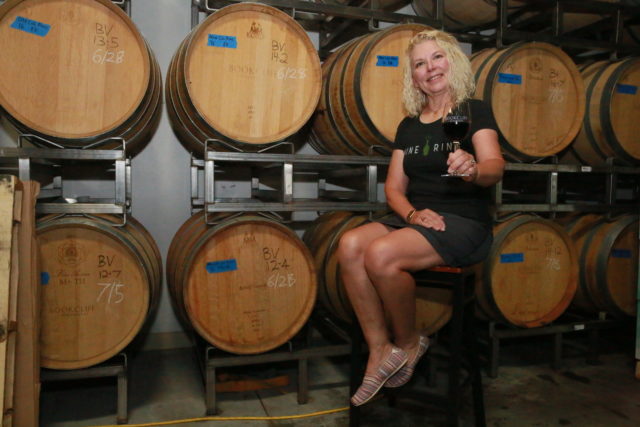 “I get more of the wood notes, just kind of that tiny bit of black pepper, but I just feel like I’m in the lumber yard,” says Sally Mohr. Mohr, a Master Sommelier who lives in Boulder, and I are tasting wines at Bookcliff Vineyards. In front of us are glasses of two wines in progress — 2015 and 2016 syrahs pulled from the barrel.

I do not taste marionberries in the wine. Nor do I taste red plum, or strawberries, or anything besides “red wine” when I sip. I notice a difference between the two, sure — the 2015 tastes “brighter” than the 2016, if that means anything — but then again, Mohr’s ability to pick out flavors, and describe them, is a skill she honed over years of training.

“When I started out in the business, I just needed a job,” Mohr says. “I had tried several other career paths and hated them all, and my husband finally got tired of me just hanging around the house and said, ‘Please go get a job. And since we spend so much money at this wine store, why don’t you just go try working there?’”

That wine store was Boulder Wine Merchant. Mohr waited six months for one of the two employees to leave, and when she started, she realized how little she knew about wine.

“I just knew I liked to drink it,” Mohr says. “And it was quite a journey because I basically went from knowing nothing … to I had to learn because the owner’s knowledge base was huge.”

So Mohr began an informal education. When an opportunity to buy the store arose a few years later, Mohr and another former staffer took it. Soon, though, Mohr found herself relying on her business partner’s wine knowledge.

“I said, you know, ‘I need to figure this out on my own. I just can’t rely on other people all the time,’ and that’s what got me going. I needed to push myself,” Mohr says.

Too, Mohr knew that wine education would help her cut through a male-dominated food industry.

“I was at a big disadvantage, because I would go to a tasting, or I’d go to a luncheon, I would meet a winemaker and, to be a bit judgmental, it was usually the European men who would look at me and refuse to answer my questions,” she says

So Mohr turned to the Court of Master Sommeliers, an organization that trains and measures one’s knowledge of wine through three tests: an oral exam on wine theory, a wine service exam and the infamous blind tasting of six wines, where the testee must name exactly the varietal, vintage and region of a wine by deducing from its color, aroma and taste. Achieving Master Sommelier status requires completion of four increasingly difficult courses. There are currently only 149 Master Sommeliers in the world.

Mohr was only the second American woman, and third in the world, to reach that status when she passed her exam in 1995.

Mohr says she got through the accreditation process quickly because there wasn’t a backlog. Today, that’s not the case. Food media has increased interest in wine, as did the 2012 documentary, SOMM, which followed four men as they prepared for their Master Sommelier test. That, and the recession of 2008, put many new faces in front of the lower level sommelier classes Mohr teaches. It doesn’t mean, however, that the tests have changed or gotten any easier.

“Everyone thinks that they can be a Master Sommelier tomorrow. They think it’s just super easy,” Mohr says, adding that of the few who make it to the final course, only 10 percent graduate.

Mohr might use a word like “gooseberry” to describe New Zealand sauvignon blanc, but if you’ve never had a gooseberry, that word is useless. Conversely, most people can pick out a strawberry if they’re told to look for it.

Tasting wine activates language, but that doesn’t mean that you have to use snooty wine words to express flavor, Mohr says. When I say a tempranillo we’re sampling at Bookcliff tastes like red Starburst, Mohr says she often recommends students buy a case of Jelly Belly jellybeans to calibrate their palate.

Because the blind test is the hallmark of Master Sommelier testing, I ask Mohr to walk me through it. It starts at the pour.

“The perfect pour for a glass is where the glass starts to curve up, that’s about as high as you want it,” Mohr says. A standard wine glass with a bowl and opening about the same size is the preferred tasting vessel, allowing aromatics to travel freely.

“Swirling is important because you want all of those esters and aromatics, some of them are pretty shy and they don’t want to come up this far, and swirling forces them out. … And then you want to put your whole nose in there,” Mohr says.

Mohr spends about three minutes swirling and sniffing. She says it’s because the olfactory sense gets fatigued quickly, so she’ll hunt for different smells on each pass until there are no more.

Mohr regards the wine’s color. Wine turns from pink and purple to red to brown as it ages, so one can generally tell the age of the wine via color. The bolder the color, the more extraction was achieved from the grapes, thus one can tell the thickness of the grape’s skin.

Legs, the drips that form when you swirl wine, indicate the amount of alcohol, sugar and extract, and the cleanliness of the glass, though reading into them “is a little bit of reading tea leaves,” she says.

Mohr says to swish the wine like mouthwash. “The acidity, the tannin, the sourness, the bitterness — the more you can hit the cracks and crevasses, the more you’ll feel it.”

Sommeliers use descriptors like tannins and acidity to indicate the structure, weight or mouthfeel of the wine. The more you salivate, the more acid it has. Mohr separates tannins into fluffy slippers and squeegee varieties. On weight, Mohr thinks of it in terms of milk — from skim to cream.

When tasting, red versus dark fruit flavors are points of comparison in red wines. If it’s white, Mohr’s looking for the taste of butter to indicate malolactic fermentation. Flavors like wood, smoke, leather or tobacco mean the wine was aged in a wood barrel.

Determining the vintage (or the year the wine was produced) requires both tasting skills and knowledge. The idea is to find indicators that would suggest a certain region’s growing year — too hot or too cold affects harvesting time and grape size, which impacts flavor, for instance — and marry them to variables of color and taste.

The key to it all is practice, Mohr says. “You just keep tasting a whole bunch of wines.”

That’s not such a bad proposition.

To hear more of our conversation with Sally Mohr, click the box below.