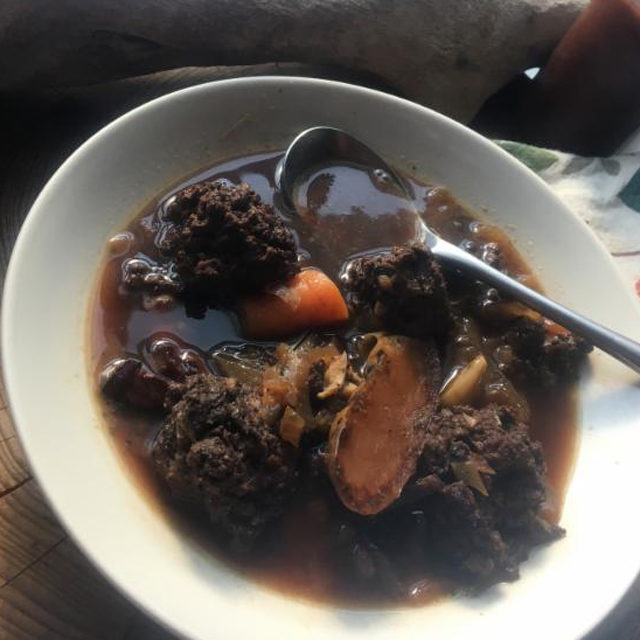 Some of my best Thanksgivings have been ones I’ve missed. This isn’t to say I’m a hater. I’m a hunter, and I have a rule: a full freezer is more important than a party.

My first Thanksgiving hunt ended without meat, and that night I joined two other hunters in a rented room at a motel in Southwest Montana. After a full, fruitless day of hunting, we dried our gear, drank Yukon Jack from the bottle and called our friends at the potlucks we could have attended. I broke out my last package of ground deer meat from the year before, and proceeded to make ham Bourguignon on the camp stove.

Despite what the name implies, there is no ham in ham Bourguignon (or hamburger, for that matter), but the first ingredient is at least bacon. It’s followed by deer, wine, onion, wine, vegetables, wine and wine. The winey, greasy steam filled the room, perfuming our hunting clothes with “human” scents. It was getting dangerously close to a party interfering with a full freezer by the time we turned in.

I spotted a herd of elk at dawn, tracked them all day, and radioed my friends at 3 p.m. with the news I’d shot my first elk. They came with a sled. Twelve hours later, the elk was in my truck. By morning on the Saturday after Thanksgiving, I was home with my meat, a proud graduate of the Loser School of Hunting.

The Loser School of Hunting is not a prestigious institution. No hunter begins the season hoping to matriculate, much less miss, the Thanksgiving feast. The foundational academic principle of Loser School is that if you haven’t filled your freezer yet, you don’t just need meat. You need practice. So you get back out there and do that, hoping to sharpen your skills enough to succeed. It could be your shooting that needs attention, or your ability to be quiet, stay focused and sense the animals before they sense you. It may depend on your willingness to go where fresh tracks take you, even if that’s away from the truck and toward the grizzlies.

As hunting season winds down, a loser will cycle through his or her usual hunting buddies until there is nothing left but misfits like us. We find buddies of buddies who still haven’t succeeded, and make plans to bed down with these strangers in tents, motel rooms or cold, mouse-infested cabins. We may still hunt alone, but it’s good to know that somebody knows generally where you are. Sometimes, when the conditions are right on the ridge lines, it can feel like outer space. Once in a while a text floats up with a delicately posed question about how it’s going.

Behind these well-intended messages, I visualize the sender, having already filled his freezer and now chilling in his sweatpants by the fire, drinking tea and planning his Thanksgiving side dishes. And I’m gonna be listening to some other hairy dude snoring.

But those strangers, hairy or not, dudes or dudettes, can be treasure troves of knowledge. They have different ways of doing all the things that a hunter must do, like keeping the falling snow off of a scope, keeping your precious water in liquid form, and, of course, cooking burger meat.

Every hunter has their ways of cooking burger. I’m not above putting a frozen chunk in a pan and letting it thaw there. With ham Bourguignon, the wine steam helps to thaw it.

On my second high country Thanksgiving, the Loser School mess hall was the Silver Dollar Saloon in Ennis, Montana. That was back before I had kids and was a raging wild man, hunting the steep, silent Madison range like a Sasquatch with a rifle. I kept moving to stay warm, and ate hard salami like granola bars. But I was a lonely, meatless Sasquatch on that Thanksgiving. The Silver Dollar had a Thanksgiving buffet, and I filled up a plate and sidled up to the bar, next to a stranger.

He was a rancher, wasn’t going to make it home that night by dark, and knew better than to drive at night. Between black ice, deer and fellow motorists, the Thanksgiving dinner was secondary to living another day to crash his snowmobile, which, based on his stories, he did quite often.

The tales of survival in the aftermath of some of these mishaps, in subzero temperatures with wet clothes and injuries, were as riveting as anything I’ve read by Jack London. I ate turkey, drank IPA and listened. When he started telling hunting stories, I asked him why he would cut the throat of an animal he just killed. My point being it was already dead. He stared at me like I was from Mars.

“You’ve never cut a throat?” he asked. His red, wind-burned face had turned ashen beneath his hat, as if he’d fallen ill just thinking about all of the unbled meat I had been consuming.

I already knew that for meat to taste good, a lot of things have to go just right. It has to be a healthy animal, on a good diet, killed with a clean shot, ideally in the cold. How hunters clean, skin and trim the body can all ruin the flavor, as can hanging an animal too long, or letting it get too warm.

Back home, I studied throat-cutting and blood-letting, and realized it’s exactly what kosher and halal butchers do, and for many good reasons. Now I go straight for the jugular. If I’m lucky, that is where my shot will hit. My hunted meat has never tasted better. If only there was more pumpkin pie in Loser School.

A quick and satisfying version of the classic boeuf Bourguignon, made with frozen ground meat. Serves 4.

Place the bacon in a large pan or pot on low/medium heat with a tight cover. Stir to prevent burning and release the grease. When the bacon is nice (about five minutes for thawed bacon) add a hunk of ground meat, frozen or thawed, to the pan. Surround it with potatoes, cut sides flat against the hot pan. When the mass of ground meat develops a brown skin below that you can feel with a spatula (about 10 minutes), add a half cup of wine. Keep covered.

When the wine is half evaporated (about 10 minutes) it will have developed a purple crust. Flip it over and flatten it out to push out the water, and make a similar crust on the other side, adding another half cup of wine after the first one dries up, and adding oil if the bacon wasn’t very fatty.

When purple crusts on both sides, break the meat as it cooks into stew-sized chunks — don’t atomize it like taco filling. Don’t overwork or the chunks will disintegrate. When the pan starts to dry out, add the minced onion and gently stir it in among the browned meat chunks. The onions add so much water it’s like another deglaze.

Stir often but gently until the minced onions disappear (about 20 minutes). Add the garlic and butter. When the garlic smells like it’s frying in butter, add the carrots, celery, stock and another cup of wine. Add the garlic powder, black pepper, salt, herbes de Provence and soy sauce. Stir it all together and cook for 25 minutes, or until the carrots are soft. Season with butter, wine, spicy stuff and gratitude. Serve with hot sauce and more wine.