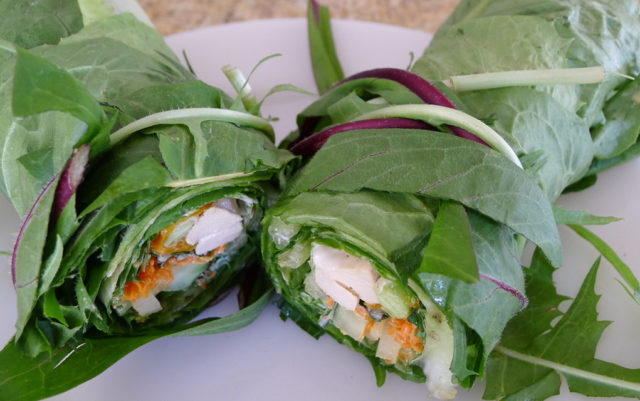 When I was a teenage prep cook, I created a dish that never made it onto the menu, even as a special, and even though it was called the Ari Special. It was a favorite among the staff. Everyone, from the absent manager to the Austrian baker, the waitress I was crushing on and the waiter on cocaine, all loved the Ari Special.

It consisted of an 8-inch baguette end stuffed with chopped deli turkey, onions, tomatoes, parsley and mayo. The mix mingled with the spongy, bready insides, while the browned exterior stayed dry.

That was decades before this kind of dish would rocket to popularity under the name “wrap,” the universal architecture of a vessel that holds different ingredients together so they can be chewed together just so, like a sandwich, only tighter. Whether it’s a tortilla-clad burrito or a spring roll held together by chewy rice paper, everyone loves a wrap.

A wrap’s character is mostly determined by its filling. At least it should be. The wrapper’s job is to contain the filling, and carby wrappers like tortillas and rice paper make supple, forgiving, leak-proof shells. The Ari Special, with its no-leak, tapered end, was ahead of its time.

In addition to its one job of holding the insides where they belong, a wrapper can also contribute to the culinary experience. A quality sourdough baguette or a warm corn tortilla can elevate a wrap, but many wrappers trade healthfulness for convenience or performance. Whole grain, multigrain, sprouted grain, spelt grain, grainy-grain and the likes don’t do it for me. They may pack fiber, protein and other nutrients, but they are boring to eat, if not dry or gobby, especially when cold.

When the wrapper is made out of lettuce, there are no empty calories. There is not a single diet on Earth, fad or classic, from the Mediterranean to South Beach, that would shun a lettuce wrap. The only problem is that lettuce wraps, technically speaking, barely exist. At least the durable, tubular, burrito-like variety. Most recipes for lettuce wraps are for boats, often overloaded, getting soggier by the minute.

Under the right conditions, a lettuce wrap will persist briefly on a serving plate, like an unstable subatomic particle. But if you stare with even a hint of desire, the contents get restless, knowing their chance at freedom is nigh.

Other leaves, like chard, cabbage, grape leaf or collard greens, make superior wrappers to lettuce, but only if they are steamed, which increases their flexibility and prevents cracking. Plunge the leaves in an ice bath after no more than 30 seconds of steam. Once dried, these leaves have a durable elasticity that can hold a wrap together in a firm grip, with or without an under layer of lettuce. It can even be folded at the bottom to prevent drip, for a truly burrito-like performance.

But I prefer my leaves raw. And I’ve always been more of a taco guy, if not a corn chip guy. I prefer my food in smaller units, because smaller units are easier to micromanage into perfect mouthfuls of just the right amount of each ingredient. Boats, it turns out, are on the right track.

My initiation into the small wrapper society came at Saigon Restaurant in Albuquerque. I thought I had just ordered a fried fish. It came with a pile of leaves and salad bar’s worth of chopped veggies, herbs and sauces. The trick, we quickly realized, is to not overload the wrapper — a universal truth in the world of wraps. Along those lines, my wife has been wrapping pieces of feta in black kale, from time to time, and popping them in her mouth, and a friend of mine likes to take the ingredients for wraps on outings.

“For us it allows on-the-fly construction,” he says. “So no smashed sandwiches, lettuce stays crisp. Plus no bloaty carbs. Just meat and vegetables.”

Loading lettuce leaves is an intuitive and fun way to eat. To help get you started, I’ll share a deconstructed version of the Ari Special, heavily influenced by the late NPR commenter and food writer Kim Williams. Her recipe for a corn-stuffed tomato was not only a contemporary of the Ari Special, but similar.

Alas, a tomato isn’t much of a wrapper compared to a baguette end or tortilla, but Williams’ corn, basil, tomato filling is spot-on. Adding chopped deli turkey brings it closer to old-school Ari Special territory, but protein is optional.

The core of this dish is learning how to eat it. Leaf loading is a new world, with its own language and customs. Each type of leaf, and even leaves from different parts of the head, will have different structure and flexibility. Let this architecture guide you as you load and fold.

1 head’s worth of raw lettuce leaves, cleaned and organized on a platter or large plate

1 ear’s worth of raw corn kernels

Mix the corn with the salt. Arrange the ingredients on a platter, in little piles or in little bowls, and serve.

To eat, load a leaf with a modest amount of filling. Aim for pieces of one-and-a-half bites each. You don’t want the pressure of having to get the whole thing in your mouth. Just take a nice bite, and you leave relatively few remains in your fingertips for a follow-up. And that’s a wrap.

Whiskey in the blood