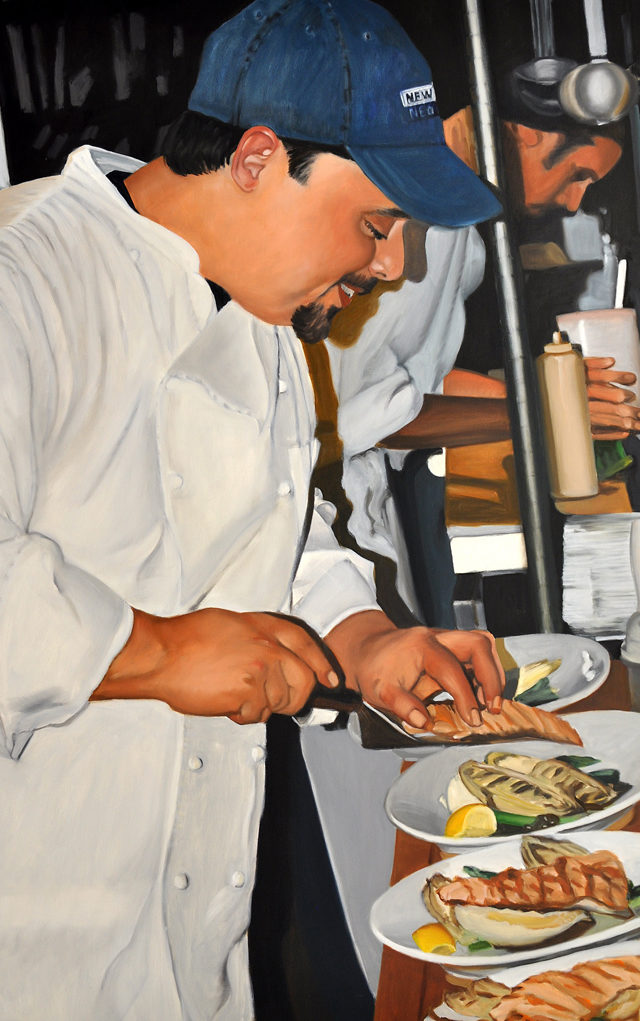 Barbara Shark is a painter. She discovered a passion for art in high school and began pursuing it as a way of life. She didn’t set out to be a cook, and certainly not a cookbook writer. For one thing, she is completely self-taught in the kitchen.

“My Mom had five kids. She baked bread and everything else from scratch. I learned a little observing my mother, but I have no memory of her teaching me how to cook anything,” Shark says.

Yet art, cooking, writing and life come together in How I Learned to Cook, An Artist’s Life. The 326-page cooking-and-life memoir is illustrated with 85 of Shark’s often photorealistic paintings and drawings, and 105 of her recipes.

Published in April, the book is a valuable social and visual history of the many artist friends, from Red Grooms to Betty Woodman, who have experienced Shark’s hospitality.

Shark’s husband, Bud, is one of the nation’s most highly regarded artist’s printmakers. The couple lives and works in Lyons, where they house artists for one- to two-week stints of printmaking, with Barbara providing many of the meals that fuel the creative process. She cooks seasonally and grabs fresh produce every summer from the Zweck family farm stand.

Once she left home and was living on her own, cooking became a necessity. “One of the first things I made was Hot Dish — that’s pasta, we call it ‘macaroni’ — with a meat sauce with canned tomatoes and onions,” says Shark.

“The big change was when I met Bud and we moved to Florence and could afford to eat out every night on fresh, beautiful food. When we moved to London in 1970, I decided to learn to really cook. We ate real Indian, Greek and Chinese cuisine for the first time. I shopped every day and used recipes from Elizabeth David’s cookbooks and made three-course menus,” she says.

The cookbook became a labor of love played out over eight years. She rewrote recipes and sharpened her oral history, telling stories with a laconic sense of humor. Shark’s painterly eye catches details and conveys a palpable sense of the people and the Colorado environment and spots around the globe where she has visited and lived.

“I wrote the book as a self-assertion from my point of view. My life is art and food. I tried to pick stories and recipes that connected to the art,” she says.

Shark’s subjects are familiar locals such as chef James Van Dyk, depcicted in the kitchen in “Cooking at the Gateway.” Others chronicle the season’s crops, as with “Spring Rhubarb,” an oil-on-canvas appreciation of the revered “pie plant.”

“I was a big reader but not a journal keeper, but as I started choosing the recipes the memories came back to me of the people. I start with my childhood and write about my life up to the present,” Shark says.

Her only advice to non-cooks is simple: “Be brave enough to do it. Pick a recipe for something you really want to eat and follow the directions. Then, make the dish again. After a while you won’t need the recipe,” she says.

Many mistakes will certainly be made though. “I was making cookies recently and I misread the recipe. I said: ‘What is wrong with this dough?’ It turned out I had left out a whole stick of butter,” she said.

With the publication of her cookbook, Shark recently launched a blog where she shares additional stories about life with recipes at: howilearnedtocookanartistslife.blog.

Shark dissuades anyone from reading her recipes — or any recipes — as received wisdom that has to be followed religiously. “Recipes are meant to be changed. I’m not the kind of cook who repeats herself, which is sort of like how I paint. I revise and reinvent the dish every time I make it,” she says.

Her twin endeavors do share a few attributes. “Painting and cooking are similar in that you take raw ingredients and make something new with them. With cooking, the creation goes away as it is eaten. For an artist working on one canvas for a month or more, that is a very liberating idea,” Shark says with a broad smile.

“Chopping an onion is very sensual and requires being present. With both cooking and painting, you want to get to the point that you are totally involved in doing this thing you know how to do, not thinking about it a lot,” she said.

Here is one of Barbara Shark’s favorite summer recipes from How I Learned to Cook, An Artist’s Life published by Boulder’s Baksun Books and available at the Boulder Book Store, the Tattered Cover Book Store and on Amazon. BMoCA will host a book-signing reception and display of Shark’s artwork on June 20. Shark said she is planning on baking and bringing cookies.

1½ cups unbleached flour (you may need a little more to make a firm, velvety dough)

Knead and let rise in an oiled bowl until doubled, about an hour. Roll and pat dough into a 12-to-14-inch wide circle. Brush with a little olive oil and put it on a baking sheet lined with a piece of foil sprinkled with cornmeal. When the grill is hot, around 400 degrees, hold the foil and baking sheet, and flip the dough onto the clean, well-oiled grill. Bake for 3 to 5 minutes, checking to be sure the fire is not too hot. Turn bread over and bake for another 3 to 5 minutes. Cut into squares and serve warm.

To make a fine grilled pizza, heat gas grill to around 400 degrees. Bake rolled-out dough on first side 3 to 5 minutes, then flip so cooked side faces up and quickly add simple toppings. Grill until done, another 2 to 3 minutes.

“Many excellent cooks are spoiled by going into the arts.” — Paul Gauguin