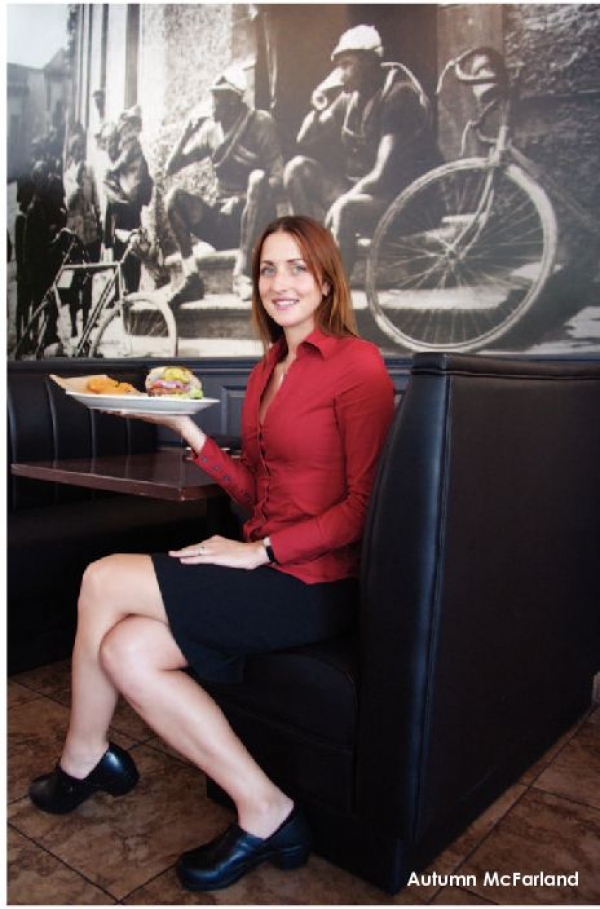 Editor’s note: Boulder Weekly received this submission from the Imagine! CORE-Longmont reviewers and decided to let them head off this week’s Cuisine section with an article on their experience at Rueben’s Burger Bistro. Imagine! is a not-for-profit program that assists adults with developmental disabilities and helps them integrate in their communities.

On your bike and hungry? Then bike on into Rueben’s Burger Bistro!

It’s by the Pearl Street Mall on Broadway and Walnut, at the site of the old Scottish Pub whose owners recently moved back home to Scotland.

When we went to write this review, we met with Autumn McFarland, the general manager of the restaurant. Autumn was courteous and attentive to our questions. She waited on our tables and clearly hadn’t “rehearsed” her answers, so nothing seemed canned or contrived. The other workers followed Autumn’s example by being polite and by providing great service.

We were able to tour the kitchen, where the staff showed us all the local, fresh foods that go into the mix. The staff also takes customers’ dietary preferences to heart by, say, cooking chicken on one burner and beef on another. The hard workers in the kitchen also followed Autumn’s exemplary lead by taking interest in our questions and by giving professional answers.

Most of the ingredients here are, indeed, quite fresh. We could tell, for example, that the fries we ate were made of top-notch stuff: not too greasy, not too brittle. Along with said fries, Rueben’s offers BBQ sauce, ketchup, the “special” fry sauce (which reminds one of Thousand Island) and mayo. Why mayo?

Cyclists love it on their fries, we were told, and this restaurant has a Tour de France theme throughout.

This theme is evident in Rueben’s menu where burgers are named after famous Tour de France locations and bike parts. In fact, Lance Armstrong’s own personal trainer and chef have eaten at Rueben’s.

All their meat is 100 percent natural: no hormones, no antibiotics. The burgers are normally served on soft pretzel buns that come in from Chicago two to four times a week. As you can tell, at Rueben’s, it’s “fresh, not frozen.” Besides pretzel buns, they also serve gluten-free and cracked wheat buns.

The meat itself is juicy, lean and well cooked. The menu is fairly flexible, especially their Alp d’Huez, which is a custom-built burger named after the steepest climb in the Tour de France. Autumn told us that one person wanted a “burger with everything,” so that customer received one huge Alp d’Huez with everything on it from beets and mushrooms to green chilis and fried eggs on top. After taking on that challenge, the customer must have felt just as exhausted as a cyclist taking on the real Alp d’Huez!

As mentioned previously, the ingredients come from as close to local as possible, part of the “slow food revolution,” as one of the staff joked with us.

In addition to fine food, Rueben’s also has a bar with all Belgian beers on tap, beers that are rotated regularly according to popular demand. The bar is equipped with two flat-screen TVs on which today they were showing highlights from the World Cup. We found out that Autumn may love soccer, but she’s not a hockey fan, due to the sport’s notorious violence.

In keeping with the
Tour de France theme, the walls are a delightful yellow, the color of
the Tour de France leader’s jersey. An avid cyclist fan, of course, the
restaurant was started only recently by Rueben Verplank, a local
entrepreneur who dreamed of starting such a bistro ever since he was a
little boy. Rueben himself, who was as welcoming as Autumn and the rest
of the staff, was nice enough to recommend a bike repair shop in the
area to one of our writers.

Overall,
the fries we ate have a “zip” thanks to the combination of delectable
spices and sea salt, the sliders are a can’t-miss appetizer, and the
refillable drinks made us feel refreshed.

Personally,
Ian loved the menu — which includes high-quality food at an affordable
price — so much, that he ran back inside to try to take it home with
him even after we left. In our opinion, Rueben’s Burger Bistro is a
place where you can get more than what you pay for.