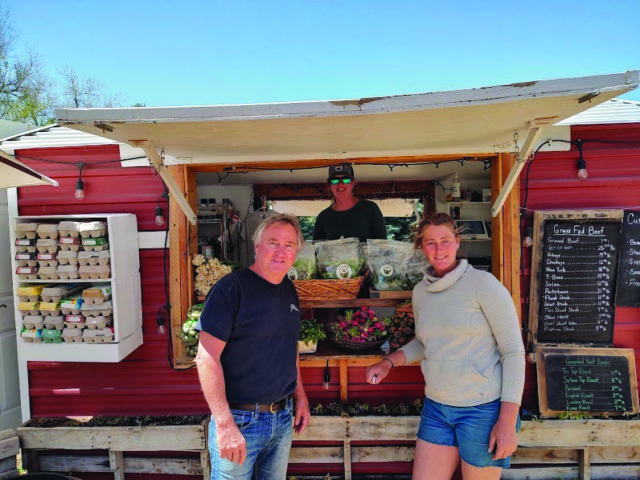 Jim Smailer is a true restaurant legend. As the longest-serving chef in recent Boulder history, he cooked for an unheard-of four decades at the Boulder Cork. Diners appreciated his devotion to sourcing fresh produce and seafood, exploring Southwestern cuisine, and serving the juiciest prime rib.

Smailer recently retired, and one afternoon this spring, he stopped to visit with an old friend, farmer Anne Cure. “I’ve known Anne for years. I got a lot of my produce from her and I just live up the street,” he says.

On the day we meet, the duo talks near the Cure Organic Farm stand, at the corner of Valmont Road and 75th Street. Bees hum around a row of hives. Jerry the goat frees himself from his pen and wanders over as customers peruse garden plant starts, chicken and duck eggs, greens, overwintered carrots and turnips and various grass-fed beef cuts

The position Smailer accepted comes with responsibilities to work at the stand and produce ready-to-eat food using the produce, meats and other ingredients available from Cure and other farms and ranches.

“I thought about it for a couple of days, and said, ‘Yup.’ It sounded like fun,” he says.

That was before he had looked at the kitchen space that the farm rents in Boulder.

“The first day I walked into the kitchen and said, ‘Oh, boy, we’re starting from scratch.’ There’s no pantry to work out of. I’ve got three induction burners and a small oven. There’s not much storage space,” Smailer says.

Yet, the fine dining chef went right back to work.

One recent week he made smoked brisket, as well as carne asada in red chili sauce. For another Saturday market, he composed a hearty soup using local pinto beans, smoked ham hocks, carrots and chilies. His red and green chili and cheese vegetarian enchiladas sold out almost immediately.

Smailer had been serving farm-to-table fare at the Boulder Cork decades before the term popped up on restaurant menus, but he’s not a fan of the term.

“For me, it had to do with finding great quality ingredients wherever they came from. This is real farm-to-table food,” he says. He’s always been an avid farmers’ market shopper and noted for his big restaurant garden, which he still maintains despite retirement.

After decades of working in that well-equipped and staffed kitchen, the chef has been forced to adjust to a new reality.

“Working by yourself in a small kitchen is hard. It takes time cleaning up. You have to wash the pots. It takes time to pack everything up and haul it because there’s no space to leave it there. Making 84 enchiladas takes a lot more time there than at the Cork,” Smailer says.

But the customers who have discovered that Smailer is on hand on Saturdays are highly enthusiastic and grateful for his continued labor at the sink, cutting board, stove and oven.

“Your pork adobo—Oh, my God! It’s so good,” one customer says. Another asks: “Are you going to do ribs again soon?”

When you have a chef at the cash register, instant and enthusiastic advice is available on how to prepare those turnips or beans or meat cuts. Smailer notes that one of his favorite parts of being a chef was coming out of the kitchen and talking to guests about the food.

In watching Smailer talking to customers, Cure smiles. “He lights up when he talks about food. This is a perfect fit,” she says.

The coming week’s menus will evolve as the farm catches up from a cool, windy and dry spring and starts producing a bevy of organic vegetables. “The tomatoes are coming!” Smailer says, along with fava beans, snap peas and okra.

“This has been interesting in a life-changing way, dealing with a new and different challenge. It’s something I’ll stick with,” he says.

That day, Smailer took home green garlic, green onions, spinach and eggs from the farm stand. He made fresh ravioli for dinner with his wife, served with a green salad and a bottle of red wine.

“No reasonable consumer would see the entire product label, reading the words ‘Frosted Strawberry Pop-Tarts’ next to a picture of a toaster pastry coated in frosting, and reasonably expect that fresh strawberries would be the sole ingredient in the Product.” —From a recent ruling by U.S. District Judge Andrew Carter

John Lehndorff hosts Radio Nibbles Thursdays on KGNU. Listen to podcasts at news.kgnu.org. Email with questions or comments to nibbles@boulderweekly.com.