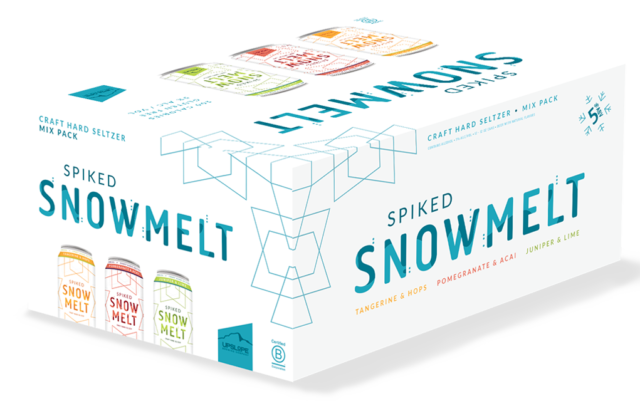 You know, we should’ve seen this coming. There were whispers. Ghosts of future day-drinking excursions. Go back to the mini-fridge in the garage of your subconscious and see if you can recall commercials for White Claw Hard Seltzer popping up on TV about a year ago.

Spend some time in a liquor store. Notice there’s probably now a rack or a whole fridge just for seltzer. Hover there. Listen. “Black cherry’s my favorite.” “Crushable.” “Let’s get three racks.”

So it’s popular, it’s got the eye of craft brewers, it’s light, it’s refreshing, OK, but what exactly is hard seltzer?

“Quite a few people were thinking that I had a wine or I had a cider or it’s beer or it’s like a liquor drink or something,” says Upslope’s Katie Hill of taste-testing Spiked Snowmelt around the county. “That’s not the case. The ingredients are carbonated water and alcohol from cane sugar.”

And a little flavoring from herbs, fruits, hops and whatever else a brewery (a seltzery?) decides. Hill says Upslope didn’t need to buy any new equipment to start tinkering with hard seltzer: “We didn’t have to re-outfit the brewery. It’s the usual setup, right down to the canning line.”

Upslope spent nine months in research and development before launching Snowmelt at its Upslope Get Down festival in May. The idea was to take a similar approach to developing flavors as the brewery does with its beer and apply it to this new form.

“Certainly in our beer-making we’re strategic in what flavors are going out,” Hill says. “The same kind of thing is going into anything we do. With Spiked Snowmelt … we didn’t want to pick the basic stuff that was out there.”

Upslope brewers found inspiration close by in their Rocky Mountain Kolsh, brewed with Colorado sage and honey, a combo that, in a beer, is unique and fun. The marriage of complementary, bold flavors became the framework for the development of Snowmelt’s initial varieties. For instance, you’ll find a lime flavor in the lineup of most of the big seltzer brands. Upslope adds juniper, an herbal element that rounds out the seltzer and makes it a good partner to gin. The other initial flavors are tangerine and hops, and pomegranate and acai.

Both Upslope’s and Oskar Blues’ offerings clock in at 100 calories and 5 percent alcohol by volume. Both are gluten-free. Oskar Blues’ have no sugar and one carb per can; Upslope’s got 2 grams of each per can.

No doubt the entire food and beverage world has been running downhill toward natural, healthy, few-ingredient products for over a decade, but seltzer, the khaki pants of drinks? Certainly we wouldn’t find ourselves at a backyard barbecue reaching for seltzer instead of beer, right?

“People wanted something they can still go out and do outdoor activities with that won’t weigh them down as much as beer,” Hill says. “We liked the idea … giving people the lighter option that’s gluten-free and that still gives them a buzz.”

The most suprising thing about hard seltzer’s rise? It’s good. There’s no weird fake-sugar or tonic tang, it’s not sweet and you don’t taste the alcohol. On your first few sips, you may miss the body and finish that comes with beer, but get to the bottom of the can and you’ll forget about it. You really should mix it in cocktails; you really should bring it on hikes or to the beach; you really should drink it if you’re gluten-free; and you really should (and likely already are or will) make it a part of your social routine.

That revelation is widespread. Hill says a surprising amount of the beer-focused patrons at Upslope have been ordering Snowmelt. They pour a dash of the Blackberry Lemon Sour Ale into the pomegranate acai. They take tangerine and hops home in cans and mix it with tequila. They order it in lieu of session ale.