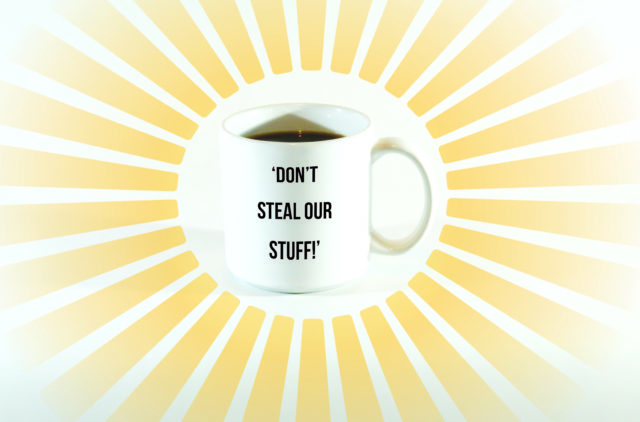 We are shoplifters. Ask local chefs and they will relate horror stories of serious thievery by their own diners. They are not talking about pocketing extra napkins and ketchup packets.

Is it worse than the customer who absconds with an entire tip jar full of money?

Take something like that at a houseware store and you likely would be grabbed by security and charged with shoplifting — arrested, cuffed and charged.

The severity of the customer pilferage problem is common knowledge in the dining industry. It popped into mainstream consciousness recently when a noted, respected local restaurateur offered a plea and public broadside aimed directly at, well, you and me and people just like us.

“There is no part of the menu price build of a restaurant or a bar that includes our guests stealing our shit. … When that copper mule mug or that Mother of Pearl caviar spoon or that Limoges bread and butter plate finds the inside of a purse or sport coat pocket and walks out our front door, it is stone-cold stealing — like the shoplifting kind of stealing.”

I asked other chefs if anything ever got stolen from their restaurants. They eagerly shared:

Chef Hosea Rosenberg (Blackbelly, Santo): “When we opened Blackbelly we had little salt dishes with tiny beautiful spoons so people could scoop the salt. Twenty-four were gone in the first month. My wife and I go down to New Mexico to grab decor for Santo. We hang these little pressed tin ornaments in the bathrooms, and have resorted to gluing them to the walls, as they always just walk out the door. We have really cool glassware for margaritas at Santo and some customers literally tell us they are going to steal them. We had a guy steal the entire 3-gallon tip jar at the butcher shop full of money.”

Chef Alex Schuler (Tangerine): “We originally bought nice demi-tasse spoons for espresso at Arugula restaurant. They matched our silverware. They went missing so fast that, after buying a couple of rounds of them, we switched to a much cheaper version and the missing spoons number went down. They were cool-looking spoons and easy for the customer to take. When people pay top dollar for a meal, some of them feel entitled to take something ‘small.’ It is theft, but somehow they convince themselves it’s not.”

Jim Pittenger (Biker Jim’s Gourmet Dogs, Denver). “You mean like the time someone stole our full-size Xena the Warrior Princess cardboard cutout? It was ballsy because Xena was in our office upstairs, so they had to steal her by going into the kitchen and climbing the stairway and snag her in plain sight, and then escape through the front door.”

The comments from restaurant people just kept on coming:

• “I buy 300 logo-ed Belgian tulip beer glasses every quarter. My staff at most breaks two a week. You can guess what happens to the others. We had someone try to steal a half-full mimosa tower. I had to chase him two blocks running at full speed to get it back.”

• “Four-foot aluminum roosters to beer signs in the bathroom to French presses to salt and pepper shakers. Even freshly planted mums.”

• “Silver bullet ramekins are a hot street item in my restaurant.”

• “It’s terrible to snag anything; my only comment is sometimes people who can’t frequent a place they like will take something as a memento to remember the experience.”

The theft epidemic also affects innocent patrons like a friend — a lovely grandmother — who tells of a recent experience at a Boulder coffee house. As she got her iced coffee the young barista told her: “Don’t take it personally but please don’t steal our glass. Every time we get a new batch with our name on them they just disappear.”

In the interest of transparency, I admit to owning a few forks and ashtrays I lifted. I used to steal menus when I was a dining critic but that was for research.

Even chefs are not totally without some guilt as one confessed anonymously:

“There may have been a restaurant that was serving Moscow Mules in these really cool copper cups. And it may have been during my friend’s wedding, and we may have all been very drunk. And we may have taken about six as a group because we wanted to have a set.”

Dave Query gets the final word:

“We love our guests and would give them the shirt off our backs in the name of hospitality, but for the love of Johnny Cash and a proper back flip into a summer river, don’t steal our stuff.”

“Always remember: If you’re alone in the kitchen and you drop the lamb, you can always just pick it up. Who’s going to know?” — Julia Child