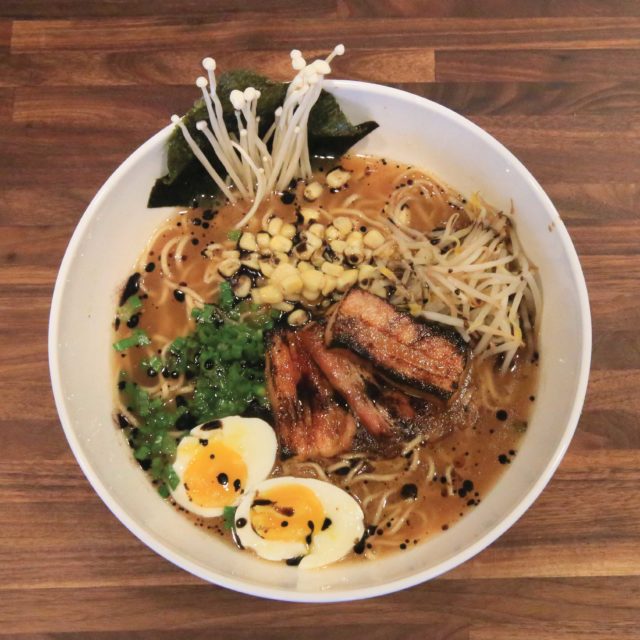 In Greek mythology, the chimera (pronounced kai-mere-uh) was a fire-breathing creature with a lion’s head, a goat’s body, a serpent’s tail and some complicated personal issues.

Edwin Zoe says he can relate. The Boulder chef and restaurateur was born in Taiwan and grew up in the middle of Missouri. He worked in his family’s Chinese restaurant, where he experienced a duality: They served sweet and sour pork to the customers and authentic Chinese specialties for their family meals. He says he felt the pull of two worlds.

After graduating from University of Coloardo-Boulder with a business degree, he turned his precise mind far away from food and toward starting a successful software company.

Still, the family business beckoned. In 2010, he opened Zoe Ma Ma with his mother, Anna Zoe, in Boulder, serving quick Chinese street food, and then opened a second location in Denver.

“Now I have an actual kitchen. At Zoe Ma Ma next door, we only have five linear feet of cooking space,” Zoe says with a look of relief. He emphasizes that Chimera’s menu doesn’t involve fusion — there’s no wienerschnitzel lo mein here. It’s a curated collection of specific dishes.

“I respect the tradition of the dish but then I add my own elements,” Zoe says. It’s all about paying attention to details.

The Zen of Noodling

Take noodles. Zoe is a bona fide noodle nerd. When he decided to focus Chimera’s menu on ramen he had to make a choice. There are loads of places in Colorado now serving the dish, but almost all use ready-to-cook, factory-made fresh or frozen ramen noodles.

“It’s not authentic. If you were a pizza restaurant you wouldn’t use frozen pizza dough and claim it was fresh,” he says.

That’s how Zoe became the proud owner of a new $40,000 noodle-making machine. He is clearly in his element showing off the machine and the minute adjustments he can make in a noodle’s dimensions and character. Nearby, big pots simmering on a stove are jammed with roast duck bones, chicken feet and pork feet to make the rich broth that is the backbone for several variations on the ramen theme.

He creates fresh, organic wheat ramen noodles that are massaged lightly to get the right texture, chew and flavor-grabbing capacity.

Zoe is something of a ramen historian. Ramen is ubiquitous in the U.S. now. The 10-for-a-dollar, plastic-wrapped noodle units are in almost every college dorm room, home pantry and office worker’s desk drawer. However, America was a ramen-free zone until 1971, when instant noodles arrived after a Chinese-Japanese chef, Momofuku Ando, invented shelf-stable dried ramen by deep-frying the noodles.

Then, about a decade ago, restaurants started opening offering “real” ramen. “Ramen is not one thing. Ramen culture in Japan is like pizza culture, which varies across Italy. You see big differences between different regions in the broth, what’s in it,” Zoe says.

At Chimera, this is anything but a quick, cheap, forgettable meal. One tasty showstopper on the menu is lobster ramen. It is a parade of textures, shapes, colors and flavors that hit all the right notes with fresh noodles in broth with enoki mushrooms, seaweed, corn kernels and a tea-marinated soft boiled egg. The dish comes with a side of drawn butter to dip the soft pieces of butter-poached lobster.

Slurping is not only allowed, it’s celebrated. “The biggest compliment I can get is when a guest picks the white bowl up to finish the last of the broth,” Zoe says.

Dumplings and bao and wings that numb

When he talks about the menu, Zoe expresses his passion for everything from the smashed cucumber appetizer to the wonderful Shanghai xiao long bao, the sip-able soup dumplings filled with broth, crabmeat and pork. It is obvious that Chimera gives him an excuse to serve the yummiest foods he found while travelling in Asia.

A Few Encouraging Words from Mom

There is a second meaning of “chimera” — a thing one wishes for that is impossible to ultimately achieve. So far Zoe seems to have created multi-faceted tastes that team up to make a singular dining destination.

Zoe’s mom now mainly oversees the Union Station Zoe Ma Ma. “She works too hard, but for her, working is like breathing,” he says.

However, Mom recently stopped by Chimera to eat. “She gave me a great compliment. She said: ‘I didn’t know you could make something this good,’” Zoe says with a proud grin.

The Happy Trails Cafe in Nederland has closed after 25 years in business. …  Among the new eateries opening this summer at the 13,000-square-foot Avanti, Boulder’s first food hall, will be Denver-based Masterpiece Deli. … Slow Food Boulder County hosts a Seed Exchange and Colorado Producers Open House March 21 at the Mountain Fountain in Hygiene. You can pick up or trade your vegetable seeds and sign up for CSAs with local farms. Schools can pick up seeds for their school gardens. … There are only 22 days until the Boulder County Farmers Market reopens for the season in Boulder and Longmont. … Do Boulder County organizations, causes or churches publish spiral-bound community cookbooks? Let me know at: Nibbles@boulderweekly.com

As anyone who has ever drunk a “near” alcohol-free beer will tell you, the beverage has questionable flavor and pointless calories. Boulder-based Hoplark cans Sparkling HopTea, high-quality black and green teas brewed with hops. It is reminiscent of a good craft beer but free from sweeteners, additives and alcohol. I tasted The Original One beverage made with organic black teas and Citra and Simcoe hops with zero calories and 70 mg of caffeine. It’s a genuinely refreshing taste with nice IPA citrus notes and a floral aroma. The tea’s slight natural sweetness balances just enough bitterness. Hoplark has plans to open a Boulder taproom soon.

“Let’s face it, a nice creamy chocolate cake does a lot for a lot of people; it does for me.” — Audrey Hepburn