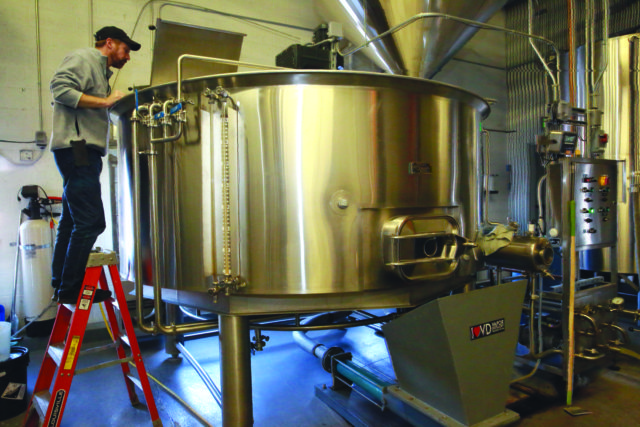 Alastair Brogan calls them an odd couple — he, a hulking Scotsman in a purple polo shirt with the bow of a ship for a jaw line, and Ted Palmer, a brainy Coloradan with an overgrown red and white beard and a sweatshirt. Together, they own Vapor Distillery in Boulder, formerly known as a name that they, or we, maybe, are no longer legally able to repeat due to a copyright dispute.

It was actually in that much-publicized name dispute that Palmer and Brogan got into business together. Palmer had the distillery relatively humming, after buying it from a hobby distiller when it was only spitting out what a three-gallon still could produce. In less than 10 years, Palmer built what would become Vapor into an award-winning producer with spirits that make you double-take — the gin and barrel-aged gin, vodka and coffee liqueur, in particular. But when investors parted ways with Palmer during the distillery’s name-dispute, it was Brogan who came in, looking for a place to make whisky with a 1,000-gallon, world-class, artisanal copper still he had purchased.

That’s right: Brogan bought the ridiculously expensive still before he had a place to put it — and now the two are diving headfirst into one of the final frontiers of American spirits: single-malt whisky.

“I’m a big believer in massive life changes, and I’ve done it a couple times: ‘Just fuck it, let’s do this,’” Brogan says.

Brogan spent a decade in the Royal Air Force, and thought he’d continue in the military as a survival guide. But when he was told he had to take a tour in the Falkland Islands, and that the survival guide gig would be taken by the time he got back, he left, “literally on a whim.” He joined the family business — fuel transportation — only to “unexpectedly sell it” a few years later. His partners (his cousins) waited a few years and then started up again “and made a shitload of money,” Brogan says, while he cut ties and jumped ship to Boulder.

“Yeah, but you’ll surpass them in few years,” Palmer says.

“Doesn’t feel like that now,” Brogan replies, only kind of joking.

Palmer spent years in the military as well, serving as a mine field navigator in the U.S. Navy. But he was perhaps more well-known among his crewmates as the guy who made really good wine on board. Palmer has been distilling, crafting and brewing alcohol since he was a kid, watching his grandfather distill liquor on a homemade set in his garage. When Palmer left the Navy, he became head brewmaster at Pyramid Brewing in Seattle, but quickly returned to his original love of craft spirits as soon as laws changed that made distilling startups easier (and far less expensive) to create.

Together, Brogan and Palmer make a formidable pair. While Palmer does things like attending wood conventions, literally eating pieces of barrels to see how they’ll age his spirits, Brogan serves as the outspoken ambassador. It’s the combination of passion and know-how; experience and boldness.

And it’ll come together in their first batch of single-malt whisky. Brogan estimates there are only about 40 single-malt whisky producers in the country, which means there is a huge opportunity for Vapor to bend the market its way. There aren’t a lot of factors that separate one single-malt whisky from another, but one small tweak in any one aspect of the process can produce radically different results. Brogan says Vapor has a few unique advantages.

It starts with the still; Vapor’s was made by the foremost still-maker in the world, Richard Forsyth. The shape of the still dramatically impacts what flavors are vaporized and then condensed back into liquid.

“When the alcohol vaporizes and goes up, what will happen before it condenses and changes back to liquid is those flavors have got to get all the way up there and then over [from the boiler to the condenser],” Brogan says, pointing to the copper tube that carries vapor from the boiler to the cooling condenser. “If [the tube] was higher, some of those flavors would fall down and break up and become different flavors that try to get up again.”

Another factor in single-malt whisky production is when the distiller starts capturing the condensed liquid. When it comes time to take the spirit from the still, first come the heads, which are mostly methanol; then the hearts, which are ethanol (and desired); and then the tails, which are mostly water. The distiller will let the methanol run first, and deciding when to start and stop capturing the liquid impacts the chemical composition, taste and texture of the spirit.

The last factor, Brogan says, that impacts whisky-making is the environment. Colorado is one of three regions in the U.S. where the water is good enough for distilling, he says — the Northeast and Northwest are the others. But altitude, weather and pressure systems all affect how the spirits work in and out of the barrels.

In Vapor’s East Boulder production facility, there is an indoor barrel-aging room. It’s not climate controlled, and it will certainly impact the flavor and color of the resulting spirits differently than, say, in Kentucky, where high humidity forces wood barrels to expand and contract differently. Too, Vapor’s single-malt whisky will require far less time in the barrel than Scotch whisky, because Scotch whisky is often made in old, used barrels, which require more time to impart color into the liquid. New barrels with a good amount of char on the inside of them, like those used at Vapor, will work in color quickly while not missing out on flavor.

Part of the challenge of barrel aging is that no two barrels taste the same. Palmer, the expert, tasted 90 barrels (nearly all of them) from the first single-malt whisky batch and pegged several for special single-barrel bottling and the rest for blending. Working on such a relatively small scale creates a more interesting product, Brogan says, to which American consumers, bred by the craft brewing scene, are receptive.

Palmer, meanwhile, says the dream is to grow Vapor enough to capitalize on its capacity. While other small producers may be shunned by distributors because they can’t produce enough product on demand, Vapor has the capacity to fill big orders of high quality spirits quickly, which sets Brogan and Palmer up well for what they think will soon be a rabid appetite for craft spirits.