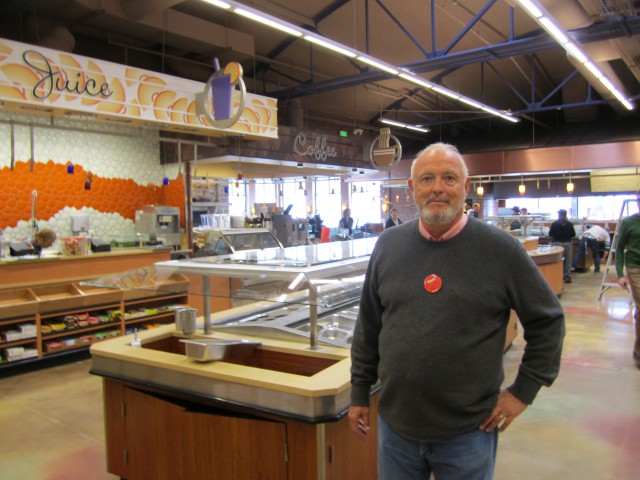 Alfalfa´s Market is returning to its roots this week with an emblematic Earth Day opening on April 22 and a commitment to local and organic products that has survived nearly three decades of change.

Mark Retzloff, an original Alfalfa’s founder, says the revived store will seek to deliver something new, exciting and innovative to the Boulder community — “an epicenter for natural and organic products in the country.”

In an age where sustainability is becoming a priority, Alfalfa’s hopes to find a new place for itself by maintaining its founding loyalty to local producers and manufacturers.

“For us, our brand is first Boulder companies,” Retzloff says. “We want to be able to represent some really interesting products that are being developed right here in Colorado.”

The original Alfalfa’s was founded in 1983 as an extension of the Pearl Street Market. It became one of the nation’s leading retailers for natural products throughout the 1980s and 1990s before Wild Oats Markets purchased the chain in 1996, to be later acquired by Whole Foods Markets.

Fifteen years after the acquisition, Retzloff and his partners Barney Feinblum, Hugo van Seenus and Jimmy Searcy have restored the Alfalfa’s name and mission at the market’s first home, located at 1651 Broadway. The new store, while paying tribute to its predecessor with original flooring and recycled brick, has nearly double the amount of retail space as the old Alfalfa’s. It features a prepared-food area — including bakery, coffee shop, juice bar, wood-fired pizza oven and Asian food from Sushi Zanmai — with an attached café and outdoor seating, a floral department that focuses on local growers and fair-trade practices for imported plants, the widest selection of cheese in the state and the only grocery-operated beer, wine and spirits shop in Boulder.

In an effort to maintain a sustainable philosophy, the market has incorporated more than 8,000 linear feet of Colorado beetle-kill pine throughout the store. It is working to be a zero-waste facility, with composting and recycling programs. Retzloff says the use of LED and CFC lighting, as well as a state of-the-art Glycol refrigeration system, are also helping to lower energy use at Alfalfa’s.

“We’ve tried to be as environmentally aware as possible,” Retzloff says.

This environmental awareness is reflected in the services Alfalfa’s will provide to its customers and its employees. The store’s parking lot is equipped with four electric car hookups and a wide spread of bike racks.

Retzloff has always been very active in the non-GMO (genetically modified organism) movement. This will carry over, he says, into the way GMOs are handled at Alfalfa’s. The store will look at every product to identify the ones that may contain GMOs. Unless a provider can validate that the product is GMO-free, it will be labeled otherwise, to inform Alfalfa’s customers.

Retzloff says that Alfalfa’s strives to make eating healthy an option for customers of any economic status, with bulk systems and bulk products like coffee, tea, oil and spices that are aimed at giving people the opportunity to get a much better value for their purchases.

Sonja Tuitele, an Alfalfa’s spokeswoman, says that Alfalfa’s will be continuing its commitment to the community by reviving many local events that it became so well-known for when it initially opened.

“I think that’s important, because I feel like there was a void after Alfalfa’s left,” Tuitele says.

Alfalfa’s has always been a big part of the community, Retzloff says. With its new beginning, he says that the store is greatly anticipating ways to get people to connect. This may prove a little challenging, as Boulder and its retail landscape have changed quite a bit.

The students and employees
of CU were not a big part of the customer base during Alfalfa’s first
go-around, Retzloff says. But this
has since changed. Young people
seem to be increasingly
interested in where their products
come from — and that is where Retzloff
’s hope is for the future of
sustainable living.

In an ever-changing community, Retzloff says the market is excited about finding more local brands to feature. As a single store, he says that Alfalfa’s will be able to be more flexible and adaptable in understanding what the Boulder community needs and broadening its selection based on  those needs.

When
Retzloff left the retail business
years ago, local and natural foods were not as much of a priority as they today. Most of the stores in town now, he says, do a great job of providing these
products to the Boulder area

“When it all gets said and done, for retailers, you have to listen to
your consumer,” Retzloff says.
“It’s all about are  walking your talk
and being authentic.”.