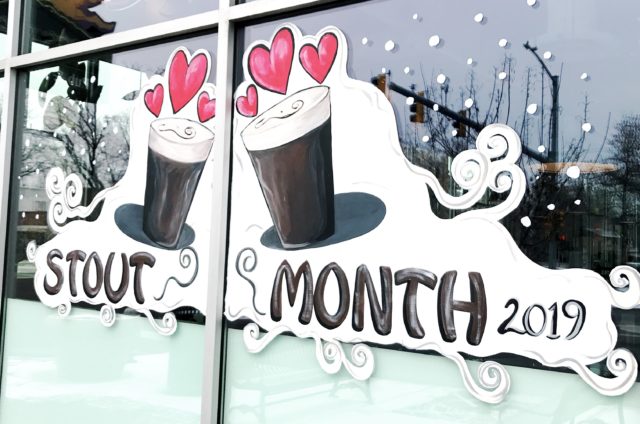 It all started in 1994 at the Mountain Sun Pub & Brewery at 1535 Pearl St. Back then, the brewery was only in its fifth month of operation, and Boulder County was home to only eight breweries.

“He just came up with this genius idea where he was going to brew as much stout as he thought he could handle,” John Fiorilli, director of brewing operations for Mountain Sun since 2009, says. “He was going to buy stout from other breweries. He was going to put all that stout on the stout tap wall and see what happened.”

What happened was everybody came in.

Harris left Colorado in 1996, but Stout Month remained a Mountain Sun staple. Every February since, the taps fade to black at Mountain Sun and its sister restaurants—Southern Sun in South Boulder (opened in 2002), Vine Street in Denver (opened in 2008), Under the Sun in South Boulder (opened in 2013) and Longs Peak Pub in Longmont (opened 2014). Back in 2020—the last time the Mountain Sun family held a proper Stout Month—no less than 36 house stouts were poured. And those stouts ran the gamut from dry to sweet, malty to hoppy, smoked to spiced: From Chocolate Dip Stout to Shadow Master Belgian-style Stout; from Ludovico’s Vanilla Cream Stout to Norwegian Wheat Stout; and from Addition Imperial Coffee Stout to NIHILIST Russian Imperial Stout.

But what makes Stout Month special is how it extends beyond the walls of the Suns. Exhibit A: Stoked Oak Stout, a masterful blend of various malts (some smoked), pure vanilla extract and toasted oak spirals. The concoction was thought up by Scott Overdorf, winner of Mountain Sun’s first Stout Month Homebrew Competition in 2007. The win encouraged Overdorf to go pro, brewing for Mountain Sun before leaving to set up his own brewery, Hobart Brewing Co., in Tasmania, Australia.

“People always ask, ‘Why stout?’” Fiorilli says. “Stout is the building block for all these flavors. . . . It’s the base beer itself that makes these flavor combinations work.”

And it’s the base concept of Stout Month that caught on with local brewers. For years, Mountain Sun has featured dozens of guest stouts alongside theirs, and this year, breweries are picking up the torch and keeping the tradition alive by hosting Stout Months of their own. Some will use the month to highlight house favorites, while others are experimenting with adjuncts and barrel aging. Lyon’s MainStage Brewery is going full throttle with the ambitious goal of tapping 28 stouts from breweries up and down the Front Range. The tradition is alive and well.

But back at Mountain Sun, things look a little different. The March 2020 lockdown that shut everyone down kept Mountain Sun closed while its sister pubs pivoted to to-go and patio sales. The fits and starts of pandemic-era restrictions didn’t make anything easier, nor did the staffing shortages of the restaurant industry. All five Mountain Sun pubs rely on a unique service model that cross-trains staff on front and back of house positions. That works great when everything is up and running, not so much when you’re starting from scratch.

But after almost two full years, Mountain Sun is back in operation. As of Feb. 5, Mountain Sun is open from 3-11 p.m. Thursdays through Saturdays, 3-10 p.m. on Sundays. Those hours will no doubt expand as spring approaches, so check mountainsunpub.com for more. That’s where you’ll find information on all the Mountain Sun pubs, including Under the Sun at 627 S. Broadway. At last check, Under the Sun had three imperial stouts pouring: Megatron, NIHILIST and Oatimus Prime. They might still be available by the time you read this, or three new stouts may have taken their spot. That’s always been part of the charm of Stout Month. The stout you shall have, but which one is the adventure .

Michael J. Casey is the author of Boulder County Beer, a refreshing history of how brewers like Harris and Fiorilli turned the cities of Boulder, Longmont, and beyond into ground zero for craft beer in the Centennial State.