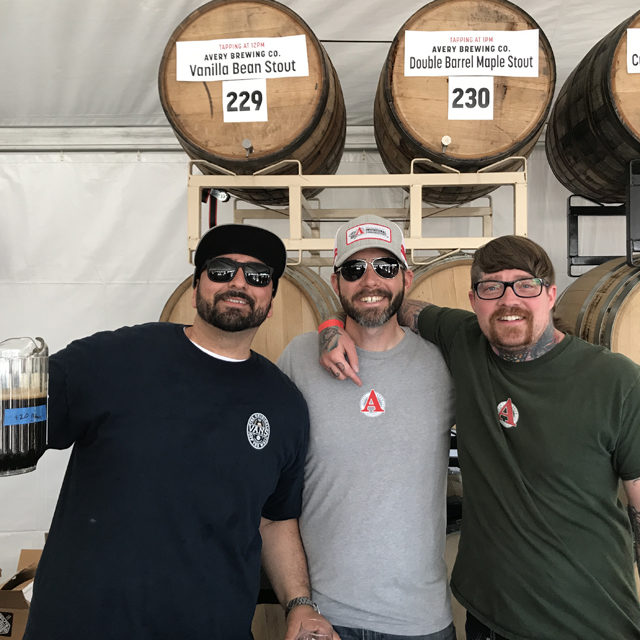 On June 8, Avery Brewing Company celebrated its second annual Avery Invitational, its anniversary party with an invited 60 guest breweries pouring over 200 beers. With an additional 40 beers from Avery’s taproom, barrels and cellar, it was one heck of a beer adventure.

Like most beer festivals, the Avery Invitational began with a branded taster glass, thirsty drinkers sporting pretzel necklaces and the faint whiff of sunscreen in the air. But once the guests waiting in line were handed the day’s tap list, the mood shifted. Some grabbed for golf pencils and started crossing off old familiars while others start circling the can’t-misses. Many uncapped highlighters and cross-referenced the legal-sized list for rarities and long-gone favorites against various beer tracking apps on their phones. Adventure motivated these drinkers as they took note of the scheduled barrel tappings, raced across the parking lot to the out-of-state legacy breweries and wrapped their lips around pours from Avery’s 2015 Czar — an imperial stout that has softened, deepened and picked up a delicious flavor of toffee peanuts with four years in the bottle.

Other favorites included Sarah’s Spicy Sorpreso — a barrel-aged sour ale brewed with jalapeño and agave that would accompany pico de gallo and a basket of chips with remarkable proficiency — and Ask Again L8er, a pineapple basil sour ale made in collaboration with Parry Pizzeria & Bar that would go oh-so-well with Parry’s white pie, The Pearl.

The only drawback to a beer festival is that a two-ounce pour can only suggest, not represent, the true aroma and rich flavor of all these wonderful ales and lagers. Which explains why Avery went to the trouble to produce hard copies of the tap list — it promoted note taking and thoughtful drinking. You can’t say that about every beer festival, but there are some worth putting on your radar for this summer. With parking lot drinking season just getting underway, here are a couple more to watch for:

Rocky Mountain Beer Festival (Louisville Community Park, 955 Bella Vista Drive, Louisville) June 22, 1-6 p.m. Tickets for this one start at $15, which is ideal for those looking for a good time without breaking the bank. Plus, you can try one of Old Colorado Brewing Co.’s traditional ales without having to drive up to Wellington.

Hooplagers: The Lager Hoopla! (Wibby Brewing, 209 Emery St., Longmont) July 20, 12:15-5 p.m. Wibby knows lager, and they know how to throw a party. Part anniversary party, part pool party, part food drive, part silent disco, all lager love, Hoopla is becoming a Longmont must. And with 45 breweries joining in on the fun, it’s hard to say no. Tickets start at $36.