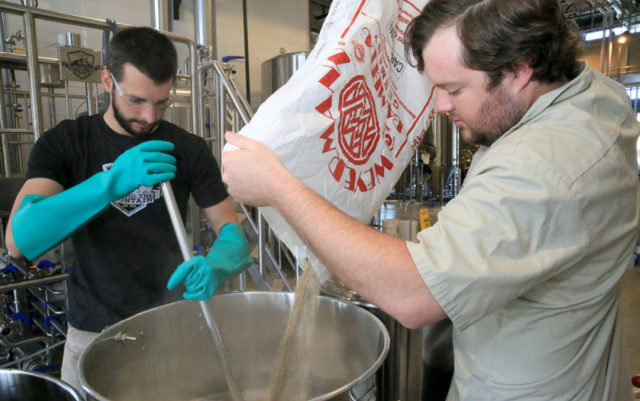 Just a few weeks ago, Vindication Brewing closed up shop and left many Gunbarrel residents and professionals wondering where, oh where, they were going to wet their whistle. Sure, there’s Avery, Asher, Finkel & Garf and Gunbarrel Brewing within spitting distance, but when it comes to pounding pints after work, one less option is not exactly what we are looking for.

Luckily a new brewery was waiting in the wings, and this one comes with the added dimension of tunes. Beyond the Mountain Brewing Company (BTM), which opened in late 2017 in an office park near Medtronic and QUALCOMM, is a haven for jam-band enthusiasts and craft beer drinkers alike. Over the bar hangs a photo of two men carrying a keg across Colorado Avenue in Telluride, an homage to Phish’s album cover for Colorado ’88.

If that didn’t tip you off, then the collage of concert ticket stubs decorating the bar top certainly will. There’s even a sizeable stage for performances and a projector screen for live-streamed concerts. You wouldn’t suspect it walking in, but this place might be a little more Boulder than Boulder is these days.

The music theme continues into the glass with a handful of BTM’s brews made in collaboration with touring bands. Take Sweet Lillies Saison, made in collaboration with the folk band, The Sweet Lillies. Extremely pale in color but full in flavor, this saison is delightfully yeasty with a pleasant shot of perky honey. Let it sit too long, and you’ll find the honey becomes cloying. But with a brew this tasty, that’s not going to happen often.

Hailing from Boston, it’s no surprise jam band The Jauntee picked a hazy double India pale ale (IPA) for their collaboration, Headspin. It’s cloudy but not nearly as turbid as other New England IPAs; the nose is fresh, the mouth is loaded with juice and, as a bonus, Headspin comes with a nice, stiff backbone — 88 international bittering units — giving the ale a delightful structure.

But the best beer BTM makes isn’t a collab; it’s the pale ale, Touch of Jade. Beautifully bright with an attractive goldenrod color, Touch of Jade’s bouquet sings of stone fruit (apricot and peach primarily) with a hint of sticky herbs. And thanks to the New Zealand Jade Hop, black pepper balances out the hoppy flavor and leaves just enough juice to brighten up the backend.

Though BTM has 11 taps pouring, those looking for extreme beers with high ABVs (alcohol by volume) might want to search elsewhere; this place likes to keep everything on the mellow side — even their Double IPA comes in light at 7.7 percent. The name of the game here is session, so sit back, relax, order another round and enjoy the music. You’ll forget work in no time at all.