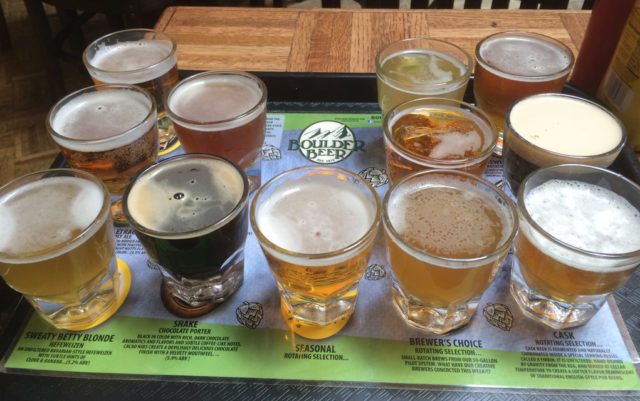 It’s been a little over a year since we started this tour of Boulder County breweries. Back then, 51 breweries and brewpubs dotted the landscape; now, we are up to 56 — expanding by six, shrinking by one. That one, Walnut Brewery, took down its name on June 4, 2017, but the location still produces beer. The brewpub is now owned and operated by the Boulder Beer Company, Colorado’s first craft brewery.

Boulder Beer’s Wilderness Place location was the first brewery we visited all those beers ago, so it seems only fitting we should tie up this package, close up shop and bid adieu to this tour from this matching bookend of brew.

Opened 27 years ago, the Walnut Brewery was Boulder’s original brewpub and thanks to its downtown location, was a favorite of locals and students alike. With solid beers, a loyalty mug program and a stellar happy hour, Walnut Brewing was the place to knock back a pint, or three.

Not much has changed since Boulder Beer took over the reins. They blew out the cobwebs — and some of the charm — knocked out a few booths and installed more tables, expanded the beer list, updated the menu and added a couple Skee-Ball machines in the back. For the most part, it’s still the same old haunt.

That’s partly because Boulder Beer kept Walnut’s head brewer, Rodney Taylor, and a couple of Walnut’s signature brews — Old Elk Brown Ale and St. James Irish Red — to play alongside Boulder Beer’s signature Mojo IPA, Shake Porter and Hazed Hoppy Session Ale. But the fun doesn’t stop there, Boulder Beer is turning their Walnut location into an research and development facility, one that will offer drinkers a chance to quaff many a rotator. From Black Axe, a dark lager with lovely roasted malts and just enough carbon dioxide to keep the palate lively, to Dr. Evil, a Belgian IPA with a deep golden color, a pillowy head of suds and full mouth of hops. There’s even the requisite New England IPA, Due East (7.1 percent alcohol by volume), which can be drunk either from a CO2 tap or the cask. Both offerings exhibit hops and juice without too much bitterness, with the cask version clearing up the IPA’s signature haze considerably.

There is something oddly poetic about Boulder Beer’s New England IPA from the cask; it’s the perfect example of looking forward and back at the same time. There is another beer on the menu that accomplishes that: Buffalo Gold. A year ago, both Boulder Beer and Walnut Brewing had their own versions of the easy drinking golden ale with the same name, but now only one recipe survives — the one whose brewer’s name is on the door.

You can still drink Buffalo Gold all day long on Walnut, but if it tastes slightly different, then just remember: you can’t step in the same river twice. The times they are a-changin’.