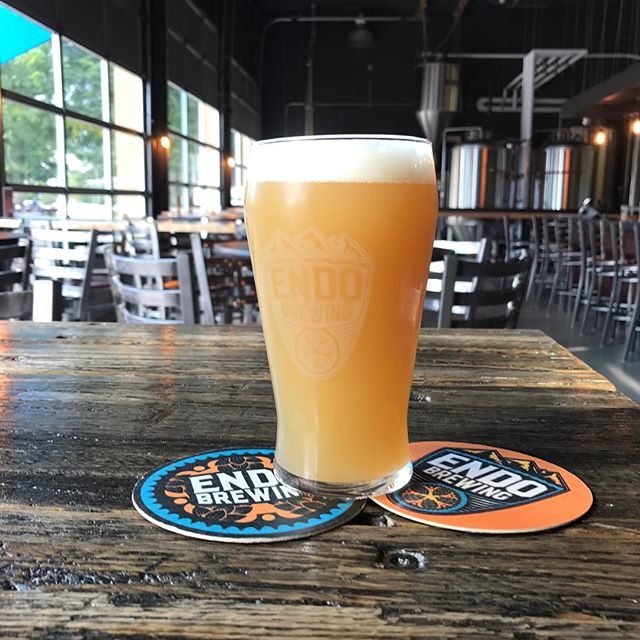 With more than 40 craft breweries in Boulder County, it’s not enough to just serve beer anymore. Nowadays, you have to have a beer-adjacent hook. Some are more complex than others, but at Endo Brewing Company, Lafayette’s newest craft brewery, the hook is simple: bicycles.

Started by two guys with a passion for mountain biking, Endo — derived from tumbling “end over end” — occupies an old five-car service repair shop in a Lafayette suburban strip mall complete with eateries and a liquor store. Endo’s still a repair and tune-up shop, only the emphasis has shifted from four wheels to two. Here you can quaff a pint while they work on your bike. Not a bad way to recuperate from a hard ride.

The bicycle theme continues into the glass with all nine of Endo’s offerings. For those looking for something malty, Knobby is a sweet stout as dark as the tires it’s named after. But it’s also light enough not to weigh you down, and with a huge nose of roasted coffee, it might even perk you up.

Endo’s beers are all on the lighter side with one exception — the Belgian tripel, Tricycle (8.7 percent alcohol by volume). All their other beers come in under seven percent ABV, important if you plan on riding in and riding out. This is a brewery designed for refreshing their clientele, and nothing is more refreshing than their German kölsch, Post Ride Ultra. As far as kölsches go, this is one of the best around; fuller than most with lovely hints of apricot and plenty of carbonation, which is what gives Post Ride that brightening and refreshing quality. Endo calls it “the pint of gold at the end of a long grinder.” But you could also start your ride with a pint and make time for more at the halfway point.

If you need just a little more body, but no more alcohol, Hardtail, Endo’s hefeweizen, is cloudy in the glass with beautiful lacing, and aromas of tropical fruit and lemon. If you still need to take it up one more notch, Endo’s Belgian saison, French Pedaler, is fall in a glass, complete with a woody aroma, a peppery back-end and the color of autumn.

And since this is America, we must talk about IPAs. Endo has three for the hopheads: Two-by-Ten, Shop and Kingdom Trails. Both Two-by-Ten and Shop are classic examples of West Coast IPAs: clear as a bell with lemon and pine aromas and enough hop burn to know what you’ve got. But the best of the three is Kingdom Trails, a hazy New England IPA with loads of grapefruit and subdued bitterness.

If you’re done riding for the day, Kingdom Trails is the brew for you. You won’t want to do much after a couple of pints and that’s just fine. Life isn’t always about movement; sometimes you’ve got to sit still.