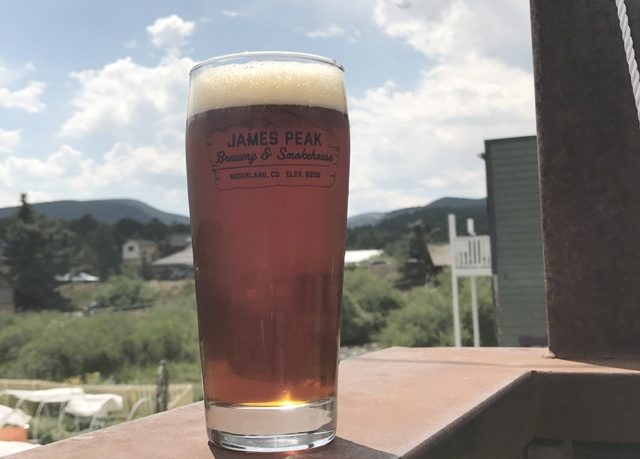 Named after the nearby 13,000-foot mountain — the second tallest peak in the surrounding wilderness — the James Peak Brewery & Smokehouse has elevation on its mind. It even goes so far as to incorporate it into the logo. That’s partly out of pride, and partly to remind you things work a little differently up there. Life may move a little slower, but the beer hits you a heck of a lot faster. Ah, the beauty of high-altitude drinking: more bang for your buck.

In addition to a slight lack of oxygen, James Peak Brewery might be the most picturesque place to drink in Nederland. Originally built by Tom Boogaard in 2007 for his Wild Mountain Smokehouse & Brewery, the building has the distinct look of a large rustic cabin that overlooks Boulder Creek. After nine years of beer and barbecue, Wild Mountain closed its doors in September 2016 and opened up as the James Peak Brewery & Smokehouse in November under new ownership.

The ownership isn’t the only thing that changed, and the new name, one that puts the brewing part of the equation first, is a dead giveaway. James Peak currently offers three in-house beers — Belgian Witbier, Elkhorn Brown Porter and Nedhead Red — a couple guest taps, wine and spirits for you to kick back with on the patio. On a clear day, you can see Eldora Mountain Resort. On a rainy one, you’ll just be enjoying the Boulder Creek washing by. Either way, the beer tastes exactly the same.

Lovely and cloudy in the glass, James Peak’s Belgian Witbier (5 percent alcohol by volume) is crisp, clean and refreshing all the way down. A good witbier should be light with a touch of sourness, and James Peak’s offering has both in spades. It’s the kind of beer that you drink to lubricate the gears, get the ball rolling and open up the palate for smoky, savory meats.

Elkhorn Brown Porter (5.6 percent) is the kind of beer you’ll want during dinner. Dark brown in the glass, this beer features just the right amount of roasted malts to play nicely alongside James Peak’s sweet barbecue sauce and char.

Both the Belgian Witbier and the Elkhorn Brown Porter are on the lighter side. Should you need a little more bitterness in your brew, Nedhead Red (six percent) has you covered. With a nose of hops and pine to match the outdoors, this beer pricks the palate with 35 international bittering units and washes away any leftover smoke and salt from dinner. You could drink it with your meal, or use it as a digestif. Either way, Nedhead Red props you up for the next adventure, be it at the bar or out the door.