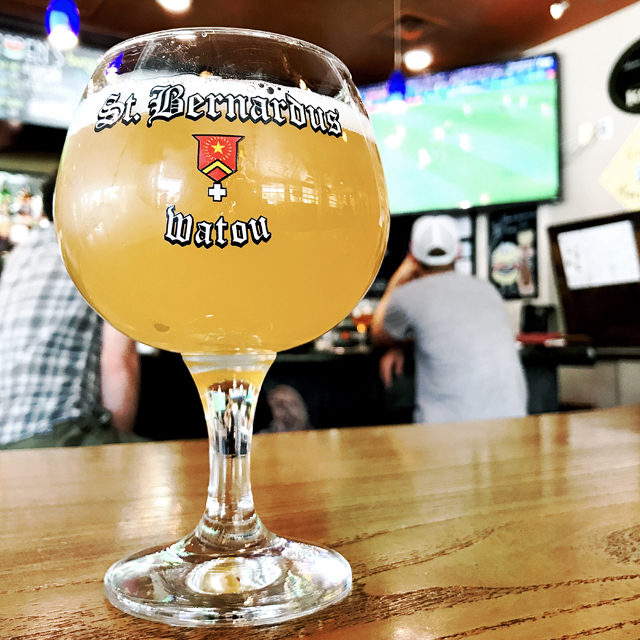 The Brewers Association — the not-for-profit trade association dedicated to small and independent brewers — counts over 6,300 breweries in America, a figure that boggles the mind and quivers the liver. And while we’d like to stop in and try a pint at every single one, that’s simply not possible. Plus, it would mean forgoing nation-appropriate beverages every time an international sporting event is on. Xenophobes we are not.

And for June and July, the international sporting event du jour is the World Cup; a battle between nations that know that football is the beautiful game, where you pass with your feet and block with a tackle. Even better, one of the best teams on the field also hails from one of the greatest beer nations on the planet: Belgium. And where does one quaff some of those fine Flemish ales? Simple: Rueben’s Burger Bistro.

Located at the northwest corner of Broadway and Walnut, Rueben’s is a few steps away from the Pearl Street shopping district, making it a perfect place to duck in for either a bite, a quick quaff or a penalty kick. Serving burgers to salads and back (the fries, in particular, are perfect: crisp and oily shells encasing light and fluffy potatoes, lightly salted and served with fry sauce), Rueben’s would be a standard sports bar if not for the extensive drink menu. Coming in at a whopping 20 pages — some devoted to explaining the origins of certain beers and the glassware used — this is a classy establishment. Rueben’s pours everything from Trappist brews to hop-assertive American ales.

But we’re here for the Belgians, and Rueben’s has a daily deal for us. Drinking on a Sunday? Order the Pauwel Kwak (a strong pale ale served in a glass reminiscent of a science lab beaker), and it’ll knock two bucks off your tab. Battling the Mondays? Throw back a Chimay Cinq Cents (equal parts sweet and bitter, those monks know what they are doing), and it’ll toss $2 right off the bill. Need something to spruce up a Tuesday? Have them sling a Tripel Karmeliet (a bright and lemony blond with a creamy mouth) across the bar, and you’ll get… Oh, you get where this is going.

The $2 deals continue all week. Wednesday is for St. Bernardus Abt 12 (bittersweet malt balanced out with hops). Thursday belongs to Duchesse de Bourgogne (sour fruit and dark chocolate). Friday’s deal goes to Gulden Draak (big and sweet; caramel and cacao). And Saturdays sport Piraat, a beautiful and velvety beer that comes with a head piled up like meringue.

All come in their own chalice, have a specific pour and are saturated with history. While American tastes change at a breakneck pace, so do our beer styles. Not so in Belgium. There’s a little bit of history in every glass, a history worth exploring, World Cup or not.