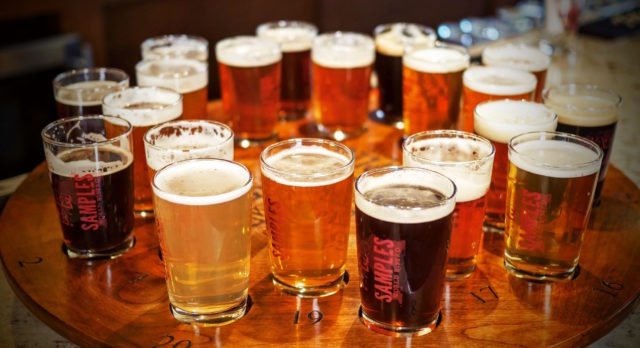 There are over 6,300 breweries in America as of 2017, according to the Brewers Association. And though we would like to stop in and try a pint at every single one, that’s just not possible. Plus, it would mean missing out on one of life’s greatest pastimes: barhopping (as opposed to brewery hopping).

For April, hop on over to Samples in Longmont. For two years running, craftbeer.com readers have chosen Samples as Colorado’s Great American Beer Bar. And, honestly, once you spend a little time in Samples, it’s easy to see why.

The neon sign in the window demands you “EAT MORE BEER” as you enter the large, yet surprisingly, quiet space. Community tables line the front, which is well-lit by large windows overlooking Longmont’s Old Town Main Street. Head to the back, and you’ll find a handful of booths and a half-dozen tables and chairs arranged spaciously next to Samples’ long bar top. Behind the bar, a giant TV projection screen sits above 28 taps. Surrounding the screen, large, wooden palettes called “beerquators” hang, but more on those later. For now, let your eyes drift to the kitchen where the usual swinging doors have been nixed in favor of an entrance portal cut into the shape of a conic pint glass. Behind the portal, a false back wall painted lager yellow with a thick white head of foam. They eat more beer at Samples, and they see it, too.

We’d be remiss if we spent more than two or three pints at Samples without something to nosh. The food here is good, higher-end gastropub fare, but not too fancy-schmancy. Instead, owners Mark and Carmen Sample stick to the type of comfort food that beer drinkers need after a session at the bar. Their signature: the poutine burger — fries and fried cheese curds piled precariously atop a hamburger patty and smothered in brown gravy. Ideal for soaking up anything you pour down.

And you’ll need it with their extensive beer menu. Pouring roughly 60 offerings — arranged according to flavor profile, from clean/crisp to herbal/spicy — Samples features much more than a slew of Colorado brews. Here you’ll find heavy hitters from Oregon (Ninkasi), Pennsylvania (Victory), New York (Ommegang) and, be still my beating heart, Belgium. They offer many Belgians by the bottle, but when you see Duchesse de Bourgogne — a magnificent chocolate brown sour from Vichte — on tap, you don’t look before you leap. And when she comes to the table in her signature chalice, you know you’ve chosen wisely.

There’s no reason to stop with the Duchesse when Crooked Stave, Grimm Brothers and Wibby are all on tap, as well. That’s why Samples offers the beerquators, those wood palettes hanging by the TV. Feeling adventurous? Plunk down $40, and they’ll load one up with 20 different samples. If you can identify all 20 beers, you’ll walk away with $500. More than enough to cover the meal, the Uber ride home and all the aspirin you’ll need for the morning after.