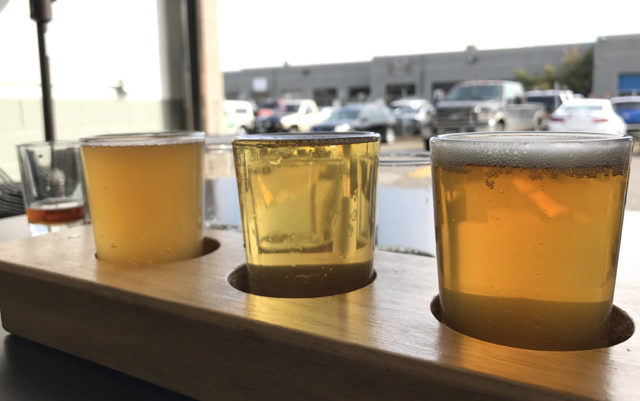 If you’ve been drinking in the Boulder craft scene for a while, the Stein Brewing Company — located at 2516 49th St., Suite 5 — may seem familiar. And you’d be correct: from January 2013 to August 2018, this was the home of J Wells Brewery.

Located in an industrial garage space and run by Jamie Wells, J Wells Brewery was a proud nano-brewery surrounded by a county’s worth of heavy hitters. And that doesn’t seem to be something the Stein Brewing Company looks to change. As the beer-tender says while pouring a taster of Hop Haze, “Everything’s the same, just a new owner.” Though those new owners took over roughly a year ago, J Wells has formally been re-branded as Stein Brewing Company as of August, complete with a four-barrel brewing system, 10 fermenting vessels, garage locale and all.

Based on what’s brewing — this is small-batch, after all — Stein has 10 beers on tap: five regulars and five specials. As the name denotes, the regulars lean toward German origin: Rye Kölsch, brilliantly clear with a goldenrod color, clean nose and just enough chewy cereal grain underneath a crisp finish; Hefeweizen, golden and hazy in appearance, banana and clove in taste with an attractive stream of carbonation reminiscent of Champagne; Red IPA, smoky and leathery; P.G. IPA; and Rye IPA — more on those two later.

Currently in the specialty column are Dunkelweissen, sporting more banana than chocolate, a boozy Wheatwine Ale, which is both syrupy sweet and granola-y chewy; Lights Out Stout, a big and roasty imperial stout; and Hop Haze IPA, a throwback to the J Wells days.

Rye IPA, probably Stein’s best, adds 40 percent rye malt and flaked rye to the grain bill to give the beer a little more complexity. The appearance is cloudy yellow with a sticky lacing down the glass. The nose is inviting: musty in a damp woodsy kind of way, dank in a not-quite-hemp/not-quite-not sort of way. The flavor highlights lupulin with a touch of burn in the back and a hint of astringency in the finish. It’s a beer that doesn’t try to trick you: you’re drinking IPA all the way down.

But if you still need to take it up a tick, Hop Haze is the brewery’s version of an Imperial IPA, big and boozy with a hint of honey on the finish. Yeah, it’s sweet, but with 120 international bittering units, there is a bit of a balance to the beast.

Fare thee well, J Wells, and welcome Stein Brewing. Yes, the name has changed, but the drinking remains more or less the same.