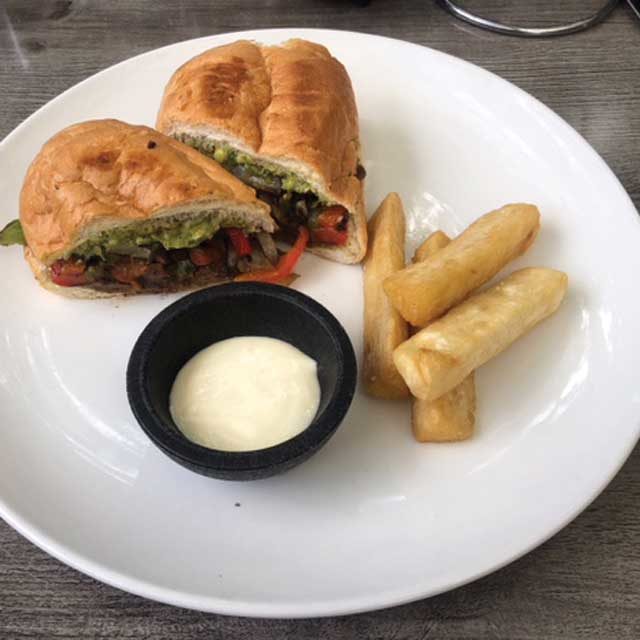 We all pretty much know that tacos are a staple of Mexican cuisine, at least Mexican cuisine found in the U.S. But it’s always delightful to see the not-so-common torta on a lunch menu around here. Take, for example, the ones at Centro Mexican Kitchen. We chose the carne asada torta, served on a fluffy, brioche-type bun. The Mexican sandwich is composed of grilled skirt steak, cheese, guacamole, caramelized onions and rajas — delightfully roasted poblano peppers. After construction, the entire thing is then grilled and served hot with a side of yucca fries and a habanero-malt vinegar aioli dipping sauce. The traditional Mexican flavors stand out wrapped in the lightly buttered bread. Filling and delicious. $14.

Parma has a big menu of red-sauce classics from veal parm to spaghetti aglio e olio to pizzas, paninis and much more. We were inspired by the recent cold snap to stop in for pappardelle cinghiale, a dish with long, broad egg pasta in a robust wild boar ragu. The torn boar meat is tender and has levels of flavor — think short ribs — and the sauce is composed of tomatoes, carrots, herbs and braised boar drippings — think Bolognese. It’s a welcoming dish that quickly envelops you in its richness. $15.

It’s camping season again and on a chilly night around a fire, there’s no more appropriate beer than Wild Woods’ Campfire Red Ale. It’s light enough to enjoy in the heat of summer, but has a strong enough backbone to hold up on cold nights. It’s malty, a little sweet and has enough smokiness to let you know it’s there without overwhelming your palate. Prices vary.

The folks at Boulder Burger on the Hill know how to make a patty melt. A pressed beef patty, Swiss cheese and caramelized onions are placed between two perfectly buttered and toasted pieces of bread. It’s warm, gooey, savory, sweet, salty… everything you want in a patty melt. Get Boulder Burger’s fries while you’re at it — thick-cut, with the skin on and the perfect amount of salt. $9.50.