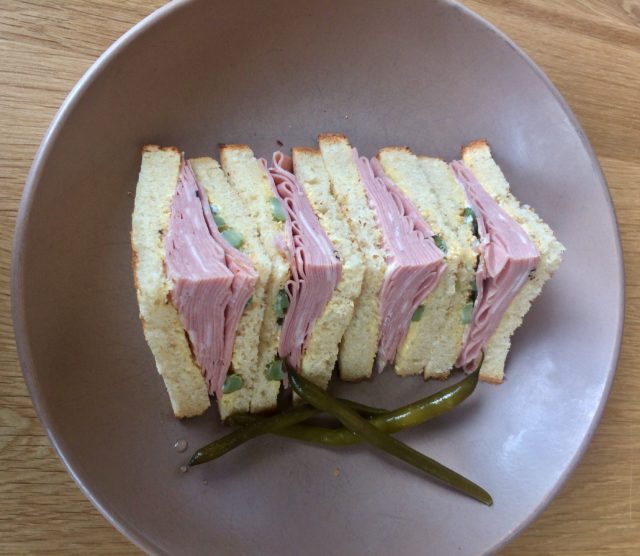 You’ve had a ham sandwich before. The kind you assemble hastily with ingredients pulled from the fridge, placed between white bread. Imagine the absolute best possible version of that sandwich, then go to Dry Storage and try it. The boutique deli, coffee, drink and flour shop is the latest from Basta’s Kelly Whitaker and the idea is to make beautiful breads and pastries and marry them with few, but high-quality ingredients in sandwiches and small plates. Back to the ham sandwich: mortadella is thinly sliced and piled high atop thick slices of a Pullman loaf — white bread with a dense, moist interior and a crispy edge. Dijonaise (mayo and Dijon mustard) brings a little spice and fat, and thinly sliced cornichons (French pickles) add some brine and pop. You’ll be blown away by the attention to detail in this sandwich, and you’ll probably rethink your own sandwich creations in the future. $12.

What’s better than a pulled pork sandwich? A pulled pork sandwich topped with bacon and smoked sausage. The appropriately named Ultimate Porker is the flagship creation of the Still Smokin food truck. A chewy bun is filled with tender pulled park, lightly charred and smoked pork sausage and crispy, thick bacon. The addition of one of Still Smokin’s half-dozen sauces (we chose the Georgia mustard with a few dashes of the Atomic) brightens up the mash of meat. $9.

We’re excited that 4 Noses is planning to open the Oak Addendum taproom in Boulder later this year (if all goes well), because we’ve enjoyed the Broomfield brewery’s lineup of beer at their taproom and in cans. To celebrate, we recently sampled the Bubblin’ Brut IPA. Simcoe hops make it extra dry and piney, and the carbonation is refreshing. You’ll taste the 7.5 percent ABV if you drink it too fast, but why rush a celebration? Prices vary.

So, Taste of Philly recently closed in Boulder, reducing the number of places to get a cheesesteak by one. Luckily, Salvaggio’s makes a pretty dynamite version just around the corner. Tender chopped steak is topped with your preferred combo of onions, peppers, mushrooms and your choice of cheese. And Salvaggio’s classic hoagie rolls make for a perfect vessel to enjoy the cheesesteak. $7.25-$12.95.