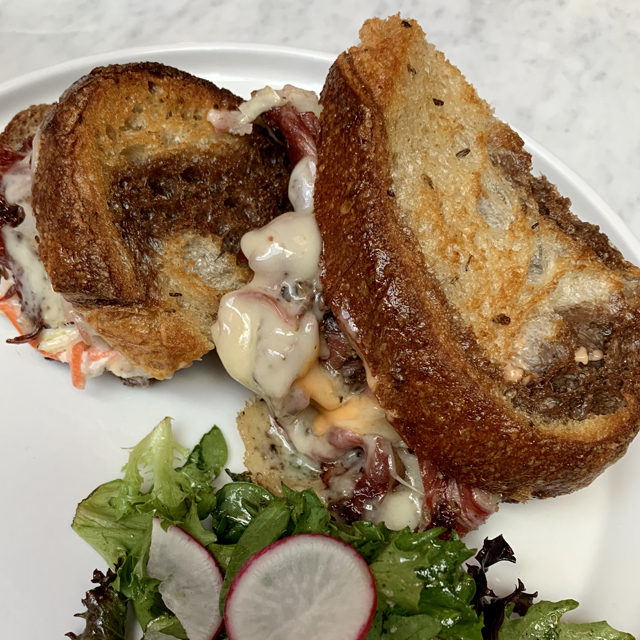 There’s a lot to take in when you enter Boulder’s new food hall, Rosetta Hall. People are bouncing around between the bar, the food stalls and the common dining areas. Each food stall is a vignette of culinary activity, with three or four cooks preparing food, while another rings up customers. We wouldn’t blame you if Folsom Foods, the first booth at the west entrance, was as far as you made it. You also wouldn’t be disappointed. Chef Justin Brunson’s American classics, using Colorado-cured meats and locally sourced ingredients, are excellent. Take the Colorado pastrami sandwich, with tender, well-spiced pastrami piled high on crunchy-crusted and toasted marble rye, along with Swiss cheese, Thousand Island dressing and bright, juicy coleslaw.  $13.50.

Just when you think breakfast has run out of moves, a place like Breakfast Champion comes along and gives you the borek. The Eastern European and Mediterranean pastry is made of rolled phyllo-like dough and any number of fillings. Breakfast Champion loads a slightly chewy, buttery dough with spiced beef and onion, and tops it with sesame seeds. It’s all lightly toasted. Somewhere between a burrito and a stromboli, the borek is a welcome addition to the breakfast lineup. $3.99.

Boulder’s Upstart Kombucha produces a lineup of the fermented tea that packs big flavor. Its Berry Black, Mint Green and Rosebud varieties are all worth trying — in Upstart’s taproom if you can make the trek to their East Boulder warehouse. But we think the Lemon Lavender CBD variety, available in bottles, is something special. The lavender aroma hits your nose first, and the lemon is abundant and almost creamy, like limoncello. The CBD is a nice bonus. Prices vary.

Baker Julia Wirichs brings American and European baked goods to Rosetta Hall with Petite Fleur. You’ll be tempted by the fluffed cinnamon and glazed doughnuts, but the smaller bites behind the display are just too interesting to pass up. We like the alfajor, a South American dulce de leche cookie. Wirichs’ version features two soft wafers sandwiching sweet, nutty filling and garnished with chopped walnuts and a chocolate drizzle. $3.