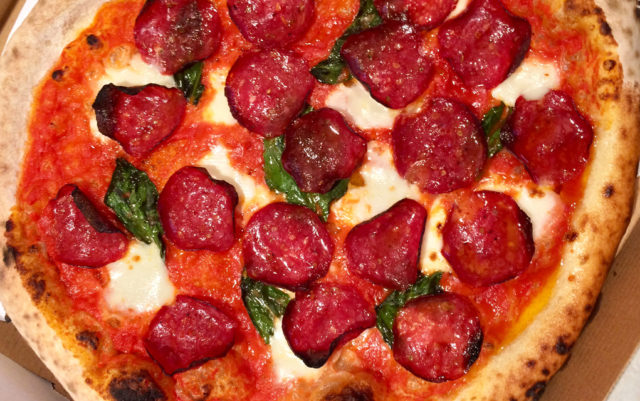 Gunbarrel’s Fringe Pizza aims to get your Neapolitan-style pie ready in minutes. They’re able to do that thanks to an uber-hot pizza oven for which they had to remove the storefront in order to fit it inside the small, order-and-go location. We’re glad they were able to figure out the logistics, because in addition to being quick, the pizza’s good. A chewy crust is well crisped from the hot oven, and the topping options range from classic to unique. We opted for the lamb pepperoni pizza — bright San Marzano tomatoes, punchy lamb pepperoni, fresh basil and creamy mozzarella. $13.

If you’re looking to indulge this week — maybe the late-May snow is getting you down — may we suggest the sweets at Louisville’s Bittersweet Cafe and Confections? In particular, may we suggest the brownie boulder field? It’s two dense, luscious, fudgy brownies stacked atop each other, sprinkled with chopped pecans and drizzled with ridiculously good caramel. $4.

Bacchanal Golden Strong Ale is unique. Our guess is you’ve never had anything like it. It’s got Cellar West’s traditional farmhouse funk but fruitiness and tartness from raspberries and a striking dryness and heat from a pinch of cinnamon. The Bacchanal is aged in oak barrels to round out and balance the texture. It’s much more drinkable than the 9.5 percent ABV might suggest. Visit the new(ish) Lafayette taproom for a bottle. Prices vary.

Sushi Yoshi has been crafting unique, fresh sushi rolls, sashimi, Osaka-style sushi and nigiri for years now. The food’s consistent and fresh, and the downtown Louisville location is welcoming and cozy. We opted for the green coral roll on a recent visit — asparagus tempura is wrapped inside a sushi roll with cream cheese, crab and mayo. It’s topped with dynamite wasabi tobbiko. $11.