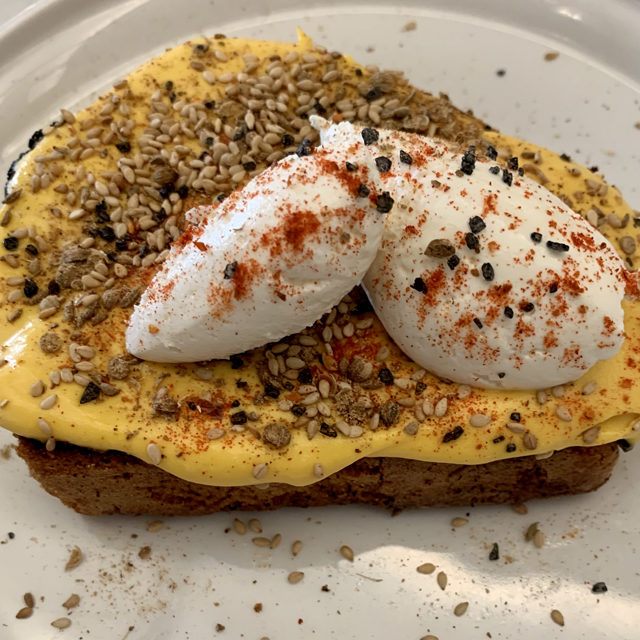 Chef Modou Jaiteh was raised in Gambia, and he credits some of the menu items he serves at Jacaranda in Rosetta Hall to watching his mother cook while growing up. But the Jacaranda menu explores not only Gambian and West African cuisine but the African diaspora in the Caribbean and American South — think Ghanaian-inspired po’ boys, Johnny cakes and peanut butter stew with Boulder lamb. We opted for eye-popping benne toast — a thick, crusty slice of sweet potato bread topped with creamy sweet potato puree and dollops of silky mascarpone. Lest the bite become too sweet, Jaiteh adds pumpkin seeds, a dusting of crunchy and earthy dukkah and bright lime zest. $9.

It’s that time of year when at least one person you know has the flu at any given time. Or, if not the flu, some sort of winter cold brought on by frigid temps and holiday travel. Which means it’s also time to give your body the most vitamins, minerals and other important nutrients you can to help boost immunity and stave off sickness. At Wonder, cold-pressed juices and shots are made from raw vegetables, fruits, nuts, seeds and herbs. The flu shot is especially potent: a ginger and lemon juice base is mixed with oregano oil and a sprinkle of cayenne pepper for the in-house variation. (The 4 oz. bottle comes with apple cider vinegar as well.) The lemon and ginger juice is incredibly refreshing, as well as a bit intense. The cayenne and oregano give the whole shot some heat as it goes down. $3 for 2 oz, $6.75 for 4 oz to go.

Fast casual chain Motomaki prepares Japanese-inspired rice and poke bowls, sushi burritos, salads and more. Build your own bowl/roll/salad from a long list of proteins, grains, veggies, sauces and fix-ins, or pick from its menu of well-composed meals. We like the mochicko bowl, an appetite-satisfying blend of chicken thighs fried in rice flour and slathered in teriyaki sauce, cucumber spears, avocado slices, slaw and spicy sprouts. $9.75.

After saturating ourselves with dark beers and winter warmers, we needed a break and so reached for The Post’s esteemed Howdy pilsner. It’s crisp and light but with a taste that brings to mind a sundrenched meadow and, in a good way, fresh hay. Howdy’s taken home several Great American Beer Festival and U.S. Open Beer Championship medals, so don’t take our word for it. Available on tap at The Post’s restaurants or in cans throughout the county. Prices vary.