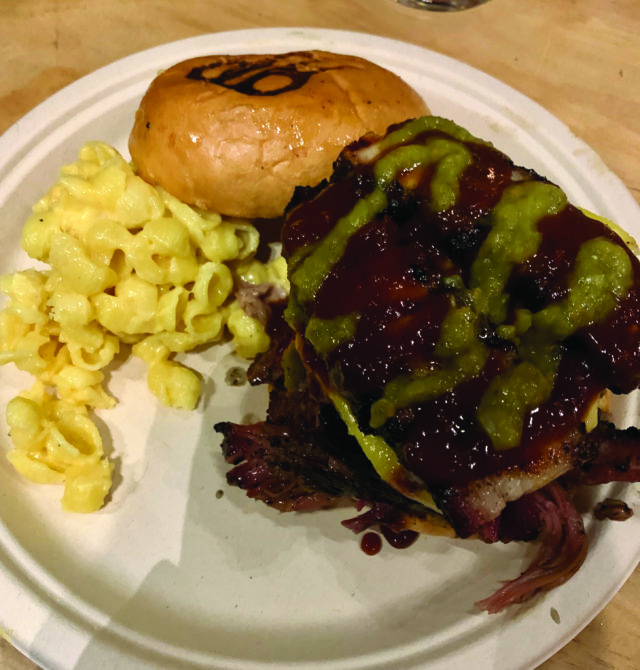 Pig and pineapple go together — glazed ham and pineapple rings, Hawaiian pizza, and now, the Pineapple Express from Rollin’ Bones. It’s a mountain of smoky, tender pulled pork piled onto a bun and topped with fresh pineapple and two slabs of pork belly. For as great as the flavor combo of savory pork and bright pineapple is, the star of the sandwich is the pork belly with a peppery, thick bark encasing deeply flavorful meat and fat that melts on the tongue. Top it with one (or two or three) of Rollin Bones’ excellent sauces, and eat it alongside mac and cheese or one of several sides. $11.

This juicy IPA from Gunbarrel Brewing Company is worth seeking out. It’s imbued with tropical fruit flavor — you might pick out lychee or pineapple — and is remarkably smooth-drinking. That fruit is balanced by 64 IBU, culminating in a brew that hits all the right notes. Prices vary.

Oh, the pleasures of a Chinese lunch special: cup of soup, crispy eggroll, plate of food and you’re out the door for less than $10. Tsing Tao has lunch plates in spades, but their Szechuan Eggplant is a highlight. The eggplant is tenderly sautéed and accompanied by al dente bell peppers, broccoli, carrots and celery, all sluiced in Szechuan sauce — sweet up front with a dull roar of pepper on the back — served next to a soft and pillow-y mound of steamed or fried rice. And if the Szechuan isn’t enough to open up those sinuses, dunk that eggroll in a dollop of their house mustard. $8.75.

Balance is the name of the game for Hanuman’s Ayurvedic chai. The Boulder-based company produces a lineup of bottled chai with various milks, as well as dried tea and karha, a turmeric- and cardamom-based herbal beverage. But we like the equilibrium Hanuman has struck in its base chai blend — cardamom and cinnamon upfront, with a tastefully apportioned hit of ginger at the end. Prices vary.