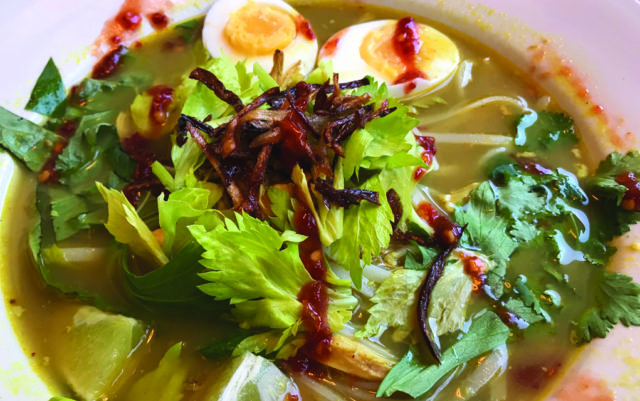 Finally… soup weather. All that snow really put us in the mood for a steaming bowl of comfort, which we recently found on the daily specials menu at Southern Sun. Thor’s Soto Ayam is the Sun’s take on this Indonesian chicken noodle soup. Tender shredded chicken bathes in a light and bright broth that leads with ginger, turmeric, lemongrass and kaffir lime, but finishes with the earthy nuttiness of cumin and coriander. Fat rice noodles replace the traditional glass noodles, providing a springy foil to the delicate texture of basil, cilantro and celery leaves. A soft-boiled egg adds rich umami, while a drizzle of sambal gives appropriate heat. You’ll be feeling as strong as a Norse god in two slurps. Please head over and demand this on the specials menu once a month for the rest of winter. $11.95.

Mudrock’s is the quintessential sports bar and grill. It has dozens of local and regional beers on tap, plenty of  TVs, bar games like pool and trivia, and a menu loaded with fresh takes on pub grub staples. The burger lineup takes up one side of the menu, so we gravitated there and sampled the Colorado burger. It’s at least a half-pound of beef topped with Anaheim peppers, bacon, pico de gallo, pepper jack cheese, chipotle mayo and a sweet and smoky barbecue sauce. Served alongside your choice of several sides, it’s a no-frills, wholly satisfying meal. $13.99.

Precision Pours makes an exceptional cup of coffee. Choose from one of the shop’s daily brews, culled from craft roasters around the globe, and the highly skilled baristas will extract every bit of flavor and texture out of your beans of choice. We opted for a nutty, earthy Evans Brothers Coffee (out of Idaho) roast that was prepared via pourover — hot water poured over the fresh grounds and filtered slowly to maximize contact between the two, extracting the most flavor and oils. If you want craft coffee prepared the right way, and without a whiff of pretension or a hefty price tag, Precision’s the place. $4.

Next Thanksgiving we might just forego the pumpkin pie and indulge in a gluten-free, vegan pumpkin muffin from Bittersweet Cafe & Confections in Louisville instead. We stopped by and slowly enjoyed this warm, gooey, decadent muffin with a hot cup of coffee on a recent cold day. Made with Earth Balance plant-based spread, gluten-free flour, pumpkin, raw sugar and what we suspect might be essence of cloud, you’ll have a hard time believing this muffin is either gluten-free or vegan. Rich, soft and sticky, with a lightly crunchy brown sugar crumble on top. Perfection. $4.50.

Local brews (and one cider) for the holiday season