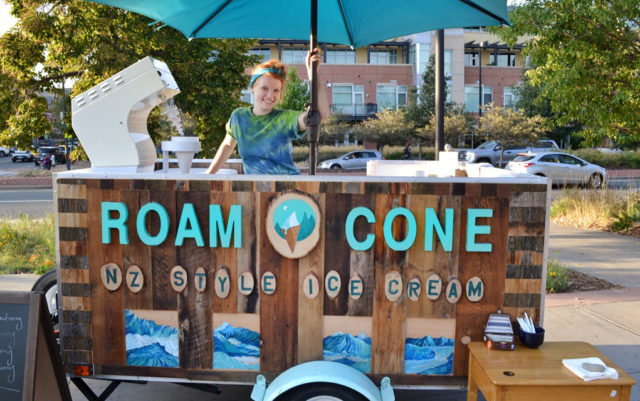 Two torn labrums in my hips,” says Emily Morris of the injury that led her to create a mobile ice cream operation. She’d just returned from a yearlong trip to New Zealand, where she fell in love with the Kiwi take on ice cream, and her entrepreneurial drive was locked in fifth gear while she rehabilitated.

“Getting injured … led me to having more time to delve into that idea of owning my own business,” Morris says. “I called the City of Boulder to see what it would be like to get a permit to make this ice cream business a reality, not really serious about it, but it turns out there was an opportunity.”

And so Morris took the plunge in April this year. She used a degree in architecture to build a cart, used a background in freelance graphic design to develop a brand, and bought a unique machine that makes New Zealand-style ice cream. “It takes the idea of combining power tools with ice cream to make it even better,” she says.

“It is a machine that they’ve been using in New Zealand for the past 30 years, and it basically has a drill bit on it, like an augur, and so you end up putting vanilla ice cream and frozen fruit into a funnel and then the drill blends it into a completely smooth soft serve,” Morris says. “It creates a really unique texture. It kind of whips it.” 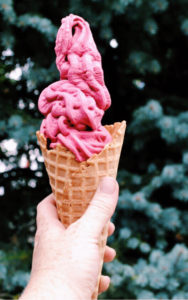 If you’ve never heard of New Zealand-style ice cream, you’re not alone; people from the island nation have been fooled by the moniker, too.

“The second day I was in business I had a New Zealander say that she heard a rumor about Kiwis and ice cream and (when she tried the Roam Cone ice cream) she said, ‘I thought this was regular ice cream, I didn’t know it was special. Now that I think about it, I’ve never seen it in this country.’ She got really excited that she got to experience something from her childhood,” Morris says.

The drilling whips the ice cream and fruit mixture into a fluffy, almost mousse-like texture, and the heaping doses of water and fruit help to keep it light like sorbet. So far, Morris has been making products with commonly frozen fruit — berries, cherries, mangos, pineapples, etc. People can mix and match, and she often recommends adding in fresh banana for its texture and sweetness.

Morris says she’s been playing with the idea of freezing her own fruit to expand flavor options, a list that already extends past what she had in New Zealand. Procuring fruit from local farmers markets is on the top of her to-do list.

Launching a food truck business is not easy work, even though it’s — in theory — one of the more common ways for food professionals to own their first businesses. The realities of building a business, and a truck from scratch, presented immediate issues for Morris.

“I kind of got to combine my skills of architecture and marketing and design and ice cream, but, you know, just because I have a degree in architecture doesn’t mean I have construction experience; the cart was much more complicated than I had intended,” Morris says.

Opening day (just a few weeks ago) included a situation where her freezer stopped working, which is generally bad for ice cream businesses. She ripped her extension cord in half driving away when she forgot to unplug it. And she also learned the hard way that, in building the truck, design is different than execution.

“On the way to (the opening site), my tire started smoking on the road because it was rubbing up against the wood part of the trailer,” Morris says. “But I did get open. Nothing too horrible as far as opening a business goes.”

In fact, Morris says despite the initial frustration, it was the process of opening a business and scratching that entrepreneurial itch that she found she loved. As it turns out, ice cream is her first step in tackling much larger goals.

“I think the biggest reason I wanted to do this is not necessarily because my dream is to own an ice cream trailer specifically, but my dream is to never stop learning and growing,” Morris says. “I purposely put myself in these situations just to see what I’d learn from it, and I know I’m sort of intentionally bringing myself to change my life path. I know doing that I’ll end up meeting a lot of people I otherwise wouldn’t have ever met.”

Because ice cream (and food trucks in general) can be seasonal in Colorado, Morris says she’ll be using the winter and her experience this summer to address a bigger idea — a fund that would help entrepreneurs like herself attend shorter-term educational opportunities like trade classes, apprenticeships, boot camps, etc. It’s a work-around, she says, to the current educational system, which prevents people from getting the knowledge necessary to pursue their dreams of creation.

“I have so many friends personally who are in the 20s age bracket, where they got their degree and they’re kind of lost still,” she says. “You don’t need to go to grad school and take out more loans to figure out the next step. If they had the same opportunity to take a couple months, financially and pressure free, learning a bunch of skills, they would all be much more [productive].”

Morris says she would’ve benefited from a financial program like that, but bootstrapping Roam Cone herself has so far been a success, entrepreneurially and in the culinary sphere. Where next she’ll roam, and when, is to be determined — a freedom she’s glad to keep alive via a mobile operation.

“We’ll start with ice cream and see what comes of it.”

Find Morris and Roam Cone at 11th and Canyon or 1056 Boulder Canyon Drive, depending on the day. Check roamcone.com for more details.