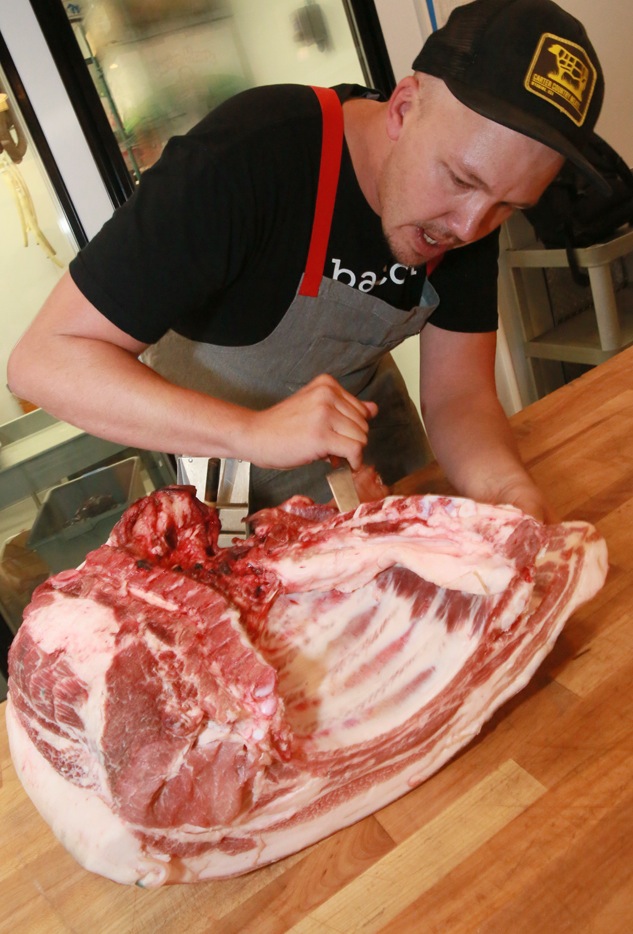 Blackbelly Butcher Shop chef Mike Fortin and butcher Nate Singer are in the middle of a “primal dinner.” Singer, who just broke down the ribs of a locally raised lamb in front of a small crowd of diners, cracks open a Gennessee Light and shows off the wide variety of meats curing in a walk-in refrigerator — ‘nduja, bacon, lardo and more. There’s a bin labeled “dog meat,” and I ask if that’s a cutesy name for some future sausage or goulash mix, but no, it’s just going to be really good dog food.

Fortin, meanwhile, works in a small kitchen with three cooks preparing a four-course meal from the lamb Singer broke down. He already sent out the first course: a barbecue lamb slider on a sweet potato roll with celery root slaw. Now, Fortin assembles the second course — grilled lamb loin, cubed and arranged with melon chunks, lamb salami, tahini and lemon labneh — on 50 plates stretched out across the workspace.

The entire kitchen staff comes together to serve the food, and Fortin gives a little speech about the dish. Singer talked earlier about where the lamb came from, the rancher who raised it, and how he likes the flavor from older lamb, mutton technically.

The whole presentation, taking place beside Blackbelly’s main restaurant (the butcher shop and restaurant are separate, although under the same umbrella), is designed to bring the virtues of sustainability directly to consumers on their plate. It’s a cause Fortin and Singer are passionate about.

“The utilization of your community butcher has been lost, you know, in the communities today that we all live in,” Singer says. “It’s just like your barber, dude. Same deal — people are going to Walmart to get their hair cut and buying their meat in the same damn store. It’s terrible, you know?”

At 30, Singer is ambitious and confident. He grew up working at his family’s steakhouse, eventually perfecting a hybrid style of butchery that leans more toward whole-animal European-style butchery as opposed to the U.S.-Department-of-Agriculture style that blocks out cuts like the boxy borders of Western states.

The biggest knock on what Singer and Fortin preach might be price. People shop at Walmart, or buy discount meat, for a reason. That’s one reason why the butcher shop uses cuts of meat that have lost some prestige, or else never had any prestige to begin with. It reduces some of that cost barrier to entry. The other eason is that while the restaurant next door, run by Top Chef Hosea Rosenberg, will take the pricey cuts like the New York strip and filet, the butcher shop is tasked with utilizing, and selling, the remainder of the animal. The monthly primal dinners are intended to teach guests how to use the butcher shop as a resource, and “introduce people to new sections of that primal of the animal that they’re not normally familiar with,” Fortin says.

Goat meat provides a good example of what Fortin and Singer are talking about. Singer says raising goats makes farms sustainable, as the animals act as weed killers and rototillers, allowing ranchers to grow grass for the much more resource-dependent lambs. Though goat meat is one of the most commonly eaten meats in the world, it hasn’t cracked through in the U.S.

So Singer will order goats from his lamb supplier in order to help that farm be sustainable. That goat will be picked for prime cuts by the main restaurant, and the butcher shop will end up with the shoulders or ribs. From there, it can end up in a variety of dishes, but recently Fortin braised it with simple spices and threw it on a sandwich alongside preserved lemon chèvre and olive tapenade.

Fortin says exercises like that “brings me to older books and books from more old school chefs that had more traditional methods that were more technique-based and utilized the entire animal.” Fortin, a recent transplant from New Hampshire, is soft-spoken, and his method poses a counterpoint to Singer’s energy.

Singer apprenticed under several top charcuterie producers, and has turned that knowledge into a wide-ranging program that includes custom sausage-making. Curing allows him to use the random cuts of meat the shop gets. A charcoal ham terrine, for instance, was built from pork parts, dried horseradish and charcoal spice (derived from coconut husks), and creates a beautiful black slice with specks of white fat and pink ham. The aesthetics of the final product matter, Singer says.

“You can’t put a pig in a case and expect it to sell, it has to be appealing to people, you know, especially when it’s a lesser cut of an animal,” he says.

Singer believes that people support the things on which they spend money. Even if they might not get a primo cut or as much quantity as they would at a chain grocer, they’re getting exceptional quality at a local butcher shop for the price.

“We don’t just make up prices out of our ass and put them on a piece of meat,” he says. “The price is made off a farmer that’s being sustainable so he can keep doing it year after year in the community. We make our price to be sustainable as a butcher shop in the community year after year, and the community itself has to come in and support that, get behind that and understand you’re not going to be eating an 18-ounce rib-eye everyday. It’s higher quality, less quantity of meat.”

There are those who will argue that any consumption of animal meat isn’t really sustainable, unless the per-person average consumption is cut back to something that’s never going to happen in America; like, once a week. Animals, particularly cows and lamb, require tons of natural resources, so it’s worth asking if raising animals for meat in today’s America can really be sustainable.

“That’s the ranchers’ job, man,” Singer says. “It’s their job to be sustainable and charge a price for their animals that’s sustainable, … and not deplete the land and actually build the land. … We only work with ranchers that are sustainable and biodynamic.”

Singer, at least, believes every entity along the chain of consumers must be responsible for maintaining sustainability. That shared responsibility creates a co-dependent cycle. But consumer tastes need to change, he says.

“I know in the last 15 years, the sale of rib-eyes and New Yorks and tenderloins and all that has gone up like 5, 6 percent, whereas the consumption for the chuck and the lesser parts of the body have gone down like 25 percent because nobody is cooking at home anymore,” Singer says. “Everybody’s going to restaurants, and restaurants are cooking middles. When people do cook nowadays, they’re in a hurry, so they’re not making stews, they’re not making braises, they’re not feeding their families like they used to, therefore the utilization of whole animals isn’t what it used to be in America.”

Buying into the system requires trust, Fortin says. Running primal dinners and rotating new cuts of meat in front of people builds trust. Once a relationship is established, though, it’s off to the races, Fortin says.

“People just go for it,” he says. “They understand, in a way, what we’re doing, that we’re trying to utilize everything. It’s like you can eat everything. We’re trying to show them how they can do that, and not to be afraid of it in a restaurant, how to shop for it here and also how to utilize it at home with simple cooking methods and such.”

How much each guest at the primal dinner took away from the butchery demonstration and dinner is anyone’s guess — but they definitely left knowing they have a resource in Blackbelly. It’s up to them if they want to use it.

For more of our conversation with Singer and Fortin, click the link below.