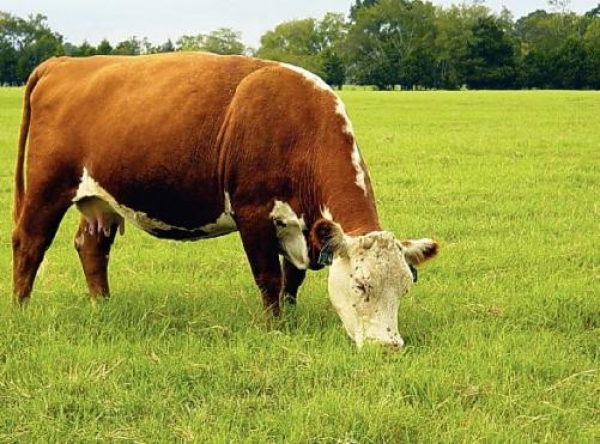 For decades, beef that is packaged and shipped to grocery stores nationwide has had a firm foundation in feedlots, where cows are fattened on a grain-heavy diet.

In an age where people are becoming increasingly interested in the origins of their food, however, there has been a growing trend toward eating beef that has not been raised on a diet of grain.

Tom Lasater, general manager of the burgeoning grass-fed beef company Our Pastures, says the grass-fed concept was relatively unfamiliar even 10 or 15 years ago.

Before the late 1940s, all cattle had been primarily raised on grass. It wasn’t until the 1950s that grain began to appear on the menu.

Lasater’s company, started by four ranching families throughout the United States — including his own — seeks to provide a product that has been raised naturally, with 100 percent grass-fed cattle and absolutely no use of pesticides or antibiotics.

With Our Pastures beef, Lasater says that consumers will get what they imagine when they read the label. They will understand more about the origin of their meal.

“You can go buy cattle anywhere, but you might not know how they’ve been raised,” Lasater says.

Our Pastures looks for prospective cattle sources that are interested in taking care of the land, and other animals that live on the land, he says. Pesticides kill a lot of good grass, which in turn can be detrimental to the local ecosystem.

Lasater says that it is often difficult to find providers that are willing to commit to all of his company’s standards.

“It’s always a struggle to find people who don’t think it’s crazy to not do what they’ve always done,” he says.

Because grass-fed cattle tend to be raised on open pastures where they are able to walk around and graze freely, Lasater says that they also typically translate into leaner and healthier meat.

“If you eat our beef you’ll definitely notice that it tastes different than other meat you might buy in the supermarket,” Lasater says.

The taste difference is what typically gets people curious about grass-fed versus grain-fed beef products.

Paul Gingerich, meat and seafood director for the Boulder Alfalfa’s Market due to open in April, compares the flavor contrasts of grass-fed beef to those of wine. The taste can vary depending on several factors, such as the location of the pasture and the time of year.

“You have these ebbs and flows in terms of tenderness, and particularly flavor, as the grass changes,” Gingerich says. “The one thing people still need to accept about grass-fed is that it’s not the same every time — it changes seasonally.”

Grain-fed beef, Gingerich says, provides a more stable flavor profile that people have been conditioned over decades to enjoy. This meat tends to be more tender — with a greater amount of fat — and is a bit more tolerant of high cooking temperatures.

While he still enjoys sinking his teeth into a good grain-fed steak, Gingerich says that he has also come to appreciate the rich flavor of grassfed beef.

Steve Redzikowski, owner and chef at Boulder’s Oak at Fourteenth, has been cooking for about 15 years. Originally from New York, Redzikowski says he never worked with grass-fed beef until he came to Colorado, where the product is a bit more accessible. Currently he uses Our Pastures grass-fed brisket in the recipe for Oak’s homemade pastrami, and grass-fed ground beef for one of the restaurant’s meatball dishes.

Redzikowski has found that it is important to educate his customers about the nuances of dishes made with grass-fed beef. Once informed, he says, guests are generally more receptive to the product.

Gingerich also says that consumers will need to have some knowledge about the difference between grass-fed and grain-fed beef before they can appreciate both for what they are. Many people may not know what to expect when they veer away from the meat they are used to eating.

While some may not be ready to make the transition, Gingerich says that he does expect Boulder to embrace the alternative beef.

“If there’s a community ready and educated, it’s Boulder for sure,” Gingerich says.