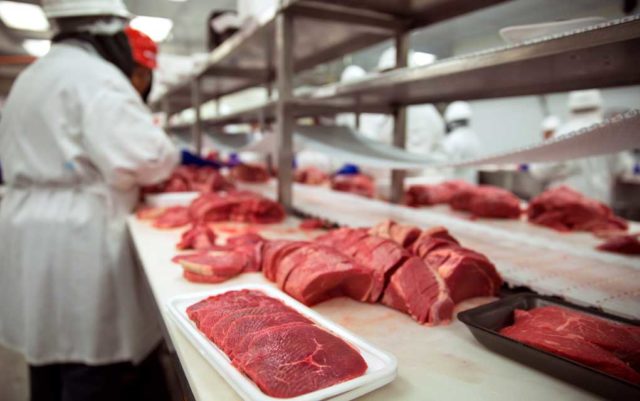 Six employees of the JBS meat processing plant in Greeley have died of COVID-19. Around the country, meatpacking and food processing plants have become hotbeds for the spread of the coronavirus due to the close proximity in which employees work and some say, inadequate safety and testing protocols.

Outbreaks of COVID-19 and subsequent facility closures — including a 10-day closure of the Greeley plant — underscore issues of inequity in the meat-processing industry, where critics say workers have few rights and high risks.

“This is a human rights issue and some people think that workers have a choice to just quit,” says Kim Cordova, president of the United Food and Commercial Workers (UFCW) local union group, Local 7. “But you can’t. You invested yourself in these companies, and companies have an obligation to protect their workers and look out for their well-being. In the packing house… there’s not many people lining up to do that job.”

Cordova says between 800 and 1,000 workers had been calling in sick at the JBS facility over the last three and a half months. At the time, Cordova alleges, JBS was not following social distancing guidelines, providing adequate personal protective equipment or offering wholesale testing of employees. In fact, Weld County health officials (in a document obtained by Colorado Public Radio) warned the plant of a perception among workers of a “work while sick” culture that encouraged people to come to the plant regardless of their health concerns.

“The company is putting pressure on their workers to come in,” Cordova says.

JBS Head of Corporate Affairs Cameron Bruett says, after the plant’s reopening, the company is screening all employees but testing only those that present symptoms.

Bruett says “shutting down the facility was the most effective way to contribute to public health,” adding that “testing does not stop the virus and only provides a one-time snapshot of infection.”

Current sick-leave policies are adequate enough, Bruett says, to ensure that employees stay home when they or loved ones are sick.

“We want team members to stay home when they’re sick, and our benefits support that position,” Bruett says. “In Colorado, our team members receive 100% pay for the first four days they are out with illness and then receive negotiated short-term disability for up to 26 additional weeks. No one is forced to come to work and no one is punished for being absent for health reasons. If someone is sick or lives with someone who is sick, we send them home.”

Of course, federal guidelines indicate anyone who has COVID-19 to self-quarantine for two weeks.

Bruett says the company ordered masks in March and, after a delay in receiving them, started mandating their use on April 13. JBS is also temperature testing all employees before they enter the facility and removing at-risk employees with full pay.

Cordova alleges that, despite those claims, many JBS employees don’t feel empowered to use whatever sick leave they have.

“It’s not just [personal protective equipment], it’s not just the mechanical parts in the plant that they can put some plastic shields on and mitigate. It’s actual policies and a lack of transparency,” Cordova says. “A lot of the big issues is these workers do not have [adequate] paid sick leave and they don’t have paid family leave, so it creates a culture of work while sick.”

Cordova claims JBS’s slow implementation of safety measures is part and parcel of federal guidance — there is little in the way of guidance for facilities during the pandemic from the Occupational Safety and Health Administration (OSHA) and the federal government’s stunted reaction exacerbated outbreaks like the ones at several meatpacking plants in the U.S.

“Originally our president said this was a hoax and a joke, and I think that had a lot to do with the late response from our employers,” Cordova says. “Now that this is real, we have to hope companies will react faster, and we need stingier OSHA guidance and guidelines.”

Too, Cordova says, meatpacking facilities need to properly communicate safety and sick leave guidelines to a community largely comprised of first-generation Americans, who speak multiple languages — 30, alone, in the Greeley plant. Bruett did not respond specifically to a question about whether guidelines are posted in all 30 languages.

“A lot of these workers are refugees,” Cordova says. “They want a piece of the American dream. They came from a government they didn’t trust and then they come over here and someone gives them a job when they can’t read or write. A lot of these workers are very educated. Some were doctors, school teachers, but the companies take advantage of that and really put them in these positions where they feel compelled to work.”

Cordova has been making all these concerns public through press releases and public comments. In response, JBS sent a cease and desist letter on April 24 claiming the Local 7 was “subverting and otherwise violating express provisions of” the collective bargaining agreement by encouraging employees to withhold production.

Cordova says it was galling to receive the letter the day the plant reopened and that it mischaracterized the comments Local 7 has been making public.

“They’re trying to imply because we’re raising safety issues that we’re encouraging a work stoppage, and we can’t do that under the contract, but that doesn’t mean workers can’t make their own individual decisions to call in sick or miss work because they’re concerned about their safety or they take care of loved ones.”

Bruett did hint at sentiments expressed by Tyson Foods this week that the coronavirus is imperiling the food supply chain in the U.S. — “We will endeavor to keep our facilities open to help feed the nation, but we will not operate a facility if we do not believe it is safe.” He added that relatively high infection numbers in Weld County (1,469 confirmed COVID-19 cases) create a sense of worry in the community that impacts their operations.

“When the virus is prevalent in the community, fear is heightened, absenteeism rises and the challenge of keeping the virus out becomes greater. If absenteeism levels become too high, we cannot safely operate,” Bruett says.

But, Cordova retorts, “If you’re worried these packing houses are trying to open too fast, they themselves are responsible for breaking that food supply chain because they have not been proactive, or they’re rushing to open to start a cycle of open-close, open-close.”

UFCW has no members inside the Smuckers plant in Longmont that opened last year, by the way, but Frank Cirillo with the company says it is offering 14 days of paid sick leave for employees who test positive and a one-time $1,500 hardship grant. The facility has been able to remain open during the pandemic.

The Local 7 also represents grocery store workers, and Cordova says she’s concerned about the numbers of infected employees rising. She also cautions people to be mindful of grocery store employees, who come in contact with hundreds of people a day.

“We’ve had customers get very violent with our members because they’re out of tissue paper. We had one worker punched in the face because the store was out of Himalayan salt for goodness sake,” Cordova says. “If they’re stocking produce and someone walks right up to your face because they want to know where the Granny Smith apples are, it compromises those workers. They’re not wearing gloves in the store. We want screening and testing.”