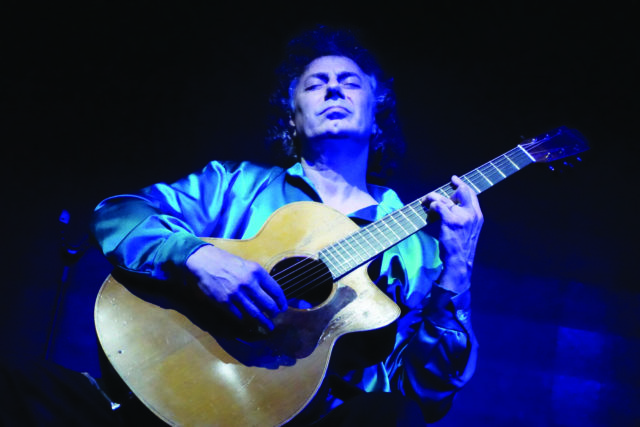 The story goes that when the late Michael Hedges was killing time in Key West—well before he’d achieve fame as a groundbreaking acoustic fingerstyle guitar player and one of the rising stars of Windham Hill records back in the 1980s—he’d spend afternoons listening to Pierre Bensusan on cassette, and from those afternoons penned his own tune “Bensusan,” one of the standout tracks from his debut album Aerial Boundaries (1984). (The two guitarists eventually met some years later and played a handful of shows together.)

That Bensusan’s music, a fiendishly genre-defying alchemy of English folk, Celtic, jazz and resonances of his French-Algerian early childhood, should find its way into the DNA of the contemporary oeuvre of acoustic players is both fitting and slightly awkward. Hedges’ reference to him by name undoubtedly brought some recognition beyond the acoustic guitar cognoscenti, but Bensusan’s music in some ways has always revealed and celebrated a richer musical heritage, a palette of harmonies that drift across his compositions, murmuring and teasing, before dissolving and giving way to fresh musical gestures.

As so many contemporary fingerstyle players reference Hedges as an influence—primary, or secondary—we asked Bensusan, who is on a lengthy, pandemic-delayed tour of the U.S., whether he hears himself in any of the young players on the scene today. His answer surprised us.

“But on a different level, my take is this: an instrument is an access to music… Music is a form that, if it is music, can be played on any instrument. If any music needs a specific instrument, I start to be suspicious.”

Bensusan strikes a poised and deeply philosophical view toward his own compositions. His latest album, Azwan, was completed in early 2020, and he promptly took it out on the road before COVID shut down venues and the live music world came to a halt. Two years later, he’s picking up live performance where he left off. We asked whether the tunes—like “Balkangeles,” with its jazzy chordal motifs giving way to an intricately harmonized melody, or the bass-note supported fretboard panorama of “Wee Dander”—evolved and changed while Bensusan was off the road.

While Bensusan approaches his highly technical multi-voiced playing with élan and disarming ease, even he admits that the pieces can be a challenge, and as any guitarist who makes their living from performing would honestly concede, music that challenges the player offers the greatest rewards, but demands preparation, rehearsal and confidence.

Even well into a 40-year career, Bensusan still confronts these demands.

“Two years ago, my new album was under-rehearsed. (It’s more rehearsed now.) But as professional musicians, we make a record and go out on the road sometimes before the music is ready. Those are the considerations we have to make, but they can be totally alien to the music itself. That’s the reality of what we do, so we also have to deal with that.”

But he draws a distinction between confidence and ego, the latter of which can represent a subversive trap for the musician rising up to meet his material honestly.

“I… don’t mind sharing insights with [the audience], but not so much where I become ‘in the way.’ … When the player starts attracting attention to him, it’s taking away from the music.”

The difference between a dialogue and a monologue?

“It’s not a monologue. From the moment that someone is listening, they are making what he hears his own. When I play alone, as a solo performer, I am not at all solo. I’m with the music. Two of us. The music is independent of me, and I am independent of the music. We communicate together, and we decide we are going to go for a ride… together.”

And as Bensusan and his beguiling compositions take their ride, leaving room for listeners and admirers and the begraced, his vehicle is what is affectionately known as “the Old Lady,” his 1978 Lowden guitar. His constant companion, practice instrument, compositional instrument, performing instrument.

We’ve heard too many horror stories of beloved instruments damaged or purloined in the travels of touring musicians not to ask: Isn’t Bensusan a little… nervous about bringing his cherished Lowden across continents?

Traveling? A lot of traveling?

“This is the instrument I bring the music with. This is my home, this is my life. When I play it, I feel the continuity of my life.

“I have another Lowden—a great guitar, but it’s a guitar…. This is my life. It’s almost 50 years old, still in great shape, I take very good care of it. But it has the wrinkles of life. You can tell this guitar has a story to tell.

On the bill: Pierre Bensusan.