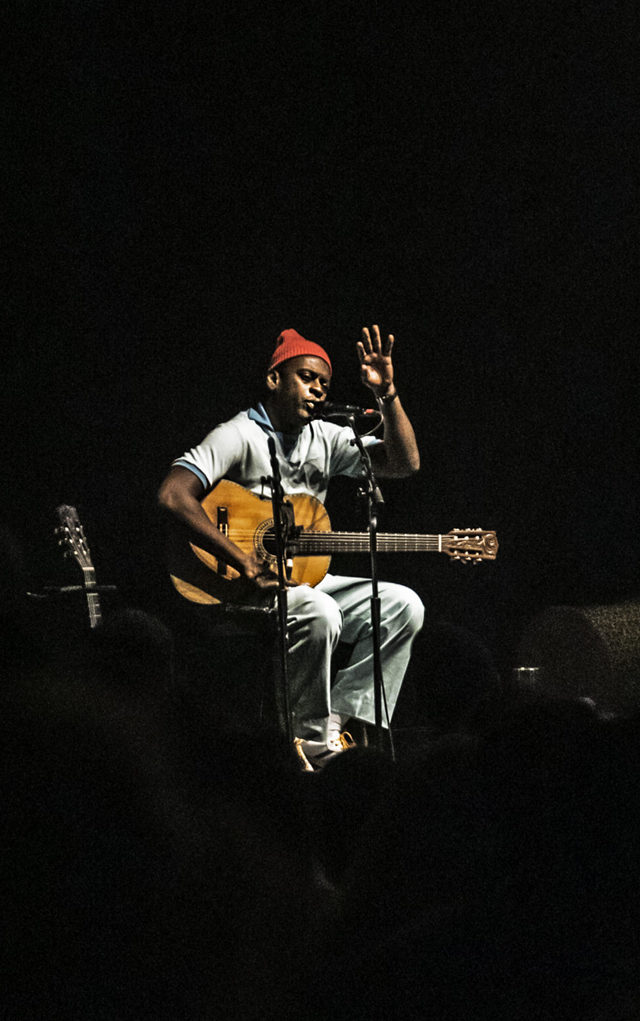 When David Bowie died, Seu Jorge found himself in a unique position to pay tribute, even though he hardly knew the man and his relationship with Bowie’s music was seemingly accidental.

It began with an invitation from Wes Anderson to cover several of Bowie’s songs for the 2004 movie The Life Aquatic with Steve Zissou; he did so with a simple reverence, sweetly, as if his renditions were always in tribute to the man who made them.

Jorge is now on his second international tour playing his versions of Bowie’s songs, and the relationship between the two men seems anything but accidental. Jorge’s translation of the songs into Brazilian rhythms and Portuguese words carries the thread of vulnerability that always made Bowie dangerous and true.

In his softened interpretations, Jorge guides us away from the chaos of rock and the annals of Western intellect, suggesting we trade in the struggles of thought for the struggles of life. To pull this off, he needn’t depend on his skill or talent, but on his ability to yield. Jorge and his music embody the concept of generous art — a creative offering freed of the heavy hands of ego and reason in favor of a darker beauty that, if true, is also haunting.

While there’s no shortage of anguished music in the Western European canon, there is a certain hesitation in allowing them to ring the bells of the heart’s interminable loneliness. We leave it to youth countercultures to truly listen and embrace the torment in our saddest songs. But to hear Bowie through Jorge’s native tongue makes a teenager of us all. He is a master of saudade, a word only the Portuguese language was compelled to draw into existence.

The word comes from the post-classical Latin word solitatem, “solitude,” but is influenced by the Portuguese word sardar, “to salute.” The resulting word is a signification of our most refined, tender and ardent desires for something or someone that is absent and so it is accompanied with an anxious regard. If a person says “tenho saudades,” it is understood to mean, “I am under the most delicate anguish for the absence of my love; or from being absent from my home.”

It was easy, for example, to love the glitter of Bowie in the 1970s when his genius seemed free, like a countercultural triumph. But underneath the shiny veneer of his poppy tunes hid darker thematics — a wild and wide open embrace of earthly melancholies.

Looking back at the fallen star, it’s impossible to separate saudade from his music, but 15 years before Bowie’s bodily departure, critics were lining up to attend his metaphorical musical funeral. After the 1980 release of Scary Monsters, an album devoid of the frenetic energy of glam rock, critics and audiences alike struggled to embrace his newly naked emotional depths.

In 2002, he released Heathen, a slow burning album that by name and substance was an anthem of a rockstar who still didn’t feel like he belonged because he lived in a world that was like a religion, always demanding something in return for their audience, be it the virtue of cool or the virtue of the God. But for Bowie, even if paradise did exist, it was never the goal. Reality was.

The opening track to the album, “Sunday,” is a hymnal, a giant crescendo of Bowie’s pastoral voice lifted by the boyish chimes of a choir and grounded in the low spectrum sounds of Gregorian chant. The song triumphs in its final measures, breaking to a brief and sincere moment of glam rock, an unconstructed surge rising organically from the soles of Bowie’s feet. All he needs to do is all he does, opening his mouth to proclaim: “All my trials, Lord/ Will be remembered/ Wverything has changed.”

Meanwhile, in 2002, 32 year-old Jorge issued his first international release, Carolina, a rousing samba funk album. Modern and bright in its production, it also seamlessly harkens back to the traditional sounds of 1970s samba funk. Its beats are repetitive and fast-paced but the various declaratory verses seem to slow the songs, or at least quicken the mind enough to make the music seem slow.

The first song and title track, “Carolina,” is a love song about a woman Jorge just can’t shake the idea of. It’s a fun, danceable tune, but one that rests not on the joys of love, but on its desperations, peppered as it is with lines that say “I need you,” “I must tell you I love you,” “I’m feeling lonely.”

Here, love is not issued as a proclamation or an aspiration, but as an excruciating expression of saudade, the inescapable loneliness of this human life and of the inevitable and wistful nostalgia for a companionship we cannot ever know.