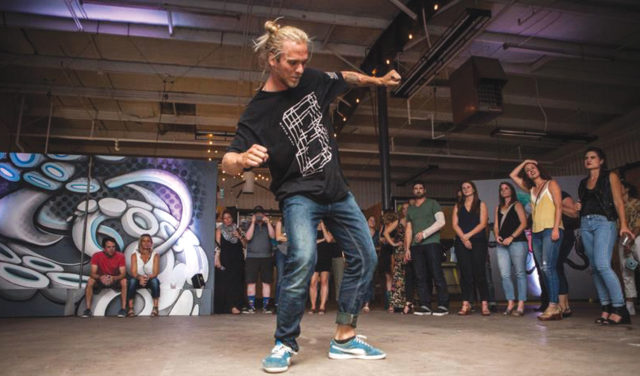 It’s hard to believe that anything is capable of expanding in the ice-water bath that is 2020, but the team at Block 1750 is used to a good challenge.

The hip-hop and breaking-focused dance community center’s recent expansion — an added 1,400 square feet of dance space to complement the original 1,800-square-foot studio in Boulder — has actually been six years in the making.

In 2014, when Alex Milewski and three friends managed to put in a successful offer on the space at Crossroads East Shopping Center that would become “the Block,” the idea was to create a space where dancers could meet, practice and even live — just like in the movie You Got Served.

If you missed the film when it came out in 2004, here’s a recap: A talented crew of street dancers (b-boys, to be exact) from inner city Los Angeles are challenged by a rich kid from Orange County to compete against his crew for $5,000. The LA crew lives and practices together in a warehouse, overcoming personal tragedy and interpersonal tensions in order to rise to the occasion (which, of course, they do).

Things weren’t quite so Hollywood dramatic for the crew of Block 1750, but Milewski and his friends did have obstacles to overcome: remodeling the space on a shoestring budget (almost all of which they did themselves, taught, as is the way these days, by YouTube videos); and juggling other jobs as they built out programming at the studio.

“[A few of us] did live here for awhile because we couldn’t pay the rent with the dance classes we were doing,” Milewski says, seated on a curb outside the Block on an abnormally hot November day.

The idea was never to run a dance studio per se, Milewski says.

“We just wanted to [create] a space where people could come and build their community, you know, gain some ideas,” he says. “So we kind of ran it as a side project for six years. My main source of income was from teaching at a bunch of different places and doing web consulting and odd job projects here and there — everything from Task Rabbit to running movement retreats in Mexico — but never getting paid as an admin member here,” he says, nodding toward the Block. “No one ever really got paid as an admin member here.”

It was a passion project, a labor of love. But love can only get you so far.

About three months ago, Milewski hit the biggest obstacle he’d faced yet: “The last of the original four [founders] was like, ‘I can’t do this anymore.’”

Mid-pandemic, Milewski found himself alone at a fork in his professional road.

“I thought, I have a choice,” he says. “I either have to go in on this full-time, or we have to graciously die.”

After six years of community-building, with more than 6,000 students taught over the course of more than 4,000 classes, Milewski wasn’t ready to let the Block die.

On the curb outside the Block on this apocalyptically hot fall day, Milewski waves and greets folks as they meander into the studio space for private practice or to lead classes. Evenings — typically 9-11 p.m. —  are open to community members.

As one pair of dancers leaves the studio, they ask Milewski if they should lock up, but Milewski waves them on; there’ll be more folks coming soon. Longtime patrons of the Block are often offered access to the studio’s drop box where they can get and leave keys. Milewski says Block 1750 was built around that kind of trust — literally.

The Block’s annual Block Party — a multi-day celebration of breaking and contemporary dance — has drawn the attention of dancers from around the world.

“So I was confident we could [raise funds to expand],” Milewski says.

Though there was some fear and skepticism, everyone who regularly calls the Block home lent a hand when Milewski undertook an expansion project when the unit next to the Block’s original space opened up this summer. The second unit offers an extra 1,400 feet of dance space that can keep eager kids off waiting lists and allow for lower-capacity classes during the pandemic. Dozens of dancers and teachers at the Block (Milewski estimates around 50 people all together) dedicated hundreds of combined hours to renovating the new space themselves, eventually opening a Kickstarter campaign to help them raise the $20,000 it would take to install sprung hardwood floors (perfect for dance training), body-length mirrors, and padded practice space for tumbling and acro dance.

There was only a month between launching the Kickstarter campaign in the middle of October to opening the second studio space during the second week of November. And the community was ready and waiting.

“The first Saturday that this new studio was open, we had 17 hours of combined programming,” Milewski says. “And that was just from nothing, no previous weekend programming.”

Milewski says that obvious yearning for a place to dance — evidenced by wait-lists and classes filling up two weeks in advance — is a foundational reason Block 1750 exists.

Growing up, Milewski says, breakdancers like himself are forced to practice in spaces not meant for dance: racquetball courts, gyms, college campuses, random buildings with smooth floors. Dancers are often asked to leave because of liability. And while it might be “legally understandable,” Milewski says, it’s demoralizing to developing artists:

“So being able to have a space where it’s like, ‘Come in for free whenever you want and do your thing,’ that’s so necessary.”

And it’s at the core of what hip-hop culture is about, according to CU-Boulder dance professor and Block 1750 hip-hop teacher Larry Southall.

Southall grew up in the Bronx, where hip-hop culture emerged during the ’60s and ’70s as a way to help young folks navigate a distressed borough that was intentionally forgotten by elected officials. (Former New York Senator Pat Moynihan once famously suggested “benign neglect” as a policy proposal to municipally disinvest from the Bronx.) Southall explains that hip-hop culture involves five primary elements: the DJ, the MC (a master of ceremonies, not a rapper), graffiti art (which Southall reminds had nothing to do with gang activity and everything to do with expression and making art accessible), b-boys and b-girls (break dancers) and, “most importantly,” says Southall, “knowledge of self and knowledge of the culture.”

“[Alex] has created a real community environment at the Block, and he’s invested in what hip-hop is and making sure that the students know about it — not just the dance, but the culture,” he says.

Southall teaches an intergenerational hip-hop class at the Block, where children regularly dance with parents — sometimes even grandparents.

“These battles (dance competitions) between b-boys and b-girls, they’re family-friendly,” Southall says. “You’re celebrating the dance and communing with each other and to me, that’s the best thing ever. And I feel that Alex really represents that at the Block and I’m proud to be there.”