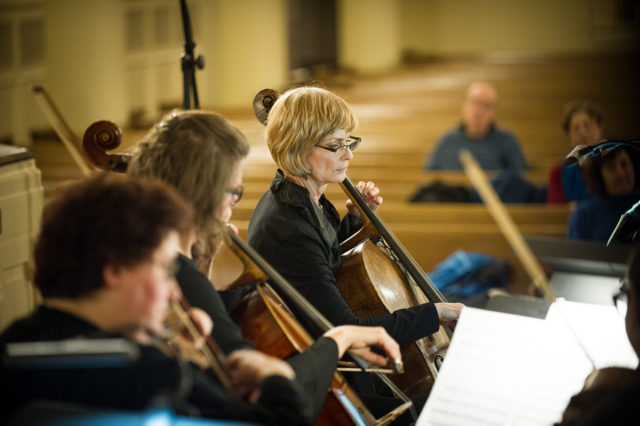 J.S. Bach’s monumental Mass in B Minor is one of the great works in the European musical tradition.

Cynthia Katsarelis, conductor of the Pro Musical Colorado Chamber Orchestra describes it as “a cathedral in both sound and spirit.” She will conduct the Mass in B Minor Friday and Saturday (Oct. 25 and 26) in Denver and Boulder. In addition to Pro Musica, the performances will feature St. Martin’s Chamber Choir, directed by Tim Kreuger, and four soloists: soprano Jennifer Bird, tenor Derek Chester, mezzo-soprano Julie Simson, and baritone Jeffery Seppala.

“It’s certainly a bucket-list piece, for both me and Tim Kreuger,” Katsarelis says. “We’ve talked about this for years, and it was time. There’s something about Bach and particularly the choral masterpieces and the B-minor Mass in particular that is so universal and so touches the spirit and the soul, and connects us to our humanity.”

Katsarelis relates that perception of the Mass to an underlying theme for the current season of three concerts: Social conscience and the human condition. The second concert (Feb. 1 and 2) is titled “Diverse Voices” and will feature music by African-American composers William Grant Still and Gabriela Frank. In March they will present “Composing Climate,” featuring Gwyneth Walker’s Earth and Sky, which has texts from Native American leaders Chief Joseph and Chief Seattle, alongside words by Henry David Thoreau.

Speaking of the Mass, Katsarelis says, “This is a time when, in our common life, we think about sanctuary — sanctuary cities and asylum seekers seeking sanctuary. The sanctuary is a physical place in a cathedral, but it has other connotations, as a place of rest for the soul, as a place to seek refuge from the storms.

“I think that the Mass in B Minor is very much like a sanctuary. You enter into it and you’re transported to a different place, a space of awe and wonder.”

The structure and composition history of the Mass in B Minor are both complicated. The final work as we know it today comprises the five main sections of the Catholic Mass — Kyrie, Gloria, Credo, Sanctus and Agnus Dei — in 27 separate movements for orchestra, choir and soloists. Bach composed the first two portions of the Mass, Kyrie and Gloria, in 1733 and presented them to the Catholic court of Saxony in Dresden.

Those two movements were used in both Catholic and Lutheran church services, but the remainder of the Mass, which Bach composed in the final years of his life as he was going blind, was exclusive to Catholic services. Some of the music was newly composed, but other movements were reworkings of music from earlier Cantatas and other works.

Bach’s reasons for completing the Catholic Mass are not known. As a Lutheran working for a Lutheran congregation, he had no obvious motivation to complete a Catholic liturgical work. Various motivations have been suggested, but none is considered definitive.

It is remarkable that a piece written over so many years with many different sources and many different musical styles would emerge as a unified work universally regarded as one of Bach’s crowning achievements. Whole books have been written on the ways Bach created a sense of unity in the Mass, but Katsarelis points to two aspects of the piece, specifically.

The first is structure: “There are the movements that contrast from the fast and exciting and the more reflective, but they all build up to a central movement, which is the crucifixion — and then coming away from that and celebrating,” she says.

The other unifying element is tempo: “Bach pulled together incredibly contrasting music that seems to have a unified pulse,” she says. “The sense of pulse is one element that can tie it together, and one that the audience can feel. They can feel the peaks and the valleys along the journey.”

One factor that deepens the impact and significance of the Mass in B Minor is how the music reinforces the theological meaning of the text, which Bach knew intimately. “One thing that brings out the theology is when Bach writes a piece that only has a couple of words, as opposed to movements that get through lots and lots of text,” Katsarelis says.

As a conductor, one thing Katsarelis contributes to the performance, she says, is a “sense of the marriage of musical architecture with spiritual architecture.”

Even more important than what she brings as conductor, however, is what the entire ensemble — players and singers and soloists — can bring.

“That synergy is really special and I love working with these people,” she says.