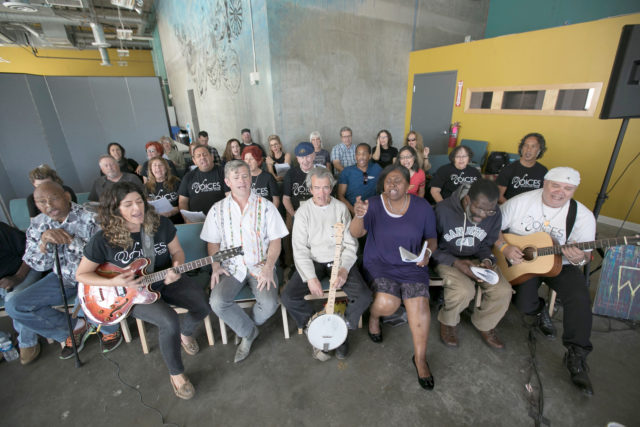 The art of filmmaking can be tedious, admits director and producer Susan Polis Schutz. Projects can take years to complete, and after finishing her seventh film in mid-2017 she was ready for a break.

But then she heard about the Voices of Our City Choir on a local news program in San Diego, and she knew she had to start filming her new documentary, The Homeless Chorus Speaks, right away.

“Their music was so moving and it was just an incredible story,” says Schutz, a longtime Boulder resident, who now spends a lot of her time in San Diego.

The documentary follows musicians Nina Deering and Steph Johnson as they recruit members for the choir by walking the streets of San Diego, asking people experiencing homelessness if they enjoy music or play an instrument. But neither is a prerequisite to join the choir. All are welcome.

The duo created the choir in 2016 in response to the growing California housing crisis. Latest estimates put San Diego’s homeless population at 9,160, the fourth largest in the nation according to a congressional report, following New York, Los Angeles and Seattle.

The group performs covers of famous songs like “Amazing Grace,” “We are Family” and “Lean on Me,” in addition to original music written by Deering and Johnson.

The group rehearses once a week and performs up to 15 times a month. Since its inception, the choir has helped 27 members secure housing.

“The stories are so compelling and so sad,” Schutz says. “And yet the choir is so positive.”

Throughout the film, Schutz interviews 14 different choir members from all walks of life. Some have jobs, some don’t. Some have master’s degrees, others experienced horrific trauma as victims of abuse, rape or hate crimes. Others have disabilities or have been in and out of mental health facilities. There’s a veteran, a poet, a meth addict and a family of 10 who all live in one tent.

With a nine-month production schedule, there was an urgency to this film that Schutz didn’t have on previous projects. “Homelessness is such an emergency and tragedy in the country right now,” Schutz says. “I wanted people to know that homeless people are just like you and me, they are just like everybody, and how horrible and inhumane they are treated.”

Filming started in late August 2017 in the midst of a deadly Hepatitis A outbreak in San Diego that primarily affected the homeless population. Easily spread in unsanitary conditions, through fecal contamination or contact, the City has been admittedly short of public restrooms for years. All said and done, San Diego County Health and Human Services reported almost 600 cases, including close to 400 hospitalizations between September 2017 and the end of January 2018. Twenty people died.

More than anything, Schutz hopes the film humanizes people experiencing homelessness in a way that breaks down stereotypes and misconceptions.

“They’re human beings, we’ve got to treat them like human beings,” Schutz says. “We need solutions right away. My only advice, other than on a human level and treating them well, is to start a grassroots movement and only elect politicians that care about this.”

It’s not only a problem facing San Diego, she admits. According to the Denver Metro Homeless Initiative, there were just over 5,000 people experiencing homelessness in the seven metro-area counties in 2017. It’s estimated that there are 1,800 in Boulder.

“I guarantee if I made this movie in Boulder or Denver, I would get the same type of results,” Schutz says. “Every place could have a choir where these people can feel like human beings, at least for part of the day.”