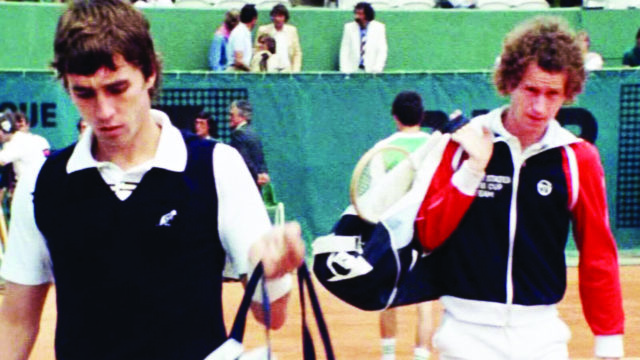 Paris, 1981: Björn Borg has five French Open grand slams under his belt and is looking for number six. Ivan Lendl is looking for his first. So is John McEnroe, on clay at least. Hana Mandlíková is looking to be the first Czechoslovakian woman to win it all at Roland Garros. The stage is set, the players are rolling in, and rain clouds are on the horizon. Let the 85th French Open begin.

Released by New York-based theater and streaming service Metrograph Pictures, William Klein’s 1982 documentary The French is a thing of beauty. Klein made the most of his all-access pass to the 14-day tournament, capturing the matches, the locker rooms, the press core and the audience with equal interest. Inside, Yannick Noah has his feet massaged and inspected while his trainer and manager discuss the health of his ligaments. Can he survive a match that goes into the fourth and fifth set? And, if so, could he do it on back-to-back days? Outside, McEnroe and his infamous temper harangue the umpire about the condition of the clay courts. Back in the locker room, two players, both eliminated, watch a women’s singles match and take bets on who will win. And, all the while, May rain clouds roll across the French sky.

There just isn’t anything like tennis. The players are like pitchers, batters and boxers all rolled into one. The good ones dictate the rhythm of the match. The greats get inside their opponent’s rhythm. And with no clock on the court, a player can be one point from elimination and still rally to win it all. That happens a lot in The French, and the beauty of Klein’s editing is his ability to compress matches into a series of shots and sounds. In one, the camera tracks across passive faces in the crowd while the umpire announces the victor of each game like a broken record. By the time the camera has settled back on the court, Victor Pecci is the one with his hands in the sky. The vanquished, Noah, was the crowd favorite, not to mention one of Klein’s primary subjects. Now he’s headed for the showers. So it goes in the game of tennis.

Unlike the bloated sports documentaries of today, The French is tightly edited into an exhilarating two hours. Though it might be a bit too tight: Outside of Mandlíková, the women’s side of the draw gets short shrift while the doubles tournament happens entirely off-screen. Still, what Klein conveys in The French is what makes tennis so perfectly tennis. Available through June 25 on Metrograph.com.

In 1965, Soviet filmmaker Sergei Parajanov was riding high following the critical and commercial success of the great Ukrainian film Shadows of Forgotten Ancestors. Tapped by the government to make a movie celebrating the 20th anniversary of the defeat of the German army, Parajanov shot a series of highly composed tableaus for what would be Kyiv Frescos. Unsurprisingly, the Soviets hated it and buried the footage for decades. Now, the surviving 15 minutes have been unearthed, restored and are available on KinoNow.com for free with a suggested donation to The Oleksandr Dovzhenko National Centre, Ukraine’s largest film archive. It’s a beautiful short, and donations will go a long way to help preserve Ukraine’s cinematic history.