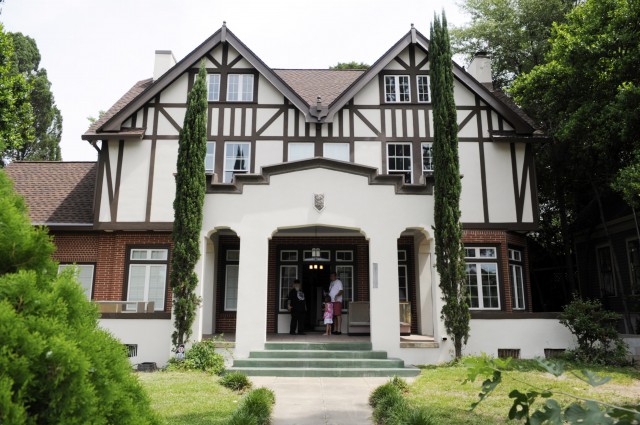 — The lyric inscription on what is no doubt the most psychedelic
security gate in these parts — “And The Road,” it reads, wrapped around
an enormous mushroom, “Goes On … Forever” — wasn’t entirely accurate
outside the at the Big House on Friday afternoon.

The Brothers themselves were in town for a gig — their first concert in 19 years — and they’d dropped back by their most hallowed haunt.

And it seems they can still stop traffic. Or at least slow it down.

A public works crew barricaded a lane of in front of so the few hundred or so Allman fans and onlookers on hand for the museum’s official ribbon-cutting would have plenty of room.

“We’re all just knocked out by this,” said from the recently opened museum’s front steps. The house was the band’s communal home in the early 1970s.

One of the band’s founding members, , said, “This morning I went around with a camera and kind of got a Butch’s view of , and just remembered what an absolutely unbelievable place this was.”

Said Trucks: “We came here, and for seven years we tore this place to pieces. Any of you guys remember ? Well, was the mayor … and we started making a lot of money and bringing
that into town so he kind of told the cops to leave us alone, just keep
us from killing each other. Once we figured that out, we took full
advantage of that. And then about 1976 they got a new mayor, and he
changed his mind and we all moved. So now we’re back.”

Fans from as far away as and , some of them following the band for a few concerts, stood on the Big House lawn across from for what was, at times, a front-porch revival.

“God bless you all. God bless the Allman Brothers.
This has just been a magical life,” Trucks said. “There is something
about music that nothing else can do. I walk onstage (for concerts) a
62-year-old really old guy and about halfway through the first song I’m
an 18-year-old Super Butch. And then about three hours later, I’m a
90-year-old and I can’t wait till the next night when Super Butch shows up again.”

Drummer Jaimoe Johnson, reminiscing about his years
in town and the renovation of the Big House, said, “I lived here for 19
years. I came here to play for the opening of
this (museum), and when I walked in that door there, it took my breath
away. It’s unbelievable what they’ve done in there.”

Someone in the crowd hollered, “God bless the Allman Brothers!”

When it came time to snip the ceremonial ribbon,
Trucks made it sound more like they were cutting a record. In a voice
deep and cool enough to kick off a blues lick, Trucks said, “One, two,
three, cut it!”

Mayor declared his allegiance to the Southern rock legends and told folks in
the yard below of his ancestral ties to the group. Or at least to one
its song’s namesakes.

“I’ve got one more connection to the . My great-grandmother was ,” Reichert said to wild applause, having invoked the name of the woman whose headstone inspired the tune “In Memory of .”

Then, with mid-afternoon traffic crawling past, the
mayor handed the band a key to the city, which bore the inscription
“For the , the road goes on forever, but we are pleased that they call , home.”