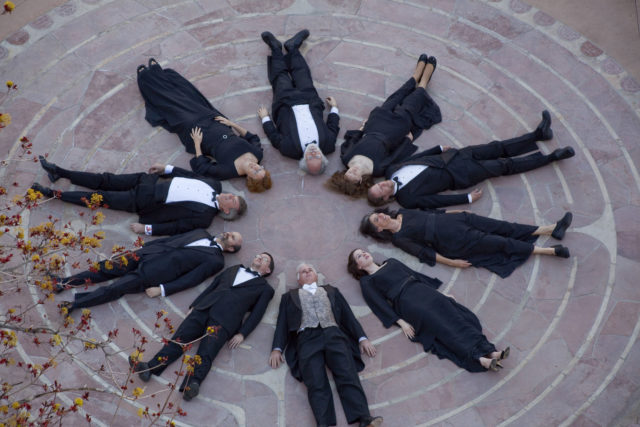 The year was approximately 1555, Lasso was in his 20s and Albrecht was one of the most important and powerful patrons of music in Europe. Lasso decided to write a set of choral pieces — motets — on the mystical Christian texts known as the Prophetiae Sibyllarum (Sybylline Prophecies) and write in the most advanced musical techniques of the time: harmonically complex and highly chromatic. It was a way of saying, “Look what I can do!”

Because the pieces are difficult, they have not been performed often. This makes them perfect for a concert called “Hidden Masterpieces of the Renaissance,” to be presented by conductor Thomas Edward Morgan and the Ars Nova singers, with the male quintet Solis as guests.

The concert will be sung a capella, with no instrumental accompaniment. In addition to music by Lasso, the “hidden masterpieces” will include pieces by John Taverner, Johannes Ockeghem, Orazio Vecchi, William Byrd and other 16th-century composers.

“It’s really a significant work in the history of music,” Morgan says of Lasso’s Prophetiae Sibyllarum. “It’s one of the most analyzed Renaissance pieces in terms of what the possibilities of chromaticism were, and has been described as 16th-century atonality. It’s fascinating to see how [far Lasso] was able to take chromaticism.

“It’s a demonstration of being able to move in ways that followed the rules, but in a way that other people didn’t. It was really to demonstrate his craft.”

Fascinating as it is, Lasso’s music doesn’t have the same impact it had when it was written. “You can do all the research to recreate the sound, but you can’t recreate the listener,” Morgan explains. “With all its chromaticism, [it] doesn’t sound as shocking to us as it would have to (16th-century audiences), because they hadn’t heard what we’ve heard. To me, it just sounds really fresh, especially for music of this era. It’s so original that it’s really interesting to do.”

If the Lasso is hidden by being rarely performed, another piece on the program has been completely hidden since the 16th century. The motet Benedicite Omnia by Vecchi was uncovered by Eric Harbeson, a CU music librarian and member of Ars Nova, in his research on Vecchi’s manuscripts.

“He edited a collection of Vecchi’s motets from original sources, and he hasn’t been able to find any evidence of Benedicite Omnia outside of the original sources,” Morgan says. “It doesn’t exist anywhere else. We’re fairly confident that is a piece that hasn’t been heard in 400 years.”

Several pieces have remained unknown because they call for an unusually large number of voices. “It’s fun to have a group that is able to undertake pieces that have multiple voices, because they’re rarely performed,” Morgan says. “I find that music very interesting to listen to, because it creates really rich textures that you don’t get out of four- or five-part motets.”

The largest piece on “Hidden Masterpieces” will be Deo Gratias by Ockeghem, a canon for 36 voices. “That’s a fun piece to do,” Morgan says. “It will end up being one (singer) on each part, since we’re doing the program with 40 or 41 voices.”

Another larger piece that Morgan is delighted to present is Lasso’s motet Mira Loquor for two choruses of five voices each. “I found this in my research, and this particular motet is really fascinating,” he says. “It’s a dialogue between St. Bernard and a questioner. One group asks questions like, ‘Bernard, do you not live?’ And the other choir responds, ‘I live.’ ‘Are you silent, or do you speak?’ ‘Both!’ So it goes back and forth between the groups.”

Presented as guests on the concert, Solis will perform two works by Vecchi, as well as sacred works by Carlo Gesualdo and Cristóbal de Morales. Made up of a counter-tenor, two tenors, a baritone and bass, Solis has focused on performing the sacred motets by Vecchi, who is better known for his secular madrigals, and other works of the Renaissance.

Morgan says, “I think we crafted a program that has a great deal of variety to it. The Lasso pieces, being very chromatic, are spare and the sound changes measure to measure, [whereas] the Ockeghem canon is one measure of harmony that evolves through the whole group. There’s a real contrast between that sharp focus and the full sound of the other pieces.”

Morgan suggests that more important than the variety is how the music can transport us beyond our everyday lives. “It’s an opportunity to hear music that is not widely known in the modern world,” he says.