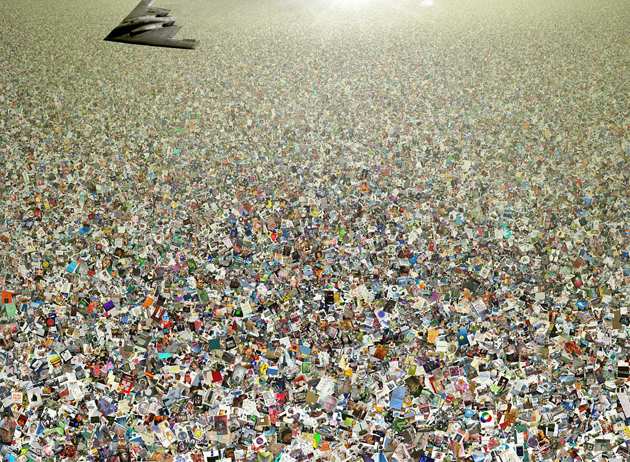 Art has an uncanny ability to cut clear through to who we are, where we’ve been and where we’re headed. That we’ve become so mired in technology as to make the relationship between humans and their data impossible to separate is the message poignantly posted on the walls of the Boulder Museum of Contemporary Art for their latest exhibition, The Art of Data.

When the idea arose to do an exhibition on databased art during a discussion between Seven Sacks, owner/director of Bitforms gallery in New York City and guest curator of The Art of Data, and Peter Hirshberg, chairman of the Re:Imagine Group and author of the exhibition’s essay, it seemed a bit “geeky,” Hirshberg says. But in the three years since, the national dialogue around personal data and privacy has been transformed by the information about the National Security Agency leaked by Edward Snowden. “Metadata” has become a household term. And we’re at least a little more curious about answers to the question latent in Rafael Lozano-Hemmer’s  “Performance Review UBS and HBSC” — large canvases covered in high-resolution images of fingerprints people easily gave away: Just how much of our personal, identifying information is out there to see and use?

“Dealing with data and how data is incredibly pervasive in society — it’s obviously controversial, but what we discovered is that it’s also a very interesting foundation for artists to use within the art practice, especially in this generation,” Sacks says.

“We’re kind of aware of the fact that we live in a completely instrumented world — everything we do gives out data, our cities are instrumented, and that’s kind of a change in the human condition and makes us rethink what it means to be human if everything is ordered and then we figure it out,” Hirshberg says. “Artists play a role in helping us work that through and process that.”

Work being done by artists now is not unlike work done by Andy Warhol and James Rosenquist in the 1960s that engaged with and helped audiences to reexamine the visual culture arising around them particularly as demonstrated in advertising and how that reflected an increasingly consumerist American culture.

The exhibition is also a survey on how artists express themselves in code, and while the works stand on their own as interesting, there’s essentially a metadata in their making that a viewer can’t help but find adds an irresistible layer to the work. Take “Net Blink” from Addie Wagenknecht — a suspended installation of brushed aluminum and PCB boards hung from the ceiling of the central gallery with loops of blinking LED lights descending from it. The lights are triggered by smart phones in the room transmitting data. Or her “Black Hawk Paint,” a striking black and white painting she completed with a drone fitted with a painting kit. Or Casey Reas’ “Pfft!” a video installation that processes analog TV broadcast signals captured from major networks through custom software that then transcribes them into a digital response. The result is a scrambled view that reduces the original image to total abstraction with only hints of the familiar.

How immersed are we meant to get in dissecting and comprehending the algorithms that rapidly begin to place demands on our best understanding of computer programming and perhaps calculus or astrophysics?

“Forget about the mathematical part, this is my brush and nobody’s interested in what my brush looks like,” says Manfred Mohr, whose “P-499- Am-2” is a single line as it would be displayed across many more planes than allowed in three dimensions while the video work “P-777B” lets those forms play out in video.

“I do a visual work and my result is visual, that’s what counts. If the visuals become interesting, it’s not important how I get it, really,” Mohr says. “The piece itself has to stand alone without having constantly to be referenced to how it was done because that’s only my problem. The viewer can be interested and ask me and I can explain, but that’s not the point of art.”

A keen look back at where we’ve been, and perhaps the best and easiest history lesson on American presidents around, comes in “Hindsight is always 20/20.” Artist R. Luke DuBois has taken the text from every state of the union speech given by an American president, run it through a program to identify the words that president used most — not just the most in that speech, but more than any other president, ever. The results are then laid out in an eye-chart format with the word most used by that president at the top in largest and boldest font.

“If you see them this way, it’s blindingly obvious what’s going on,” DuBois says.

The work was a commission for the 2008 Democratic National Convention in Denver, DuBois says, designed to test both the vision of these presidents and the way we view them now.

What it says about where we’ve been going — not in the last decade but over the last three hundred years — as DuBois says, is that “You can get from ‘gentlemen’ to ‘terror’ in 43 easy steps.”