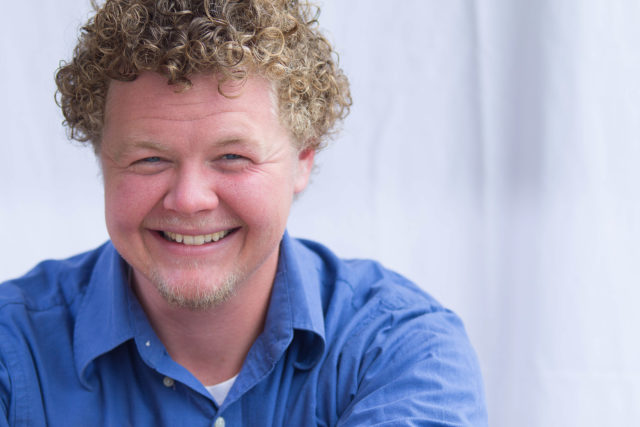 When Al Stafford began his transition from female to male, he realized that a lot of the conversations and performances attempting to narrate the transgender experience tended to be very negative.

“It was always these horrible stories, and I realized that wasn’t the trans experience that I wanted to have,” he says. “And it didn’t make sense to me because people transition to be happy, so why was it this horrible thing?”

Stafford has been acting and participating in theatrical events for decades. After beginning his transition, he found a platform in stand-up comedy to present an alternative view of what being trans looks like.

“The one thing I try to do with my show is to break the gender binary a bit more. I tend to be pretty gendered because I transitioned from female to male, whereas lots of trans people are somewhere in the middle,” he explains. “So I try to really include [the experiences] of all trans people.”

Over the years, Stafford’s comedy has evolved into a one-man show called “Inappropriate Questions by Inappropriate People” that he’s debuted in Fort Collins and all along the Front Range. He’s brought his show to PRIDE Festivals, to the university circuit and to open mic events. In all of these venues, he uses humor to help others who have made a transition of their own heal.

“Part of it is you go through puberty a second time; your mom calls you by two different pronouns within the same sentence. These funny situations just happen,” he says.

And he’s bringing his show to the 2016 Boulder International Fringe Festival, August 17-28.

“My piece looks at my transition from female to male and just sort of the different experiences I’ve had, but also how I interact with the world and how the world interacts and just getting to teach people better questions to ask,” he says. “It starts out like you’re at this training session for Gender 101 and as it goes along, I’m giving a PowerPoint presentation and there are these pre-recorded voices that interrupt and start asking questions as though from the audience.”

During his set, Stafford openly contemplates how to deal with the inappropriate and often downright rude questions that trans folks deal with every day. Except in this scenario, he breaks the social rules.

“I just say what I want to,” he says. In this scenario, he’s a superhero of wit and words.

This is Stafford’s fourth year at the Fringe, and he’s ready — excited, actually — for the intimacy of a small stage performance. It was in these intimate settings that Stafford was able to explore his own ideas of what theater is and how he can use this platform to tell his story and educate others, ultimately helping audiences to become even better allies to the transgender community.

“I really like theater that kind of expands how people think and what sort of turns things that people thought they know about on their sides and they can examine them a little closer,” he says.

That’s exactly what the Boulder International Fringe Festival sets out to do. It provides a place for stories that we don’t typically hear or have access to, but it also gives a place for audiences to experience art in a more intimate way. It allows audiences to engage, move forward and honor that experience, so we’re constantly growing as a community.

“Al Stafford, he’s really gracious about letting his experience be known. But that helps take care of other people, who wouldn’t or can’t or who are scared. So now there’s a voice. Someone who’s representing them,” says Alexis Cooley, executive director of the Boulder International Fringe Festival. “And it’s becoming something that people will go see and want to know more about. Fringe helps break barriers and tell new stories and explain how and why things are the way they are and sometimes that’s uncomfortable but it’s always necessary.”

Cooley began her career at the Fringe a decade ago as a performing artist. For her, the festival’s power lies in the stories of independent artists.

“Every artist is like the bravest person I’ve ever met,” she says. “And at any given time, the Fringe gives a home to artists who wouldn’t normally be given that opportunity. I think it’s because the festival itself gives a place for stories that we don’t hear or don’t have access to, but it also gives a place for audiences to experience art in a more intimate way. It allows audiences to engage more forward and keep that experience, so we’re constantly growing as a community and the community is challenged constantly.”

Over 12 days, the festival aims to produce 195 shows that Cooley assures will be wild with creativity. Shows will include music, art, dance, comedy, theater, puppet theater and clowns. At the Fringe, Cooley says everyone has a unique story to share.

“These [stories] automatically bring new vigor to what our community already has, which is phenomenal because now we’ve got new thoughts, new ideas, new ways of problem solving and then new art.”

Cooley says this year’s event will be the smallest geographic footprint ever in the history of the Boulder Fringe. This is partly because the festival isn’t using The Dairy Center for the Arts as a venue space this year, due to building renovations. Cooley describes these venues as “unconventional and quite exceptional.”

“We’re in churches, we’re in bookstores, we’re in dance studios,” she says. “We’re more fringe this year. Possibly the fringiest we’ve ever been.”

For the most part, the festival will take place along Pearl Street, from Free Motion Community Dance Center on 22nd Street, to Trident Booksellers and Cafe on 9th Street. Each venue is on the local bus route, and with no shows going over an hour, there’s no excuse not spend the day show hopping by bus or by foot.

“Boulder is small, but we’re fierce,” Cooley says. “We have these amazing patrons and audiences who will try something new and different. We’re hoping to create more of a place for that, that more people will be daring and go see shows that they may not know a lot about. Making it fun and safe but at the same time experiential and really engaging — that’s a big part of the Boulder Fringe.”

This year, Pine Street Church is a hot spot for performances, including several days of Boulder Burlesque, a conscious burlesque troupe. The troupe stemmed out of Jenna Noah’s master’s degree project at Naropa University in contemplative psychology. Now the current madame of Boulder Burlesque, Noah says she had this seed idea to create a dance modality that would bring together mindfulness group support and an honest conversation about the hidden aspects of sexuality. Today the troupe celebrates the sacredness of profanity.

“What really separates us from traditional burlesque is a lot of the dance pieces are really about people’s personal stories, like what they’ve been through, what they’ve felt and experienced through this wild thing we call sex and sexuality, in ways that are sometimes positive and sometimes not such positive experiences,” Noah says.

This is Boulder Burlesque’s second year at the Fringe Festival, and Noah can hardly contain her excitement about sharing her troupe’s work with the community. She says Fringe Fest audiences can expect dances that are romantic and dances that are rooted in some darker themes, like loss.

“It’s not your typical show where you’re just going there to be dazzled and entertained by tips and tassels,” she says. “It’s a show where there’s a lot of content that has a lot of meaning to the performers. And I think it’s a form of art in that way, specifically because it’s the dancer’s stories that are coming from their lives very often.”

Noah, or shall we say Madame, will also lead a workshop for the Fringe on Saturday, Aug. 20 at 12:30 p.m. During this hour-and-a-half workshop, the troupe will go through the basics of overcoming nerves and freeing the mind and body. She says the workshop is meant give patrons a confidence boost.

The Fringe Festival, as with all festivals of this type, is unjuried. Artists are chosen Hogwarts style, their names drawn from a giant, fringe-covered hat, so Cooley and Team Fringe have no idea what the exact lineup of shows will be. However, she does notice a theme of body image throughout the Fringe Festival entries this year.

“All of these shows are made up of brave, independent artists who are telling their stories, but they all seem to have this bit of a thread about being who you are and seeing the world as you see it,” she says. “And then we have people figuring out who they are in their own skin.”

Ultimately, the apparent theme of this year’s festival is being happy with yourself.

“And I don’t think there’s a better message to have right now,” Cooley says. “We can have lots of messages in this political time. But if we could all get to a place of comfort with who we are and the body we’re given, then maybe other things can start to be more real and be more conversation than reactionary.”

As a nonprofit, Boulder Fringe gives 100 percent of the ticket sales to the artists performing in the festival. And the organization is in the midst of transitioning to support independent artists year-round, not just for the festival circuit.

“We have a program called Venue in a Box, where we can offer to any artist very reasonable technical equipment, technical engineers, house managers, box office and now ticketing,” Cooley says. “So if someone wanted to do a house show or a concert or work at the church or produce something in the park, we can help them do that. That way there are more opportunities for our own local independent artists and that was what we felt was our commitment to our community year-round.”

The Venue in a Box program also provides artists with help increasing social media presence, writing press releases and other resources to enhance their professionalism.

Throughout the event, even the youngest Boulderites get to take a walk on the fringy side. This is the second year of Family Fringe, where programs, activities and, ultimately, the structure of the event are all created by children.

On the final day of the festival, Sunday, Aug. 28, there will be a ‘Best of Boulder Fringe’ at the Nomad Playhouse. The festival will present three awards to participants: a media award, an artist-choice award and an audience-choice award.

As in years before, fringe-goers can rate Fringe performances online. Audience members can go to boulderfringe.com and submit a review by creating a quick sign-in name and joining the fringe community in an unfiltered and unedited forum that provides fringers with the chance to recommend the shows they enjoyed to the rest of the Boulder community.

“Everyone’s a critic at the Fringe. You can say what you liked. You can say you didn’t like it. It’s OK,” Cooley says. “We don’t need to dance around comfort zones. Those are broken for everyone.”

On the Bill: International Boulder Fringe Festival. Aug. 17-28. Various times and locations along Pearl Street, from Free Motion Dance Center on 22nd Street to Trident Booksellers on 9th Street. For a full artist lineup and more information on the festival, visit boulderfringe.com.