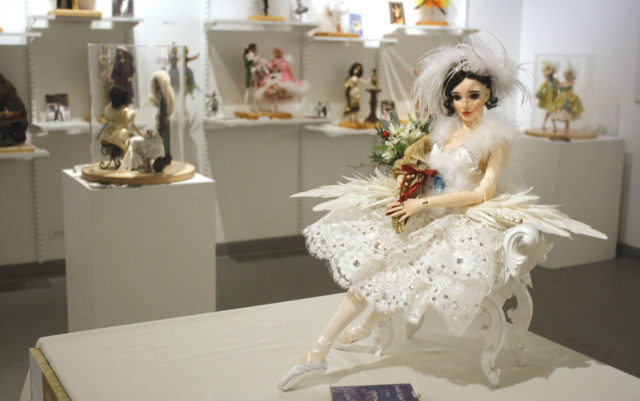 “My dancing belongs to the world,” Anna Pavlova once said. Yet almost a century after the ballerina’s death, many people have never heard of Pavlova or her dance company, which she used to bring ballet to the world. And that’s something Boulder artist Peggy Turchette wants to change.

“There were other dancers that were better, probably, there were other ballets that were more interesting, there was other music that has withstood the test of time, but her presence on the stage was unforgettable,” Turchette says. “People said they never forgot the experience.”

Turchette’s Pavlova Project is showing as part of the Diary Art Center’s We Are What We Wear exhibit featuring artists who use textiles to tell the story of people and places — whether that’s Jim Arendt’s story of Flint, Michigan, through his work with denim, Erika Diamond’s reaction to 2016’s Pulse nightclub shooting with her collection made of Kevlar, or Winnie van der Rijn and Noah Pica’s examination of the patriarchy through Oxford shirts. But Turchette’s work is really the foundation, the raison d’etre, of the entire exhibit, says Interim Curator Drew Austin.

Turchette recreates Pavlova’s life  — through her hand-sewn costumes and outfits displayed on dolls — from the earliest photograph of the young girl through her final performance: “Autumn Leaves,” a one-act ballet set to music by Chopin and choreographed by Pavlova, who last performed the piece in London in December 1930, six weeks before her death at the age of 49.

Formerly an illustrator, Turchette began the project about eight years ago, bridging her childhood love of ballet, dolls and sewing into a single artistic endeavor as she cared for her aging parents.

Using scrap fabrics from Boulder’s Elfriede’s Fine Fabrics, Turchette, who is self-taught, designed the costumes based off of old photographs of Pavlova. Some of the images are incredibly rare, others feature costumes, like “Christmas” and “The Sleeping Beauty” that are preserved in museum collections to this day. Throughout the show Turchette employs artistic license, using her vast amount of research to interpret black and white photographs and create colorful, detailed costumes and outfits that share Pavlova’s place in history.

“I realized that each costume has its own story,” Turchette says. “And I realized that if I put all the stories together in a chronological way, it would be a really unique way to tell [Pavlova’s] story to people who didn’t know who she was.”

Born in St. Petersburg in 1881, Pavlova set her sights on a ballet career after seeing Tchaikovsky’s The Sleeping Beauty at the age of 8. She studied at Russia’s Imperial Ballet School before joining the company and becoming prima ballerina a few years later. But it was a 1909 trip to Paris with Ballets Russes that changed Pavlova’s life.

Soon after, she moved to London and formed her own ballet company. What was once reserved for the royal families and high society of Europe became a performance art for everyone.

“She ran a ballet company at a time when ballet dancers were completely dependent on wealthy men’s support,” Turchette says. “But she broke out of that tradition, which really makes her an important early 20th century woman.”

Pavlova spent the next two decades traversing over 800,000 miles across six continents with her company, dancing in everything from tea rooms to salons to circus tents, often designing the costumes and choreographing the pieces herself.

“She certainly brought ballet to the United States and she was the most famous ballet dancer in the world during her time,” Turchette says. “Everyone knew who she was.”

It was a time of great upheaval: World War I came and went, the Bolshevik Revolution had taken over Pavlova’s homeland of Russia, and colonialism, with its white supremacist undertones, was the ideology of the day. And yet, wherever Pavlova went, be it Mexico or Japan or Thailand or India, she incorporated local culture and dance into her repertoire, creating a language all her own.

“The world was at war with itself and she believed that ballet could bring people together because it was not dependent on language,” Turchette says. “Everywhere she went, she embraced the people and the culture, which again, was very unusual.”

All in all there are about 100 dolls in costume as part of Turchette’s exhibit, the centerpiece being a recreation of Pavlova’s most well-known role, “The Swan.”

Turchette’s enthusiasm for her subject is palpable, much like the way her subject connected with her audience all those years ago.

“She didn’t have great technique,” Turchette says. “But she had emotion, which was not a part of ballet at that time. She definitely danced from the soul.”

The Pavlova Project: A Multi-Media Event Exploring The Life & Art of Anna Pavlova featuring artist Peggy Turchette and a performance of “The Swan” by Melissa Helsep with Boulder Ballet. 3 p.m. Monday, Dec. 29, Gordon Gamm Theater, Dairy Arts Center, 2590 Walnut St., Boulder. Tickets are $5-$10. ‘We Are What We Wear’ is on display through Jan. 12.