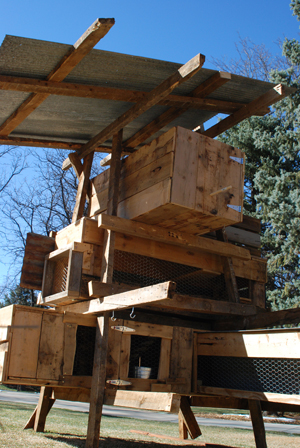 When was the last time you saw livestock frequenting a fine arts museum? I’m going to say never. Live farm animals might seem like an anomaly at an art exhibit, but as Boulderites swarmed the farmers’ market on Sept. 26, their sacks filled with organic produce, live chickens were clucking up a storm a few feet away at the opening of the Urban Chicken Coop Projects exhibit at the Boulder Museum of Contemporary Art (BMOCA).

The University of Colorado’s Art and Art History Department and College of Architecture and Urban Planning created an art installation that focuses on rural and urban aspects of chicken coops. The exhibit includes architecture students’ “Urban Hens Chicken Coops,” chicken coops built with an urban flair. And the Baseline Group, a CU fine arts group of undergrad and grad students, created “Chicken Shack Village” three chicken coops made from reclaimed materials accompanied by a photo essay. To add to the intrigue, the coops weren’t just for aesthetics: Live chickens were running in and out as part of the exhibit’s opening. Although these chickens were only present at the opening of the exhibit, they may make another appearance on a future Saturday. We can only hope.

Chickens were jutting their heads and clucking along to country harmonica music that buoyantly bounced off the walls. Hens plucked feed off the haycovered museum floor and groomed themselves as an orange rooster crowed and flapped his wings wildly with neck outstretched. A hen sauntered into one of the three coops made from reclaimed materials wooden shipping pallets and salvaged doors to lay an egg.

A modern, simplistic coop, painted gunmetal gray and designed by architecture students, sits in the opposite corner of the exhibit. This “flat pack” coop was designed for homeowners and suburban folk to facilitate backyard hen keeping. A large, semi-circle-shaped wooden chicken coop sits outside the museum’s entrance. Four of these models are already in the Boulder community at CU architecture instructor Rob Pyatt’s home, Shawnee Gardens, North Boulder Egg Cooperative, Community Roots Farm, and one is scheduled for Park Hill Elementary School.

The Baseline Group, led by CU Professor Richard Saxon, created the “Chicken Shack Village” photo spread and three chicken coops. Photos of hens in wood-and-wire coops and weathered barns define the traditional rural site and also introduce the idea of chickens and bucolic lifestyle into our very own backyards.

The basis of this exhibit: Can rural and urban life styles merge?

“The ‘Chicken Shack Village’ project was created as a way to challenge students to think about the rural and urban dilemma in today’s world. It was made to engage the public in a conversation about urban farming, rural art, and to present a larger metaphor for the ecological village,” Saxton says. “Through the students’ wall drawings, this temporary installation is placed in a larger historical and cultural context The re-imagining and reconciling of urban and rural coexistence will be one of the most important issues facing the 21st century. This involves questions of land and water use, food consumption, shelter and sustainability.”

“The ‘Chicken Shack Village’ says that sustainability is not something you can buy at the store or order through a magazine,” says Saxton. “It is something that is built by people together as a community and created in dialogue with their environments.”

Throughout the panel, the topic of community kept resurfacing. All speakers felt that rural practices, whether gardening, farming or raising chickens in your suburban backyard link people within a community.

As George Orwell used the metaphor of farm animals to speak to his community in his satirical Animal Farm, CU students use hens and chicken coops as a metaphor to speak to the community and to unite community. Thankfully though, these hens, unlike Orwell’s, don’t destroy their eggs.

Urban Chicken Coop Projects runs until Jan. 17, 2010, at the Boulder Museum of Contemporary Art. The exhibit is free on Saturdays during the farmers’ market, which runs through October. 1750 13th St.