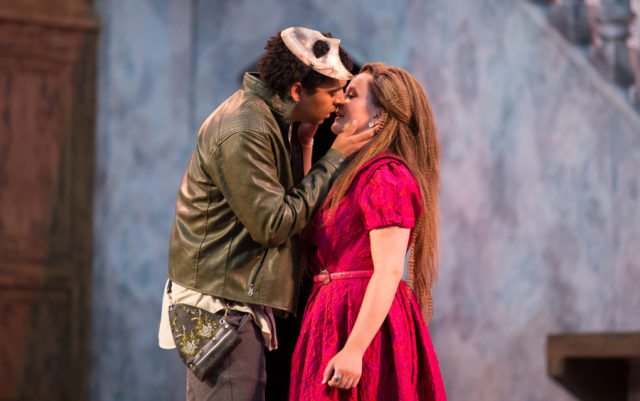 Is Romeo and Juliet a romance or a tragedy? It probably says a lot about the human condition that an overwhelming number of people see Romeo and Juliet’s relationship as one of the most epic romances of all time and, thus, the play as either a pure romance or perhaps a tragically-tinged one. All of this despite the fact that Romeo and Juliet has been adjudged a tragedy by Shakespeare scholars for centuries and, next to Hamlet, has one of the highest and most impactful main character body counts of any of the Bard’s works.

It would seem that Christopher DuVal, director of the 62nd Colorado Shakespeare Festival’s Romeo and Juliet, is a proud member of Team Tragedy. A quick read through the director’s notes discloses DuVal’s belief that Romeo and Juliet is far more Melpomeme than Thalia. DuVal’s position finds admittedly obvious support in Amanda Giguere’s accompanying dramaturg’s notes that tie the play’s “violent delights have violent ends” admonition to a broader view of Romeo and Juliet less as a love story and more as an exploration of violence and its effects on society.

Given DuVal’s perspective and seeming studied interest in violence — the man is, after all, a lauded fight choreographer — it should surprise exactly no one that his Romeo and Juliet is one of the most martial I’ve ever seen. The music could comfortably lead a regiment into battle. Actors don’t so much deliver their lines as shoot them from their mouths machine-gun style, and every pause is the smallest breath between fusillades of language and action. Under DuVal’s hyper-aggressive direction there are no unheated exchanges.

All of which makes Dante Rossi’s Romeo that much more perplexing. While the other actors seem to have a bet on who can gnash the most teeth and rend the most clothing, Rossi’s Romeo appears to have stumbled in from an unaired episode of Seinfeld. His unexpected acting choices inject some much needed levity into the otherwise dour proceedings, but the incongruity can be jarring at times. Seeing Kramer trade blows with Tybalt will do that.

In case you’ve somehow never been exposed to the most famous tragical romantical of all time, Romeo is a Montague, and Juliet (Madison Hart) is a Capulet. The two families are the Hatfields and McCoys of their time, yet Romeo falls anvil-hard for Juliet the first time he lays eyes on her, and Juliet reciprocates his affections. With the help of Friar Laurence (Gareth Saxe — excellent), who hopes the union will end the families’ feud, the two young teens quickly marry in secret. Before they can publicize their nuptials, more people on both sides die leading to Romeo’s exile and, ultimately, some of the most memorable and heart wrenching death scenes of all time.

Is this year’s Colorado Shakespeare Festival’s Romeo and Juliet the best I’ve ever seen? No. Is it the worst? Far from it. Which means it’s squarely in the middle third of the bell curve as one might statistically expect. It will thrill some, leave some less than satisfied, and serve as a perfectly serviceable introduction to live Shakespeare for many audience members.

Director Duval succeeds at the exceedingly difficult task of putting his own stamp on material this well-known and well-worn. Whether that vision will thrill or disappoint remains the province of each audience member. Those who share DuVal’s preoccupation with violence and would swear on a stack of Riversides that Romeo and Juliet is a tragedy tangentially touching on romance will, I suppose, enjoy it significantly more than those who find the play more a tale of love than a tale of woe.

The opportunity to see Romeo and Juliet performed outside under a starry sky, though, cannot be overvalued. Like going to at least one concert at Red Rocks, seeing at least one Shakespeare play at the Mary Rippon Outdoor Theatre on the University of Colorado’s campus should be on every one in Boulder County’s bucket list.