Melanie Yazzie is an artist. She’s a painter, printmaker, sculptor, jewelry designer and an art teacher. As the head of printmaking at the University of Colorado, her most important piece of advice for her students is to make art every day — words she lives by.

“I have four new pieces over there,” Yazzie says, gesturing to a nearby table in her classroom as she’s mopping up an ink pile left behind by a student new to printmaking.

“I’ve been making work for over 30 years now, so it’s all the same — different facets of my story in different ways. It might be a pen and ink drawing, it might be a print, it might be a painting, it could be a sculpture work. But because I’ve been doing it so long, I can go into any of those mediums and make the work I need to tell my story.”

Yazzie has two new exhibits at The Dairy Arts Center, both showing through Sept. 25. In Early Dawn, Yazzie conceptualizes a time period, she says, that is very sacred to her Navajo culture. The work is about waking up early and going for walks, where she can pray, give thanks, ask for good in the world and create balance.

“There are different lines that look like river waves and pathways. They are speaking about travel, about the river, how it goes through the land, but also about our internal sides, like the intestines,” she says. “It’s like how the land is like the body, and how you should respect the land and also respect your body.”

For Internal Pathways, Yazzie looks to the body again. The series deals with her diagnosis with type 2 diabetes, which she’s been living with for six years. The artwork reflects on the time she had a camera inserted to check for cancerous cells. For the work, she uses pinks and reds to elicit those interior landscapes, and she focuses on circular shapes.

“A lot of the circles represent that whole process for me of thinking that nothing bad is growing and that things are clean and healthy,” she says. “Because when they put the camera inside you, they’re looking for polyps, which are these little points. So you always want a clean image.’”

Diabetes is runs in her family, and it’s a problem in Native American communities. According to the American Diabetes Association, American Indians are 2.2 times more likely to have diabetes compared to non-Hispanic whites. But even though the numbers are higher for Native Americans, addressing that is not Yazzie’s purpose with her work.

“Yes, it’s a fact that different minority cultures have a higher risk of living with diabetes,” she says. “But I don’t really focus on the statistics or the history, it’s more of a personal story that I’m working with.”

Yazzie has always been drawn to the personal with her work, especially drawing from her own culture.

“It’s from where I come from,” Yazzie says. “All the traditions and stories and ways in which make me a Navajo woman have me see the better sides of what’s happening in the world.”

“When people hear I’m an artist they think I make traditional jewelry, that I’m a traditional Navajo weaver, that I do sand painting, that I paint on drums, that I do bead work,” she says. “Then when I tell them I’m a print maker and a painter and that I do abstract contemporary work, I think people at times are disappointed because they have this idea they were meeting this ‘Native artist.’ When I’m not making these ‘Native’ things, they’re disillusioned.”

But when people hear more about the reasoning behind their artwork, she says, they start to understand her perspective. The artwork she makes attempts to humanize herself and present issues that she intimately deals with.

“[My art] deconstructs that idea of what a Native American should be or what our artwork should look like,” she says. “They get to know me on a personal level, as opposed to the pointing action of, ‘Oh, that’s a Native American, that’s a teepee,’ or some object that we get paired with, a headdress, a drum, imagery like that. I don’t have that really in my artwork. There are different things I use, my own symbols and images.”

When she first started making art, her work was confrontational — challenging preconceived notions and damaging perceptions. In one series she dealt with blood quantum, using images of her certificate of Indian blood, which shows she’s four-fourths Navaho and has her census number from the tribe on it.

“There was a lot of people who were afraid of the Native angry person and would sort of turn off. And then I’d [only] be speaking to the choir, people who really understood my work,” she says.

“But there were people who didn’t know what a reservation was or why being Native was important or just people who were ignorant of different ways of being in the world.

“And I realized if I made work that wasn’t as confrontational then I could reach those people and educate them more. We could come to a place of having a conversation that might not have happened if I had this work that was really in your face.”

She wants her work to serve educational purposes, and she now focuses on presenting her ideas with more positivity, like her Early Dawn series. The shift didn’t just take place in her art. Yazzie says she’s become less angry overall. She says now she makes work from a calmer place.

This also allows more room for patience, which she says as a minority person, is very hard to have. She still gets frustrated with waiting for tolerance, but she says she has hope.

“At times, it makes me feel like there’s not much you can do to make a change,” she continues. “But I think with my work, if it’s hopeful and helping people see something positive, that’ll help give them the strength to deal with something that’s not so positive.”

Yazzie goes beyond her work to foster understanding throughout the world. She’s facilitated many cultural exchanges of various art forms between galleries and has hosted several artists from multiple countries in her home.

She’s also spent years traveling the globe to meet other indigenous people in the U.S., New Zealand, the Arctic, Russia and more. Through getting to know different people raised in similar circumstances, Yazzie says she’s realized how many similarities we all share.

“It’s the way each of us deals with that in our culture that makes it a little different,” she says. “But there’s a love for land, a love for family, a love for identity.”

She hopes through her work to create a sense of community using art as a means of expression.

“Through storytelling and songs and art-making there’s a connection,” she says. “There’s a bridge. And when we make that connection, it’s a way of supporting each other as human beings and people.” 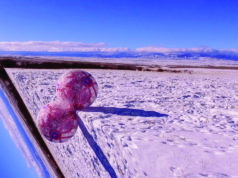