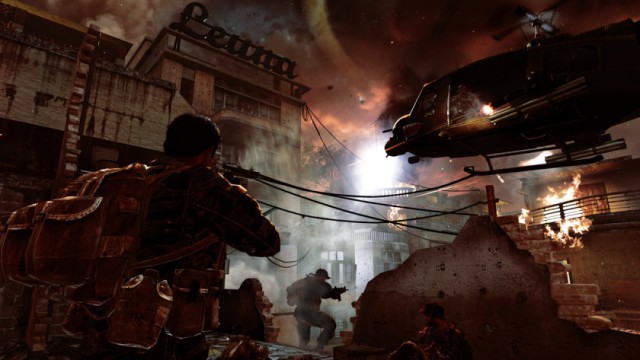 Call of Duty: Black Ops, a first-person shooter developed by Treyarch, not only exceeds expectations but is on the same level if not beyond previous Call of Duty games produced by Infinity Ward. The game takes place in the ’60s in the middle of the Cold War, during JFK’s presidency, the Bay of Pigs Invasion and at the cusp of the Vietnam war. You mostly play as Alex Mason, a special forces operative being held captive by unknown people whilst being tortured and forced to give  details about missions he was working during the last few years. You play as Mason during those missions as he tells the story in flashbacks, along with other characters throughout the game. The story is innovative and captivating and pretty much the best of the series so far. The narrative sucks you in more than any previous Call of Duty game and could easily be transformed into a summer blockbuster movie. Without spoiling the story too much, the missions take you all over the world from Cuba and Russia to Laos and Vietnam. And to help push the story along, there’s excellent voice acting from Sam Worthington, Ed Harris, Gary Oldham, Ice Cube, Topher Grace and Emmanuelle Chiriqui.

As with every Call of Duty game, the presentation is amazing. Whether you’re inside a building clearing it out or outside in a Russian prison camp, the graphics, environments and animation of the characters are amazing. Especially during the fast-paced scenes, the game is so engrossing and intense.

In addition to the campaign, multi-player is as fresh as ever. Online multi-player retains a lot of the favorites from previous games but also added quite a bit of customization. You can customize a character from head-to-toe as well as a character’s weapons. You can also earn different types of weapons like explosive RC cars, helicopters, and guided missiles. The longevity of this game seems endless. But if that isn’t enough, Zombie Mode from World at War returns, and this time you can play as John F. Kennedy, Richard Nixon, Fidel Castro and Robert McNamara. Could you ask for anything more?

For those of you worried about the future of the franchise, don’t fret, it’s in capable hands. Black Ops is a must-have game.(Side-note: Parents, the game is M-rated and not suitable for children).