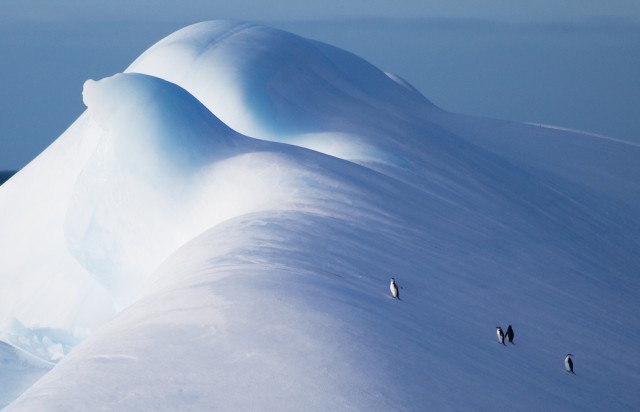 If a photograph is a mere snapshot in time, the caption becomes the clock face of history. Being able to read both can illustrate our understanding of the world.

The University of Colorado Museum of Natural History is presenting a free lecture titled “Polar Animals and Their Changing Climate: A Visual and Educational Tour of Earth’s Iciest Regions.” The Dec. 4 presentation features the work of Boulder-based photographer Glen Delman, accompanied by narration from Community College of Colorado physical geology professor Maureen Berlin.

Delman, a professional photographer and outdoors lover, chose the photos for the Polar Animals slideshow from trips to the Arctic and Antarctica on behalf of an adventure travel company. He was contacted for the event by museum staff, which will be using his work during the lecture to help illustrate how the delicate ecosystems of the Earth’s polar regions are affected by global climate change.

Photographs from the Arctic include polar bears readying for the hunt, an arctic fox on the prowl and snowy owls keeping an eye on things. His pictures from Antarctica feature icebergs, elephant seals and molting Emperor penguins. The pictures are stark and beautiful, and, in the process of taking them, the photographer learned to adapt to the environment around him, much like the animals he shoots.

“In the Arctic, the animals react,” Delman says of the congeniality of the native species. “The polar bears, wolves and such are pretty wary for the most part. In the Antarctic, they don’t have any land predators down there, so you can walk right up to them.

“Being with the animals and capturing them in their native habitat is pretty exciting,” Delman continues. “I think it’s really exciting to be with the Antarctic animals. For example, I would be three feet away from some penguins and they would act like I wasn’t even there.”

Despite the stunning images on hand, gathering them isn’t as glossy as the subject matter might appear. It takes a keen eye for detail and a bit of patience to deliver professional-grade photography. Adjusting a camera to be ready to take pictures pales in comparison to the intricacies Mother Nature and wildlife provide in getting the right shot. As such, the hit rate for a professional photographer is lower than the worst professional baseball player.

“Once I go through my pictures I get rid of about 90 percent of what I take,” Delman says of his shutter success rate.

“On the Antarctic trip, for example, I got about 400 usable pictures out of 10,000 that I took,” and of those pictures, “I might get a dozen really killer ones.”

It will be those home-run pictures that will be part of the Museum of Natural History lecture.

“Generally when I get a photograph that’s good, I know it, and I get so excited I can’t wait to see it,” Delman says of his intuition while working. That being said, “every once in a while I’ll get a surprise photograph show up.”

Some of the data provided in the lecture may be surprising to those who avoid global climate talk in favor of pretty penguins. Berlin, who earned her Ph.D. in geological sciences from the University of Colorado Boulder, is using the animals and locations of Delman’s pictures to give insight into how this other world interacts with the one we know.

“What I try to do is provide some background science on how these polar regions are changing, how we measure change, and then what the impacts of that change are on the habitat for these different animals.”

Rather than interpret models or predictions on the future, Berlin will concentrate on the data at hand. While there will be no extrapolation of rising sea temperatures into a doomsday scenario, she plans to point out observable data of how these habitats have changed. As for where the data comes from, Berlin says that wherever possible she’ll try to mention research by local Boulder folks.

“We have the university and many labs around here that are conducting this research on climate change, so I’ll try to highlight the information our community has found,” Berlin says.