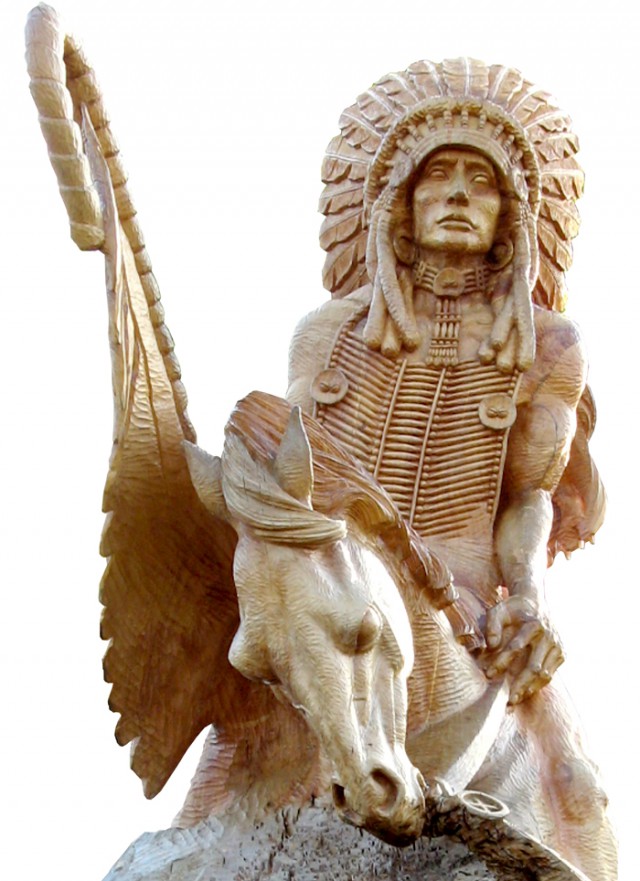 The story of the city of Boulder has a sordid side.

It starts with the first white men settling onto the land, a Native American Arapaho peace chief seeking coexistence with the new inhabitants, and his eventual death during the Sand Creek Massacre at the hands of the white men he had hoped to make peace with.

Now, a new community effort, One Action-One Boulder (OAOB), hopes to remind Boulder residents of its past while working to build stronger equity within the city. The year-long educational effort is being called “Niwot’s Arrow,” for Chief Niwot, and it includes, among other events, a multimedia performance, Rocks Karma Arrows, created by Kirsten Wilson, and an exhibit at the Boulder History Museum, curated by Julie Schumaker.

Before Boulder was ever Boulder, the valley where the city now sits was nothing but healthy grassland, where elk roamed freely and ancient tribes lived off the land. In the mid-1800s, Chief Niwot — whose name means “left hand” in English — was peace chief of an Arapaho band who worked tirelessly to create mutual respect at a time when what had been Native American land was being claimed by white settlers. Schumaker says Niwot’s tribe would often trek from Boulder Valley to Denver to trade with the settlers. Being one of the few Native Americans who spoke English — a skill Schumaker attributes to trapper John Poisal, a 24-year-old Kentuckian who married Niwot’s sister and taught him to speak English at a young age — Niwot established amicable relations with the white men.

But with a rush for land and the Colorado Gold Rush in 1858, more settlers flooded the plains, causing relations between the ancient tribes and settlers to tense.

What was at first tension soon turned into a tumultuous relationship between Native American tribes and the Caucasian colonizers. White settlers soon invoked the Doctrine of Discovery, a law Schumaker says allowed them to stake a claim to any land they found, regardless of any tribes already present. Native American tribes were raided often as hostilities grew, yet despite many young warriors — both Arapaho and Cheyenne — urging war, Schumaker says elders like Chief Niwot, Black Kettle, White Antelope and Little Raven argued that fighting would only destroy their way of life faster. Even as Native Americans were being attacked by the oncoming hordes of settlers and their food sources depleted as city expansions continued, Niwot and his band stayed on course, hoping to rally support from the few whites sympathetic to their cause, Wilson says.

But their efforts ended in tragedy. On Nov. 29, 1864, the peace chiefs assembled with their tribes at Fort Lyon. Led by Black Kettle and Niwot, more than 100 Native Americans — primarily women and children — made the journey to participate in what they thought would be peace negotiations. Wilson says that despite military personnel being told to regard the camps as friendly, the Colorado Cavalry, under the command of Col. John Chivington, opened fire on the peaceful band. The U.S. government would later call the ensuing slaughter the Sand Creek Massacre. And though the U.S. government would soon apologize, shortly after the massacre Col.

Chivington paraded through the streets of Denver on his horse, displaying the scalps of Native Americans he and his men had killed.

This is part of Boulder’s history that One Action-One Boulder is trying to distill. Schumaker says creating the Boulder History Museum exhibit at first proved difficult because there are no known photographs of Chief Niwot.

Luckily, the Boulder History Museum got help from Margaret Coel, author of Chief Left Hand and guest curator for the exhibit.

“Coel had done intensive research in the ’70s on Chief Left Hand, having lived here in Boulder and knowing somewhat about him,” Schumaker says. “But she realized his story had not been told. So she really delved into the history of Niwot and dug up many historical documents, as she had always liked the Arapaho culture. Having her on board, having already done so much of the preliminary research, was a great help.”

Using documents and diary entries, the Boulder History Museum has managed to create an exhibit that showcases the impact Chief Niwot’s legacy has had on Boulder.

Wilson, production director for OAOB, says telling Chief Niwot’s story is about learning history to understand the present in a deeper way.

“We want people to learn about our history that is often untold, talk about it, and take an action to make a more equitable Boulder,” Wilson says. “So it’s really looking at the history, the true problems that created the situation we had here and what we may want to do to answer those problems so they don’t manifest in the future.”

Issues like racial and economic injustice are what Wilson says she and OAOB hope to bring to the Boulder conversation through Chief Niwot’s story.

Part of telling that story involves Rocks Karma Arrows, which is currently playing at the Black Box Theater in the ATLAS building on the CU campus. Rocks Karma Arrows examines Boulder’s history through the lens of Chief Niwot’s quest for peace and eventual death. Using projection screens that span the length of the stage, Rocks Karma Arrows shows historical photographs of Boulder in the time of the Arapaho while using local Colorado historians to narrate the unfolding story of the Sand Creek Massacre.

With its small stage, few seats and isolation three floors underground, the Black Box Theater is an intimate room. Live music brings a Western ambience to the production as interpretative dancers reenact the struggles of Native Americans. With Wilson leading the discussion, occasionally breaking the fourth wall to connect with both the actors and the audience, Rocks Karma Arrows becomes less about Boulder’s rocky history and more about what we can do to make our town a more equitable and welcoming place for all races and classes.

“It’s really powerful to know your history,” Wilson says. “It’s really a gift to walk through the mountains and know these mountains once belonged to other people, and you can practically feel the energy of all the lives that have gone into the ground on which we walk, and that’s an investment. I hope that people will love and appreciate the earth more knowing all the people who really sacrificed for it.”