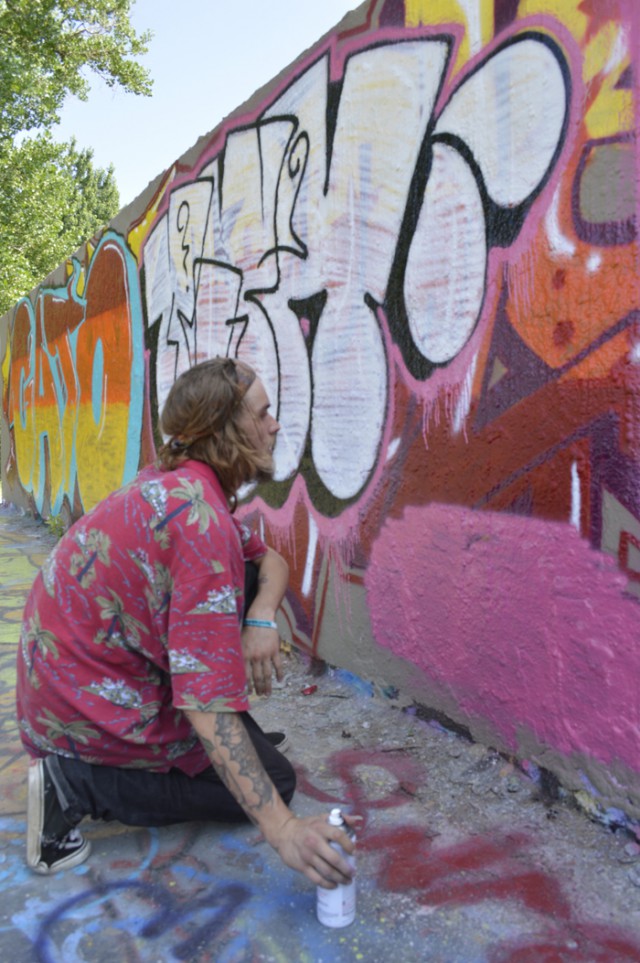 Anyone who has driven down 30th Street has probably seen it out their window. But in case you’ve never stopped for a closer look, the brightly colored slab of concrete next to the skatepark in Scott Carpenter Park is a penalty-free place for graffiti: the Boulder Freewall.

It was first thought up in 1997 by a couple of teenagers who wanted people to express themselves artistically without getting in trouble: 18-year-old Winston Cressman and 16-year-old Jory Rabinovitz. According to Vanessa Sehatz, communications specialist with Boulder’s Parks and Recreational Department, the pair brought their idea to the city’s Youth Opportunities Advisory Board and had it approved by Boulder City Council in 1999, along with the rules of no profanity or nudity, and that artists must respect their neighbors.

The wall, along with the adjacent skatepark, was erected by late 2000.

Since then artists have come and gone, using their own paint to cover up previous work and start anew, creating a public work of art that changes almost constantly.

Boulder Weekly spent the month of July tracking how the wall evolved and speaking with the artists who visit it.

Push, as he likes to call himself, is 20 now. He picked up graffiti art at 13 when he and his “homies” started messing around with it in Little Rock, Arkansas.

“It’s like therapy sort of. It just lets you clear your mind,” he says. “I don’t really pay attention to what anyone else is doing. I just do it for myself.”

Push said the experience of painting at the wall is very different from the streets.

“There’s no rush when you’re doing it out here,” he said. “You know that you’re not going to go to jail. Plus, you don’t get to drive by the next day and say, ‘Yes, I did that; I got that there.’ It’s just a legal wall, you’re not getting away with anything. It’s a lot safer.” Push says graffiti art is more appropriate in Denver where everything is “a lot less nice,” because the graffiti makes the “rotting streets” beautiful again.

The evolution of his bubble letters is a source of joy for Push, and he says there is nothing but good vibes when he paints with his friends. The friends painting the word “Gato”  with him asked to remain anonymous.

More colorful artwork on the south side of the wall painted by a few artists not present.

On a sunny day two weeks later, no artists were present at the wall but an artist painted the word “Grems” in black and yellow over a grey backdrop. “Gato” struck again, this time writing the tag in black, blue, red and white. The south side of the wall changed as well and was covered in a pink backdrop with “Push” written largely in white bubble letters with black, neon green and orange trims. “Spager” was also written largely using the same colors but a different font (a possible different artist).

Omar Lozano, 21 said he was always artistic and drew a lot when he was a kid. He experiments with pottery and pencil but says he fell in love with graffiti art in California when he was 13.

“A lot of kids start, when they first do graffiti the first thing they do is pick up a can and hit the streets,” he said. “I wish they would learn, I guess, you know what I mean, pick up some stuff before they actually went out and tried and like hit the streets. I just feel like that gives other graffiti artists a bad name.”

Lozano said the free wall is not very good to work on because it is not a flat surface. He wasn’t drawing anything in particular and it was his first time coming back in a couple of months when he saw his friend Keenan had extra paint. “There’s always gonna be that side of graffiti where you rebel and you go out and do what you’re not supposed to be doing,” he says. “But at the same time you gotta get good somewhere. You can’t go out in the streets and take your time and do a three, four hour piece out in the streets. That’s what nice about legal walls, you don’t have to worry about anything.”

Lozano says Boulder is open minded but wishes there were more free walls around town. There was an abandoned place on Valmont he used to frequent, but it was bought out. As for influences, he enjoys local artist “Taste,” internationally recognized artist “Mad C,” and UK-based artist/activist/film director “Banksy.”

On the south side of the wall this day, the “Spager” piece was still left up but a new tag replaced “Push” that appeared to say “ARLST” in red, orange and black over a white backdrop.

Lafayette’s Keenan Huber, 21 started graffiti art at 14. He was always driven to art from a young age and also does canvas, murals and galaxy art, but graffiti is his focal point.

“It’s a way to release stress. It’s almost kind of like a meditation, like, be one with yourself and forget about everything that’s around you, just focus on what you’re doing, not everybody else around you,” he said. “I just like to go with it and let it be what it is.”

Huber said the grey letters he wrote that appeared to say “DUNE” had no meaning in particular. He comes to the wall occasionally and calls it “kind of shitty,” because it is old with a lot of bubbles. Huber said graffiti gets a bad rep from a younger generation with no respect and that there is good graffiti that promotes youth and community, and bad graffiti that represents gangs and vandalism.

“I feel like graffiti is looked upon as like, more urban, and Boulder is kind of uppity, yuppity type area, but I do appreciate that they have a wall here,” he said. “I wish there were walls in every city. I think it keeps graffiti off the streets. People would be more inclined to do pieces rather than vandalize.”

Huber paints the word “DUNE” in large letters across much of the wall. Painters at the freewall are constantly covering up one another’s work and starting from scratch.

Paint chips and a rough texture illustrate the current condition of Boulder’s freewall.

One artist who wished to remain anonymous was spray painting over a piece on the south side of the wall. On the north side of the wall a few new pieces had emerged, including one with black and blue letters that seemed to read “MESX.”