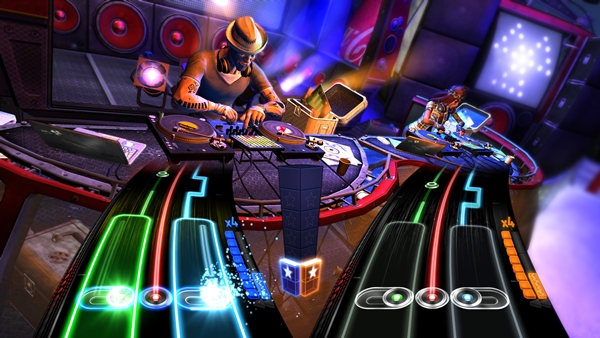 DJ Hero may not have been the sales phenomenon that Activision was hoping it would be last year, you know, like how Guitar Hero grew to be. But the publisher is sticking by the franchise with DJ Hero 2.

One of the selling points of DJ Hero were the incredible mixes and mash-ups of hit songs that made up the tracklist and with DJ Hero 2, it is once again the biggest attraction. DJ Hero 2 boasts 83 new tracks that feature everyone from Eminem and Lil Wayne to Lady Gaga and David Guetta all mixed and mashed together to make some great party tracks not found anywhere else. The tracklist is still the star of the game and this iteration is just as good, if not better than part one.

The gameplay sticks with the same foundation with players keeping in time with the beats, scratches and crossfading on the turntable controller. The few additions to the gameplay include “freestyle” scratching where you’re given moments during a song to improvise you’re scratching and improvisational crossfading where you can switch from one song to the other and mix during a section of the song. While the additions are appreciated, the freestyle scratching leaves much to be desired. Although there’s supposed to different types of scratches you can perform during these sections based on how fast you scratch and if you’re on beat, it’s basically the same sound every time. The crossfading is solid though and always one of the best parts of playing the songs. Another cool thing added to DJ Hero 2 is the continuous sets. In DJ Hero, you played song by song, start to finish. In DJ Hero 2, its one continuous set that feature three or four songs, you know, like you were spinning a real set at a club.

DJ Hero 2 also added the option of vocals. Yes, you can sing along with the mash-ups and mixes but the thing is the songs aren’t created for straight singing. The vocals are cut up, scratched and rewinded that even if you knew the lyrics to the songs, it’d be difficult to keep up and anticipate the change-ups during the songs. Only after multiple listens can someone probably get the hang of it.

Overall, graphically the game looks just as good as DJ Hero with new characters like DJ Q-Bert, RZA, Deadmau5, Tiesto, and David Guetta that you compete against and can later play as. But if you loved DJ Hero, you definitely won’t be disappointed. We’re not sure if this is a “must-have,” but if you’re interested, you won’t feel like you wasted your money.